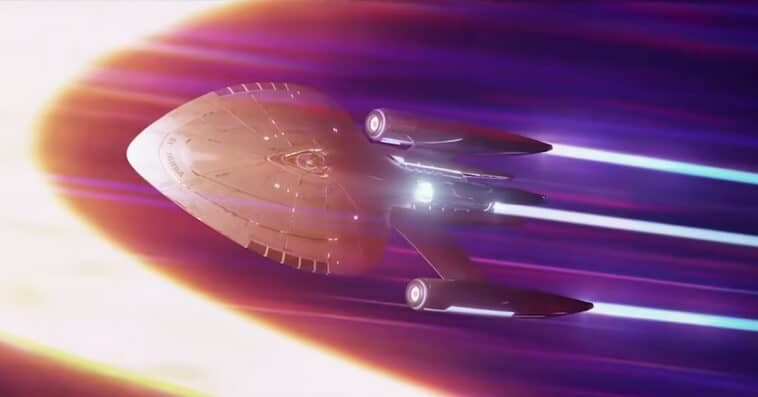 The opening title sequence for Star Trek: Prodigy has been released on Tuesday during Paramount+’s virtual Television Critics Association presentation.

“I am excited that I had the opportunity to write the main theme for Kevin and Dan’s latest project, and as always am thrilled to be a part of the Star Trek family,” said Giacchino, who gave a special shoutout to Star Trek: Prodigy composer Nami Melumad. “I’m especially looking forward to everyone hearing the incredible work of composer Nami Melumad, who will take the reins of scoring the episodes. Not only is she extremely talented, she is a true Star Trek fan.”

There's a new ship in the galaxy. Check out the opening credits of @Nickelodeon's #StarTrekProdigy, coming soon to @ParamountPlus. pic.twitter.com/1DxZAtEGZn

In addition to the show’s main title sequence, first-look photos of the show’s primary villains ― The Diviner (John Noble) and Drednok (Jimmi Simpson) ― were also unveiled during the panel.

A ruthless tyrant who controls the asteroid of Tars Lamora, The Diviner exploits wayward species and will stop at nothing in his hunt for the Protostar ship, no matter the cost. Though his goals are shrouded in mystery, his body is failing him and he created his progeny, Gwyn (Ella Purnell), to one day carry on his mission when she is ready for it.

Drednok, meanwhile, is The Diviner’s deadly robotic enforcer. Heartless and cold, Drednok has a sole purpose to keep The Diviner on task and ensure that the Protostar is found. Drednok is a friend to no one, including The Diviner’s own daughter Gwyn and uses his menacing spider-like form to impose The Diviner’s will.

Set in 2383, after the events of Star Trek: Voyager, Star Trek: Prodigy follows six young aliens ― Gwyn, Dal (Brett Gray), Jankom Pog (Jason Mantzoukas), Murf (Dee Bradley Baker), Zero (Angus Imrie), and Rok-Tahk (Rylee Alazraqui) ― who discover a derelict Starfleet ship and use it to search for adventure, meaning, and salvation. These alien outcasts know nothing about the abandoned ship they commandeer, but over the course of their adventures together, they will each be introduced to Starfleet and the ideals it represents. Kate Mulgrew, who played Kathryn Janeway in Star Trek: Voyager will appear in the new series as the starship’s built-in emergency training hologram.

Produced by the Nickelodeon Animation Studio and CBS Studios, Star Trek: Prodigy will premiere on Paramount+ later this year before airing on Nickelodeon. More details about the animated series are expected to be revealed during Paramount+’s Star Trek Day live presentation on September 8th.