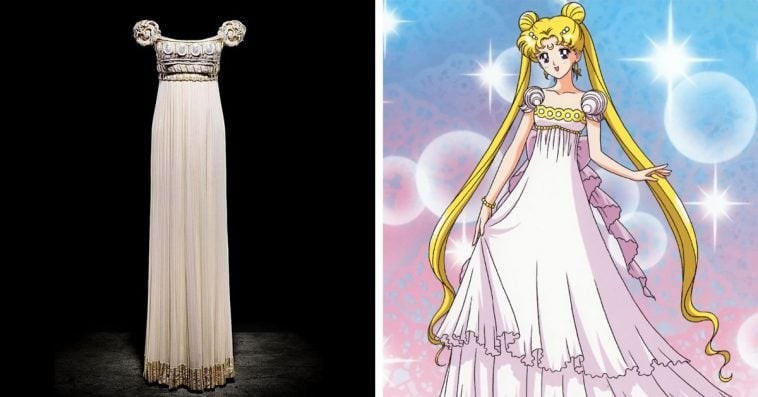 A Sailor Moon fan went viral earlier this month when she found the original Dior dress that inspired Princess Serenity’s outfit in the Japanese manga and anime series.

The fan that goes by the Twitter handle @eunjeechong recently checked out the Dior: From Paris to the World exhibit at the Dallas Museum of Art, and it was there where she spotted a dress similar to Princess Serenity’s attire in the Sailor Moon manga and anime series.

museum worker: you seem very excited are you studying fashion? 🙂

Based on her tweet, @eunjeechong seemed to think that the similarity between the two was just a coincidence, but the truth is, the dress at the exhibit is the actual inspiration behind Princess Serenity’s costume.

Designed by Gianfranco Ferré for Dior sometime between 1986 and 1996, the Palladio dress features a floor-length flowy skirt, an ornate top, and off-the-shoulder bell sleeves that look like Greek pillars.

Unbeknownst to many, Sailor Moon creator Naoko Takeuchi loves haute fashion, and that explains why a lot of the characters she made are wearing attires inspired by creations of high-end fashion designers.

To prove this, fellow Sailor Moon fan @colorofsakura made a series of comments on @eunjeechong’s tweet, pointing out that Catzi’s outfit from The Black Moon arc is inspired by a 1992 Thierry Mugler dress while Avery’s outfit is based on a 1992 Christian LaCroix creation.

@colorofsakura added that Queen Beryl’s dress is based on another 1992 Mugler garb, and Black Lady’s outfit is loosely inspired on a dress featured in an Yves Saint Laurent advertisement. Take a look at some of the mentioned original dresses in the tweets below:

The Christian Dior exhibit at the Dallas Museum of Art will run through October 27th.