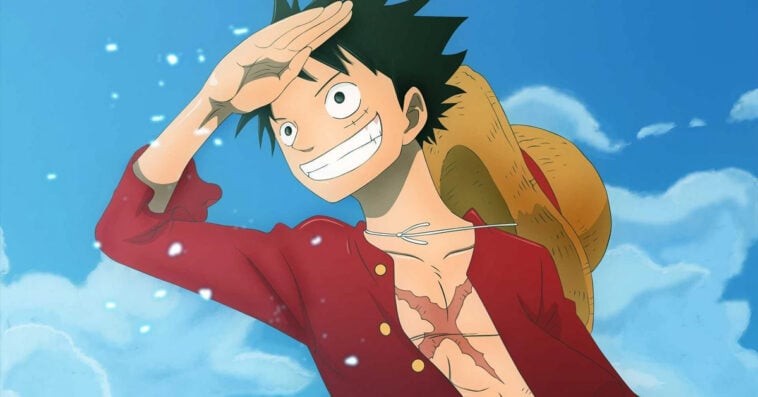 One Piece has revealed the first rough sketches for the Luffy Gear 5 transformation in the fourth and final volume of the booklet series, Road to Laugh Tale.

Twitter user New World Arthur shared a photo from the volume’s Concept Gallery Treasures section showing the early sketches of One Piece creator Eiichiro Oda for what would become Luffy Gear 5 in the manga.

Like other rough One Piece drafts featured in the past volumes of Road to Laugh, the concept art for Luffy Gear 5 is quite different from the final form that appeared in the manga. However, it is clear in Oda’s early sketches that he had the cartoonish new form of Luffy ready to go before the transformation finally arrived at the climax of the Raid on Onigashima.

Luffy Gear 5 is the character’s most powerful transformation to date. It is a result of Monkey D. Luffy awakening his Monkey’s Gum-Gum Fruit (Gomu Gomu no Mi) for the first time since the Void Century. With Gear 5, Luffy doesn’t make use of his basic Devil Fruit abilities at all. Gear 5 is actually based on the true nature of Luffy’s Devil Fruit, whose real name is the Hito Hito no Mi, Model: Nika.

When is Luffy Gear 5 coming out?

In the manga, the Luffy 5 Gear 5 transformation was first seen in chapter 1044 during the protagonist’s final battle with Kaidou on the Skull Dome rooftop during the Raid on Onigashima.

In the Wano Country arc, Luffy managed to awaken his Devil Fruit after being beaten up by Kaido for the third time. Luffy’s defeat somehow caused his Devil Fruit to finally break through its limits and awaken. And since his Devil Fruit is actually a Mythical Zoan and not a Paramecia, it gave him an entirely new transformation that is far different from Luffy’s typical appearance.

After the transformation, Luffy demonstrated several never-before-seen abilities such as being able to freely manipulate the shape and size of his body. Also, instead of focusing more on hardening himself using Busoshoku Haki, the character took a more cartoonish fighting style after the transformation.

In his fight against Kaido, Luffy was able to change the ground beneath his feet into a rubber-like property that allowed him to deflect a Bolo Breath by bouncing it back at Kaidou. Luffy’s Gear 5 transformation also gave him the power to stretch objects as if they were made of rubber. These include lightning bolts as well as living things.

When is Luffy Gear 5 getting animated?

While Luffy Gear 5 had already debuted in the manga, the transformation is yet to appear in the anime series. But based on where the anime adaptation is currently at, it looks like viewers are going to witness it very soon.

It’s worth noting, however, that Luffy Gear 5 already made its animated debut as an easter egg during the climax of One Piece Film: Red, which opened in Japanese theaters in August 2022.

In Gear 5 form, Luffy’s hair and clothes turn white except for his signature straw hat, belt, and sandals. His eyes glow with red ring-like pupils and his eyebrows become swirled and billowing, similar to Kaidou’s in his dragon and hybrid forms. Luffy’s neck is also surrounded by floating clouds, which are reminiscent to the clouds of steam that accompany him when he’s in his Gear 4 form.

In line with the Mythical Zoan nature of Luffy Gear 5, the hero’s already rubbery body gains strength, freedom, and durability that exceeds what he would receive from his previous forms to the point that it is now even cartoonishly malleable. Kaidou even likens the Gear 5 look to “something out of a picture book”

In an interview with the Weekly Shonen Jump, Oda revealed that the look for Luffy Gear 5 was inspired by rubber hose animation and various cartoon effects from the animated series Tom and Jerry. Although Oda was well aware that the general audience of One Piece wouldn’t like this concept, he still pursued his idea, as he wanted Luffy’s fights to have some funny elements that would balance Kaidou’s deadly seriousness.

Below are some of the techniques that Luffy can do when he’s in his Gear 5 form:

Gum-Gum Balloon: This is a version of Luffy’s standard technique. But unlike the original, Gear 5’s Gum-Gum Balloon allows Luffy’s body to become extremely buoyant, like a helium balloon. Luffy first used this technique against Kaidou in his dragon form, where the former entered the Emperor’s body and expanded himself as well as the dragon.

Gum-Gum Giant: This is a technique where Luffy expands himself to the size of a literal giant, as if activating Gear 3 on his entire body.

Gum-Gum Bajrang Gun: This is the Gear 5 version of Rubber Rubber Supreme Monkey King Gun, where inflates his fist almost to the size of Onigashima, infusing it with Busoshoku and Haoshoku Haki; then unleashes it at his opponent with the intention of punching them without making direct contact, through emitting Haki outward, for a devastating blow.

The destined Pirate King first used this technique against Kaidou, who countered the attack with Shoryu: Kaen Hakke, resulting in a massive clash. But Luffy’s Gum-Gum Bajrang Gun eventually overpowered Kaidou’s technique and broke off one of the villain’s horns, ultimately defeating and sending him crashing into the ground.

Gum-Gum Escape Rocket: This is the technique that Luffy used to escape from inside Kaidou’s body after using Gum-Gum Balloon. To perform the technique, Luffy stretched his arms through his opponent’s eyes and grabbed onto their nose to launch himself out.

Gum-Gum Jump Rope: While in his enormous size, Luffy achieved this technique by grabbing Kaidou in his dragon form and using the antagonist’s serpentine body as a skipping rope.

Gum-Gum Lightning: In this technique, Luffy gives a lightning bolt the properties of rubber in order to grab it, then hurls it at his opponent. Luffy first used it against Kaidou, who managed to dodge the attack.

Is there Luffy Gear 6?

In the new Egghead Island Arc of One Piece, Luffy will likely meet Vegapunk, the person who understands Devil Fruits more than anyone in the world. And according to Sportskeeda, some fans speculate that the scientist could help Luffy master his Devil Fruit powers, eventually creating a new form that will be called Gear 6.

What is Road to Laugh Tale?

Road To Laugh Tale is a booklet series published with Shonen Jump issues earlier this year during the month-long hiatus of One Piece between chapters 1053 and 1054. It contains Oda’s previously unseen rough sketches and storyboards that did not make it into the final work.

Where to watch One Piece

One Piece is streaming on Pluto TV, Netflix, Hoopla, VRV, Funimation Now, Crunchyroll, and Hulu in the United States. Episodes of the anime series are also available to purchase on Amazon.