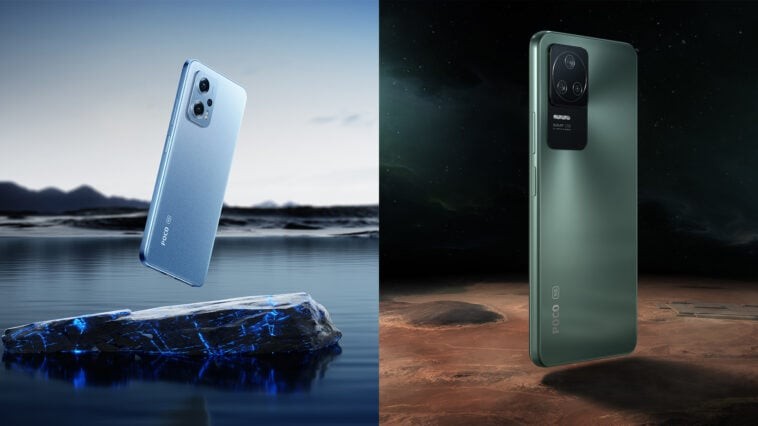 POCO recently unveiled the POCO F4 5G and POCO X4 GT — two mid-range smartphones that belong to the company’s affordable flagship lineup. According to POCO, both phones offer powerful performance without burning a hole in your pocket.

The POCO F4 5G is powered by the Snapdragon 870 5G chipset just like the POCO F3. This means that the device’s CPU also has a prime core that runs at 3.2 GHz, has improved UI responsiveness, and supports heavy gaming thanks to the Adreno 650 GPU.

Also making a comeback is Xiaomi’s Loop LiquidCool Tech which Xiaomi claims will double the cooling efficiency of vapor chambers. But this time, the technology has received an upgrade (Liquidcool 2.0 cooling system).

The POCO F4 5G is equipped with up to 12 GB of LPDDR5 RAM and UFS 3.1 ROM that will allow users to access data faster and switch between multiple apps without a hitch.

The POCO F4 features a 6.67-inch, E4 AMOLED screen, has a 120Hz refresh rate combined with a 360Hz touch sampling rate, and a peak brightness of 1,300 nits. With respect to audio, the smartphone uses dual speakers that have been verified by Dolby Atmos.

Perhaps the biggest difference between the POCO F4 and F3 is their camera. According to POCO, the F4 “features the first-ever addition of optical image stabilization” thereby delivering better quality default images even in low-light environments.

The X4 GT is powered by MediaTek’s Dimensity 8100 chipset. Needless to say, the chipset is quite power-efficient.

The X4 GT is also equipped with the LPDDR5 RAM and UFS 3.1 ROM and comes with the LiquidCool Technology 2.0 just as in the POCO F4.

The POCO X4 GT’s 6.6-inch FHD LCD screen offers an off-standard 20.5:9 aspect ratio, which according to Xiaomi will provide users with the right combination of hand comfort and viewability. To compensate for the older display technology used, the X4 GT features a higher DCI-P3 color gamut setting.

The battery capacity of the X4 is 5000mAh. The device comes with 67W turbo charging.

Both devices will not be available in the U.S.