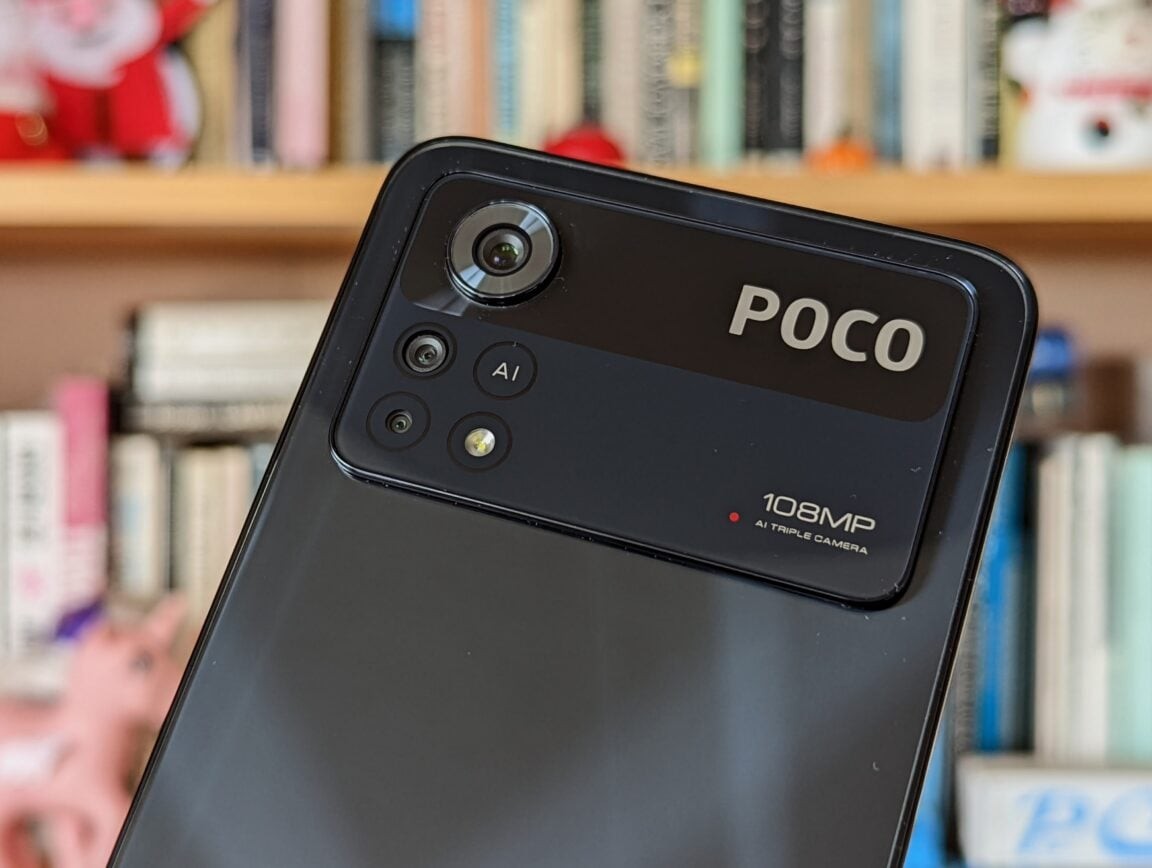 In the land of Xiaomi smartphones you have four brands to choose from: Xiaomi (formerly Mi), Redmi, Poco, and CC. Globally, Xiaomi is best known for its flagships and higher-end models, while Redmi and Poco dominate the budget and mid-range, and CC is reserved for the Chinese market. Over the years, Xiaomi’s mastered the art of parts binning – mixing and matching various specs into similar handsets at different price points.

Case in point: the Poco X4 Pro 5G is an affordable ($300) mid-range phone that Xiaomi launched at Mobile World Congress back in February, and – camera pod design aside – it’s identical to Redmi’s Note 11 Pro 5G. Spec-wise, both are similar to OnePlus’ excellent Nord N20 5G ($282) recently launched on T-Mobile in the US. I’ve been using the Poco X4 Pro 5G on and off for the past three months, and here’s my Poco X4 Pro review.

Like several other mid-range handsets launched by Chinese manufacturers this year, the Poco X4 Pro 5G adopts an iPhone 13-like slab-sided design, but with a frame made of plastic instead of metal. The back is glass, and features Poco’s signature oversize camera pod and logo – originally introduced with the Poco M3 – which hosts a trio of shooters (108 / 8 / 2MP) and an LED flash. It’s complete overkill, but it’s different.

On the right side, you’ll find the volume rocker and power / lock key, which doubles as a capacitive fingerprint sensor. The bottom edge is home to one of the two speakers, the primary mic, USB Type-C port, and SIM / microSD tray. Continuing along the perimeter, there’s nothing on the left side. The second speaker, IR transmitter, secondary mic, and headphone jack are all located along the top edge. 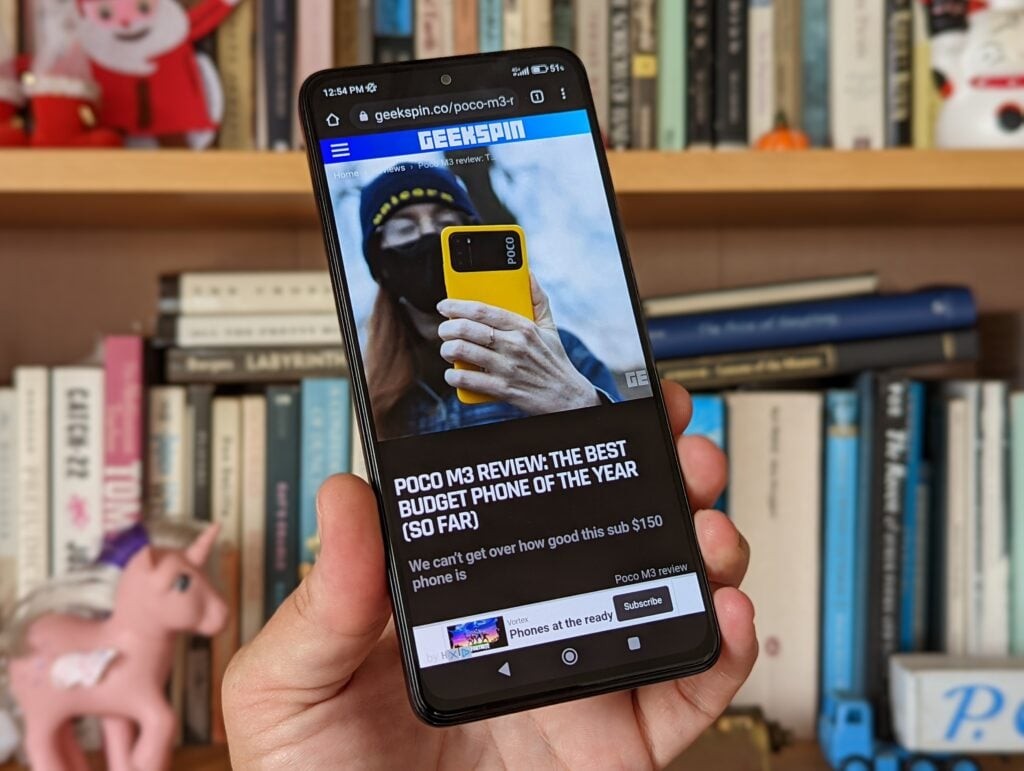 In front, the Poco X4 Pro 5G boasts a 6.67-inch AMOLED display with minimal bezels, a small chin, and a center punch hole with a silver ring surrounding the 16MP selfie camera. This phone comes in three colors – Laser Black (like my review unit), Laser Blue, and Poco Yellow (my favorite) – and is rated IP53 dust and splash resistant. 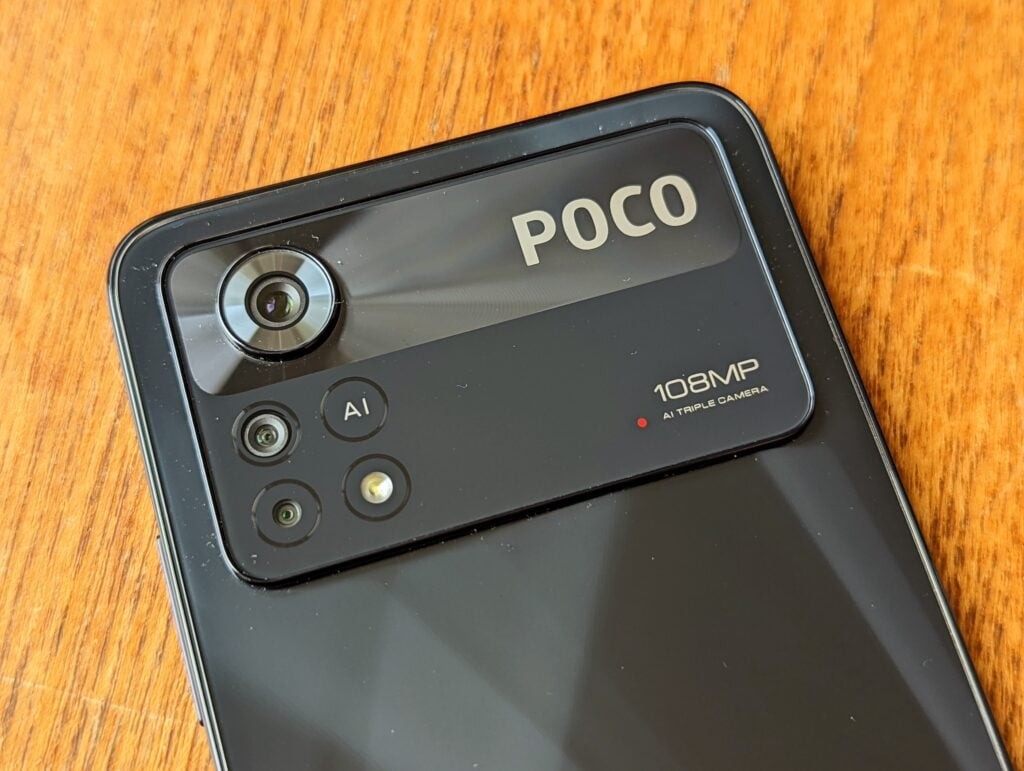 Unfortunately, the photos I took with the Poco X4 Pro 5G aren’t quite as nice as those I shot with the Redmi Note 10 Pro. Now don’t get me wrong: pictures captured with the main shooter are fine overall, with accurate exposure and colors, and plenty of detail. Low-light performance is pretty decent considering there’s no OIS – thanks in great part to pixel binning, which combines groups of 9 pixels into one for 12MP images.

But zooming in beyond 2-3x results in more color banding and less sharpness than I expected from such a high-resolution camera. I’m not sure if this is caused by the software (a different algorithm) or the hardware (a chip limitation), but it’s slightly disappointing. The macro’s lower resolution and lack of autofocus are another letdown. Basically, you’re better off zooming in 2x with the main shooter than using the macro.

Xiaomi’s camera app remains intuitive and pleasant to use, but the Poco X4 Pro 5G is also missing some important features. For example, night mode isn’t available on the ultrawide or front cameras, portrait selfies don’t support HDR, and video recording maxes out at a paltry 1080p 30fps (720p 30fps for macro video and slow-motion). On the plus side, videos are stabilized and captured with stereo audio.

I tested the Poco X4 Pro 5G mostly on T-Mobile and AT&T’s 4G LTE networks in and around San Francisco, and didn’t run into any problems with call quality or data speeds. While this is a sub-6GHz 5G-capable phone, it doesn’t support 5G bands in the US. As such, you’ll be stuck on 4G LTE if you import this handset. It also doesn’t work on Verizon’s network at all, and is missing LTE band 71 for T-Mobile (600MHz). 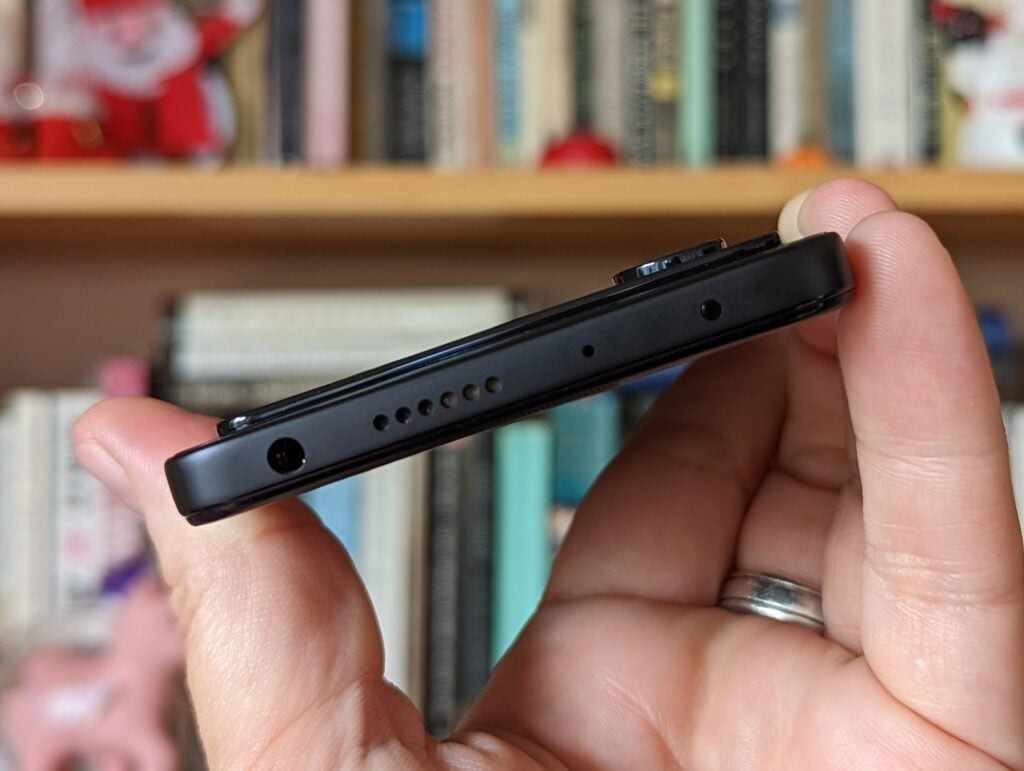 On the audio front, the Poco X4 Pro 5G delivers. Not only does it pack great stereo speakers that sound loud and clear, but it also includes a headphone jack with a quality DAC and headphone amp, so you can use your favorite wired pro-grade headphones or IEMs (in-ear monitors). And if you prefer to go wireless, this phone supports LDAC and aptX HD for lossless audio over Bluetooth.

With a Snapdragon 695 5G under the hood, the Poco X4 Pro 5G won’t set any performance records. But that’s not what this handset is about. Qualcomm’s chip provides enough oomph to be productive – and even play the occasional game – without skipping a beat. It’s paired with 6 or 8GB of RAM and 128 or 256GB of storage here (depending on model) and supports microSD cards for additional storage. 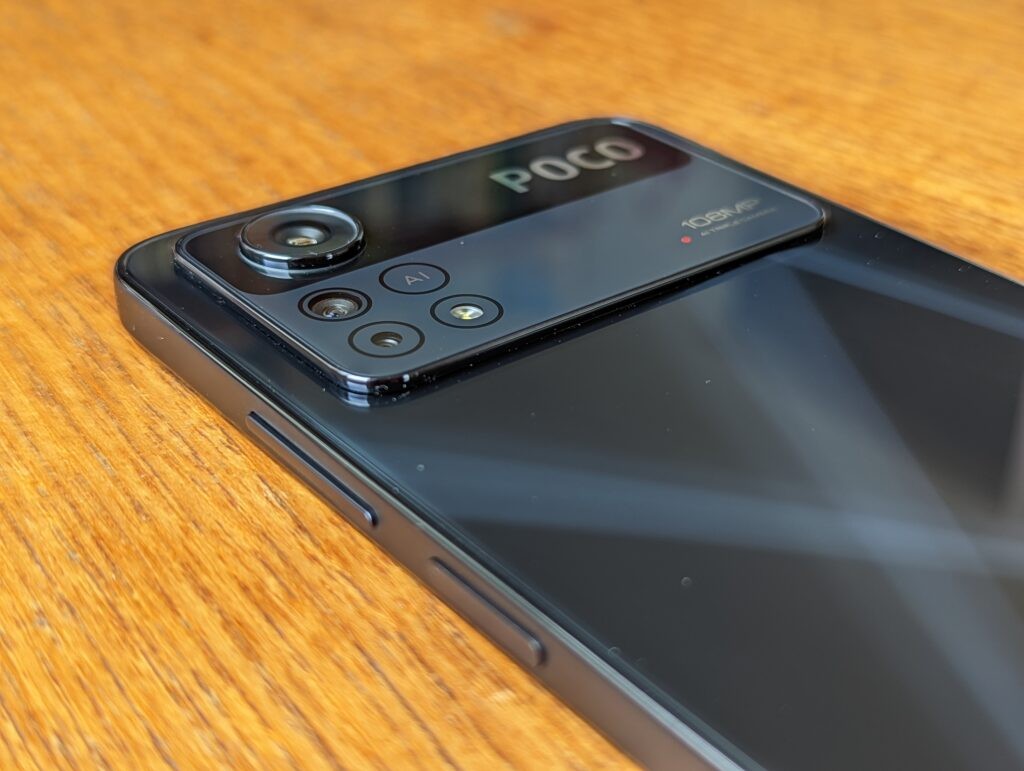 Battery life is definitely one of the Poco X4 Pro’s strengths. The 5000mAh cell easily delivers two days of regular use on a single charge – even with the display set to 120Hz. When it’s time for a refill, this phone supports 67W fast charging, and comes with a 67W charger in the box. As you’d expect, there’s no wireless charging here.

The Poco X4 Pro 5G runs MIUI 13 on top of Android 11. Generally speaking, MIUI is reasonably simple and intuitive, but I find it too heavy-handed and too far removed from stock Android. On the plus side, it includes Google’s Discover feed left of the home screen, and allows notifications to be dismissed by swiping either left or right. Unfortunately, recent apps can only be closed by swiping sideways with Poco’s launcher, which is unfamiliar. 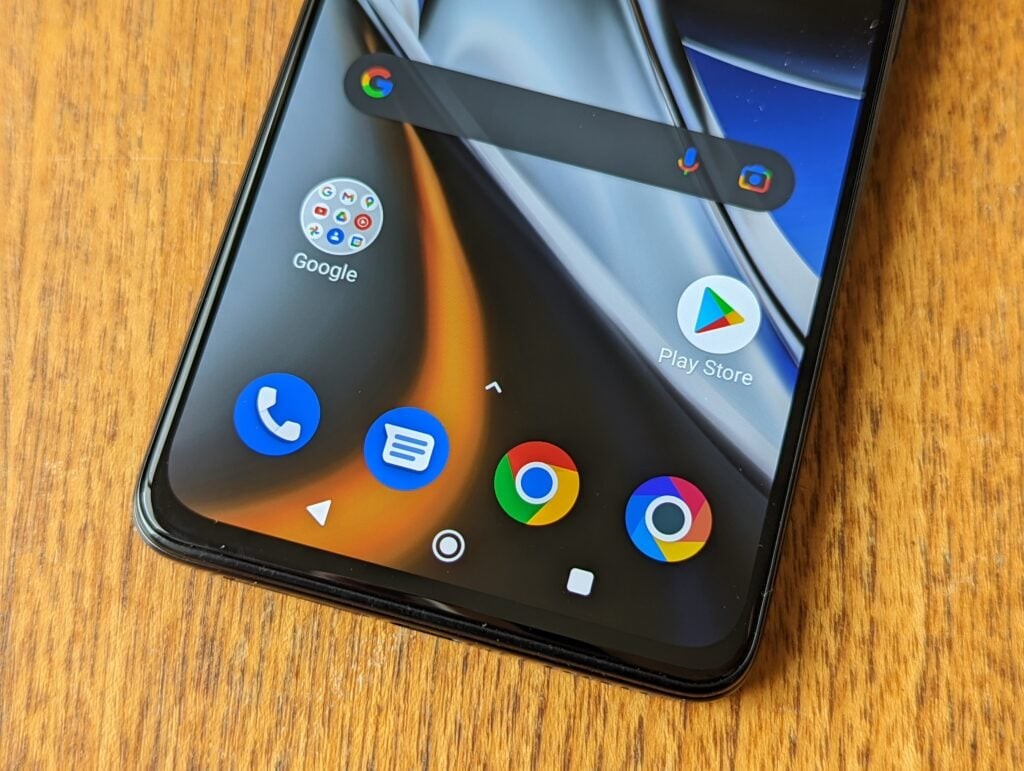 MIUI is still trying too hard to mimic iOS. By default, you have to swipe down from the top left side of the display for notifications and swipe down from the top right side of the screen for quick settings. The app drawer is also disabled out of the box. Obviously, you can change this behavior in the settings, but first you’ll have to find the relevant options in the settings menu, which is significantly reworked, and difficult to navigate.

Also, if you plan to keep this handset for more than a year, be mindful that Xiaomi’s track record for OS upgrades and timely security updates is pretty spotty. Finally, while the Poco X4 Pro 5G comes with some bloatware pre-installed – like AliExpress, Amazon Shopping, LinkedIn, Netflix, WPS Office, and a handful of games — all of it is easy to uninstall.

Is the Poco X4 Pro a good phone?

For a little over $300, the Poco X4 Pro 5G certainly brings a lot of value to the table. It features a unique design, a gorgeous display, fantastic speakers, decent performance, and solid battery life. But it’s not perfect. I’m a little disappointed with camera performance and with MIUI, which seems to be getting more bloated every year. Honestly, it’s a bit too customized for my tastes. But of course, your mileage will vary.

Just remember that if you live in the US and import the Poco X4 Pro 5G, you won’t be getting any kind of 5G or Verizon support. As such, you might want to consider buying the $282 OnePlus Nord N20 5G instead. It’s exclusive to T-Mobile for now, but it’s pretty similar in terms of specs, and while it lacks an ultrawide shooter and that sweet 120Hz refresh rate, it delivers a much nicer user experience. The Poco X4 Pro delivers solid value for under $350. It's a great affordable mid-range smartphone.