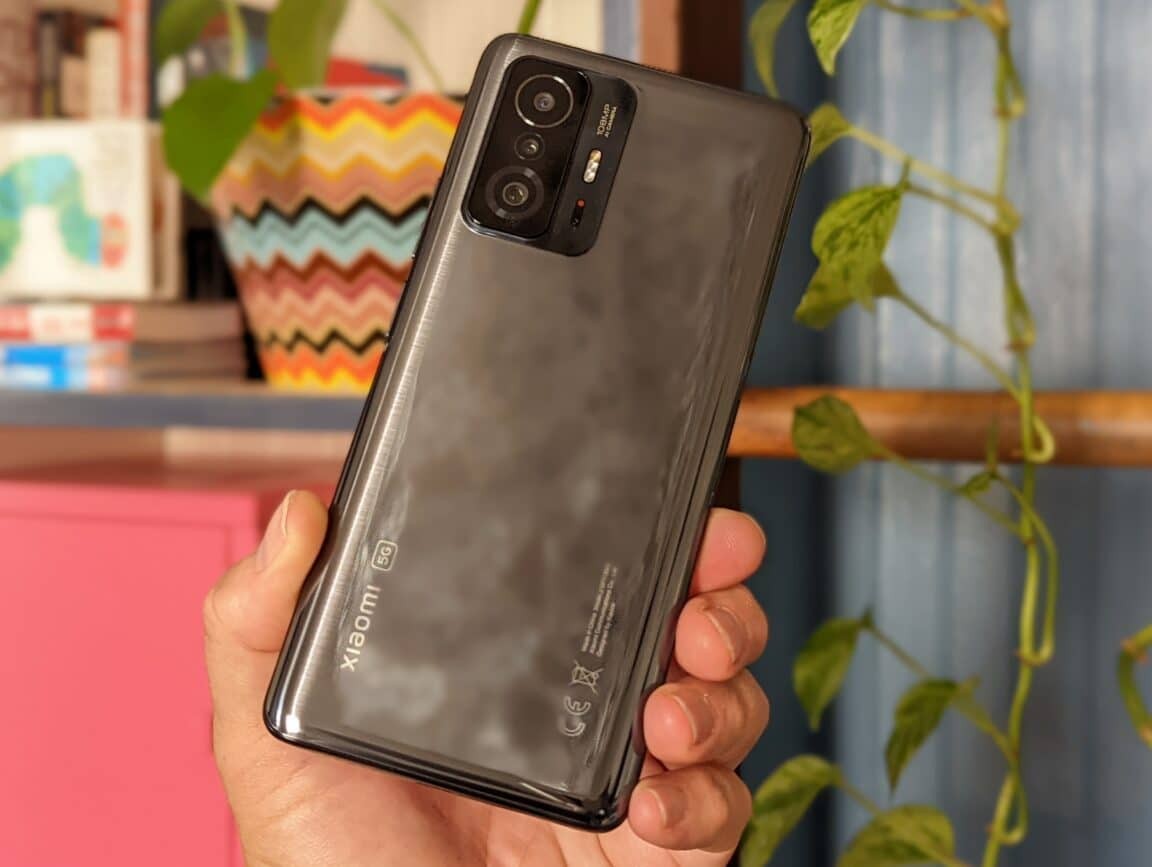 Between its own brand (formerly Mi) and its sub-brands (Redmi, Poco, and CC) Xiaomi makes a ton of phones every year. While it’s hard to keep up, some things remain the same. Xiaomi always launches two main lines of handsets each year: the regular models (winter) and the T models (fall). Helena reviewed the Xiaomi Mi 11 flagship ($699) back in March, and found it to be a cheaper, better alternative to Samsung’s Galaxy S21+.

This brings me to the Xiaomi 11T Pro ($669), the new flagship from the T line. Xiaomi’s dropping the Mi name going forward, but otherwise, the T models continue to be slightly more affordable, with slightly lower specs. So, how different is the 11T Pro from the Mi 11? What compromises does this Xiaomi phone make, if any? Is it worth the minor $30 saving? I just spent a month using the Xiaomi 11T Pro, and here’s my review.

Design-wise, the Xiaomi 11T Pro is a blend of several Redmi and Poco handsets released earlier this year. In other words, it looks unmistakably Xiaomi, but doesn’t really stand out. A lot of this comes down to the multi-tiered rectangular camera bump, which — other than missing the silver accent around the main shooter — is almost identical to the camera pod on the Redmi Note 10 Pro I reviewed last spring.

In fact, the 11T Pro’s cameras are nearly identical as well (108MP main, 8MP ultrawide, 5MP macro, but no 2MP depth sensor). Even the front resembles the Note 10 Pro. Both pack a 6.67-inch 120Hz AMOLED display with a center punch hole and the same 16MP selfie shooter, The 11T Pro’s display has smaller bezels, and a tighter radius in the screen corners, but that’s only a minor cosmetic difference. 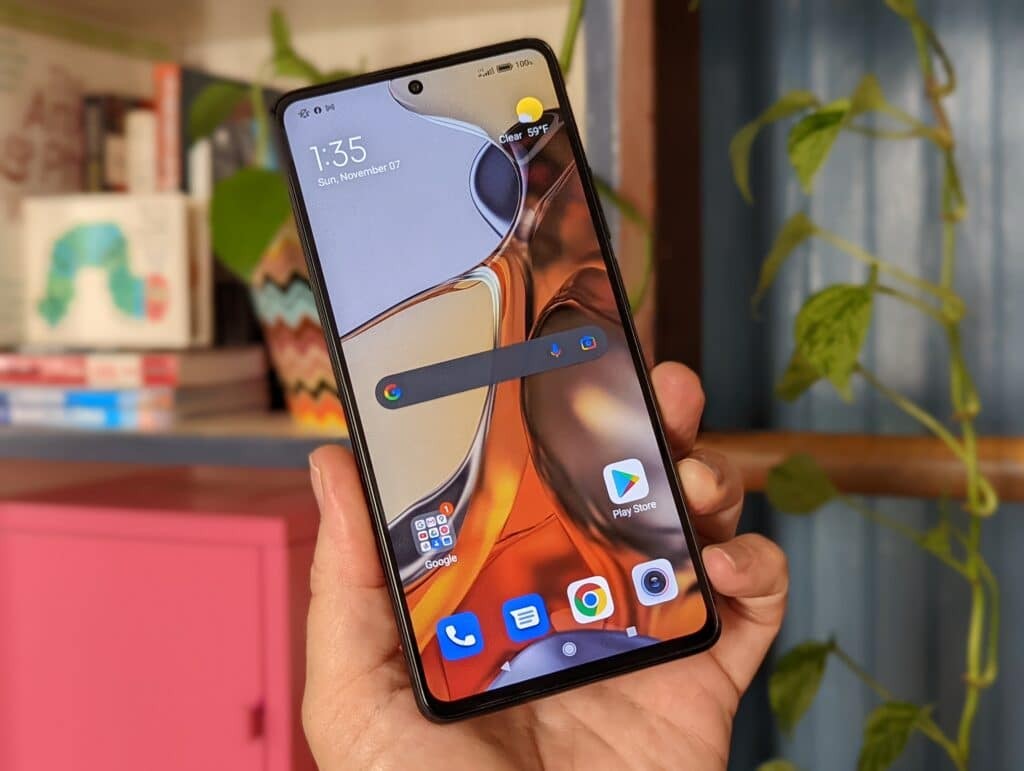 My 11T Pro’s Meteorite Gray review unit almost exactly matches the Note 10 Pro’s Onyx Gray colorway. Ditto the materials, which consist of a plastic frame and glass back on both phones. As such, the 11T Pro looks and feels more like an affordable mid-range handset. In contrast, the Xiaomi Mi 11 boasts a distinctly unique camera bump and a proper aluminum frame, making it look and feel significantly more premium — like a flagship.

Walking around the edges, you’ll find a volume rocker and power/lock key (which doubles as the fingerprint sensor) on the right side, plus a speaker, USB Type-C port, primary mic, and SIM tray along the bottom. There’s another speaker, secondary mic, and IR transmitter on top, but nothing on the left side. While the 11T Pro lacks official water and dust resistance rating, it’ll probably be fine as long as you don’t immerse it. 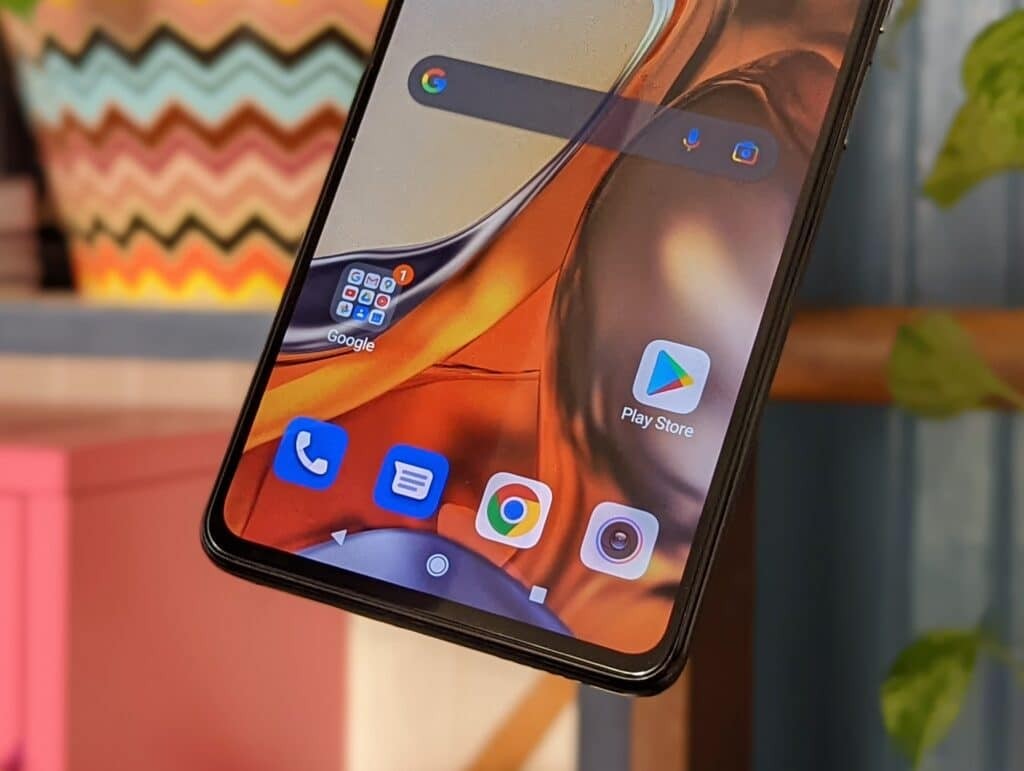 While I’m happy with the 11T Pro’s display, it’s worth noting that despite having curved edges, the Xiaomi Mi 11 technically offers a better LTPO AMOLED screen  — with a higher QHD+ resolution and an adaptive 120Hz refresh rate — for only $30 more.

The 11T Pro drops the Note 10 Pro’s additional 2MP depth sensor, which isn’t important. But it also lacks OIS, which is critical — especially on a flagship. It’s something the Xiaomi Mi 11 includes for just $30 more, and it makes a big difference in low light. On the plus side, the 11T Pro’s main shooter bins (combines) groups of 9 pixels into larger 2.1-micron pixels for better low-light performance, resulting in 12MP images.

Shooting modes are pretty standard, and include portrait, night (main, ultrawide, selfie), pro (main, ultrawide, and macro), panorama, 108MP, and document. For video, there’s slow motion (up to 960fps at 1080p), time lapse (up to 4k 30fps), pro, and short video. Xiaomi’s familiar (and fun) modes are also on the menu — like long exposure, VLOG, movie effects, dual video, and clone. It’s nice to have this many options.

The good news is that the 11T Pro takes lovely pictures — especially with that 108MP main shooter. Photos are detailed, with accurate colors and exposure, and plenty of dynamic range. Low-light performance is solid despite the lack of OIS, but night mode processing can sometimes be a little heavy handed. Zooming is acceptable up to 3-4x, but anything beyond that starts to exhibit color banding and reduced sharpness.

Overall, the ultrawide and selfie cameras don’t quite deliver the same quality shots as the main shooter, but the macro is pretty usable — thanks to autofocus. My only niggle with the selfie camera — besides the absence of 4k video recording — is the lack of HDR support in portrait mode. This seems odd considering the Mi 11 includes this functionality, and shares the same Snapdragon 888 chip.

I tested the Xiaomi 11T Pro primarily on AT&T’s and T-Mobile’s 4G LTE network in San Francisco, Portland (OR), Phoenix, and Los Angeles, and didn’t encounter any issues with call quality or data speeds. While this is an unlocked sub-6GHz 5G-capable phone, it lacks proper US 5G band support — even though it sometimes displays the 5G icon. Like many other imported phones, it also doesn’t work on Verizon’s network. So keep this in mind. 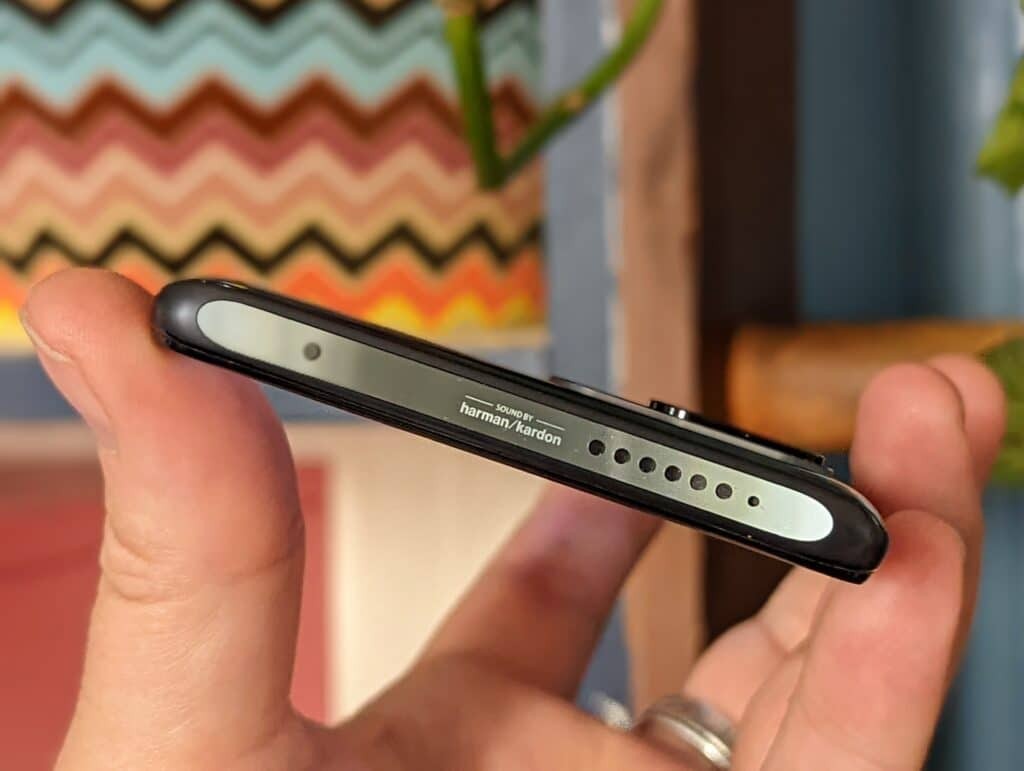 Audio is one area where the 11T Pro matches the Xiaomi Mi 11, and certainly shines. The 11T Pro’s stereo speakers — tuned by Harman Kardon — sound absolutely fantastic, and feature Dolby Atmos. While it lacks a headphone jack, the 11T Pro supports both analog and digital audio devices over USB Type-C, with a quality DAC and headphone amp to boot. It also includes LDAC and aptX HD codecs for lossless audio via Bluetooth.

With Qualcomm’s flagship Snapdragon 888 SoC under the hood, the Xiaomi 11T Pro feels pleasantly quick. It’s paired with 8 or 12 GB of RAM and 128 or 256 GB of storage, but there’s no microSD support. It ran my usual set of productivity and entertainment apps without breaking a sweat, but it’s also perfectly suited for gaming — if that’s what floats your boat. Basically, performance is top-notch, no matter what you do. 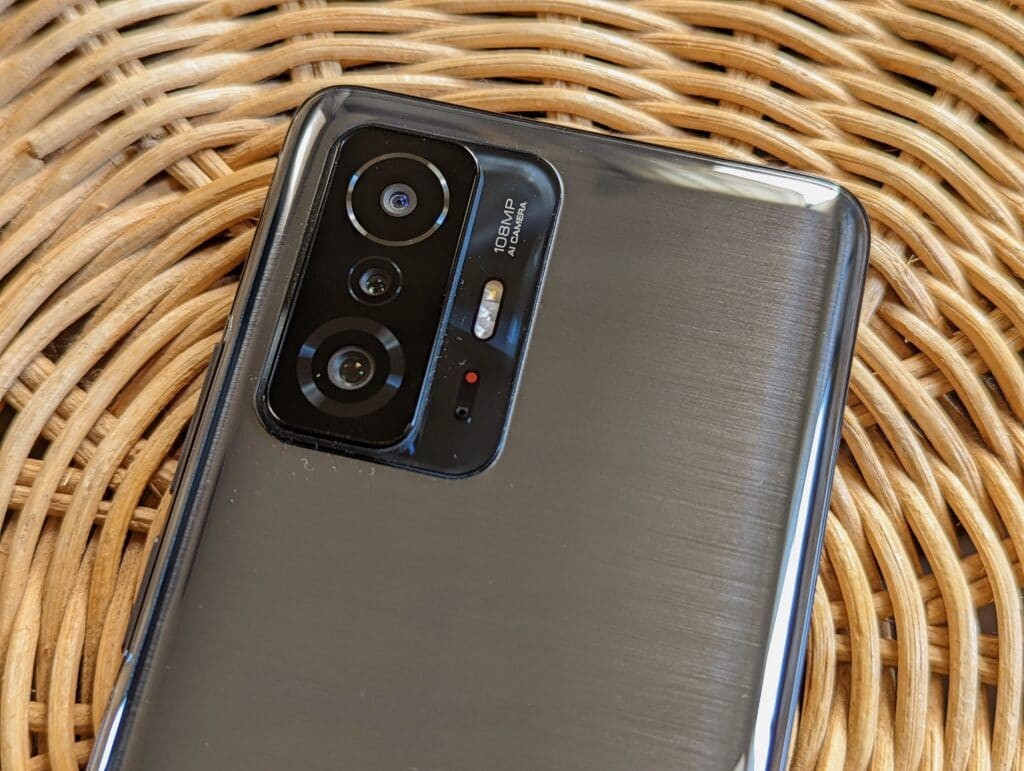 The remaining specs are pretty much what you’d expect for a flagship in 2021, and include sub-6GHz 5G, CAT 18 LTE, dual-band WiFi 6 (802.11ax), Bluetooth 5.2 (LE), NFC, and A-GPS / GLONASS / GALILEO / BDS positioning. Beyond the standard assortment of sensors, the 11T Pro also packs a linear motor for superior haptics. In addition, the capacitive fingerprint sensor mounted in the power/lock key is fast and reliable — ditto face unlock.

Obviously, with its large 5000mAh battery, efficient 1080p AMOLED display, and clean software, the 11T Pro sips power. Battery life is solid, often lasting two days on a full charge. But the 11T Pro’s real party trick is its ability to charge at up to 120W with the supplied charger and cable. That’s 0-100% in a whopping 17 min — yes, seventeen minutes. And while the 11T Pro lacks wireless charging, it also supports PD 3.0 and QuickCharge 3+ wired charging.

The Xiaomi 11T Pro runs MIUI 12.5 on top of Android 11. While Xiaomi’s skin is generally friendly and easy to use, it’s heavily customized and too far removed from stock Android for my tastes. At least Google’s Discover feed is now available left of the home screen, notifications can finally be dismissed by swiping either left or right, and recent apps can be closed by swiping up. This wasn’t always the case in the past. 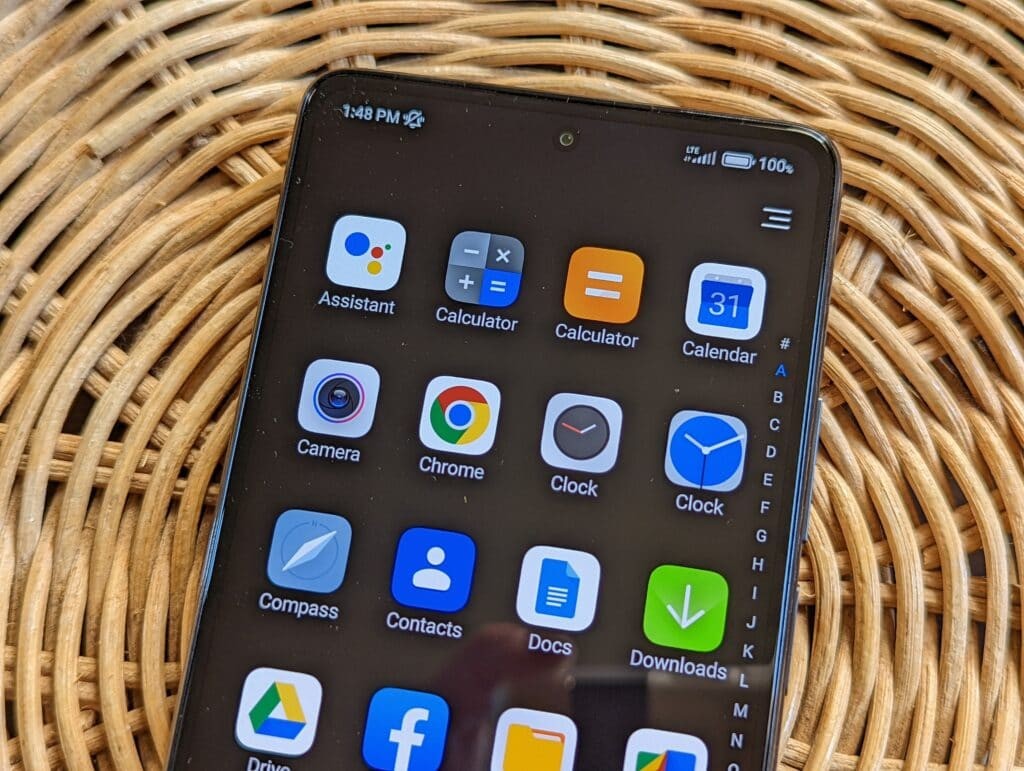 By default, MIUI is still chasing the iOS user experience. Notifications and quick settings require separate swipes down from the top left and right sides of the display, and the app drawer is optional. While this default behavior can be changed, it requires drilling down into various parts of the settings menu after initial setup. And speaking of the settings menu, it’s been significantly altered, making it difficult to navigate.

Finally, Xiaomi’s track record for OS upgrades and timely security updates isn’t stellar, so if you’re planning to keep your phone for more than a year, it’s something to keep in mind. On the plus side, the 11T Pro ships with minimal bloatware. Pre-installed apps include Amazon Shopping, LinkedIn, Netflix, WPS Office, and a bunch of games — all of which can easily be removed.

On its own, the Xiaomi 11T Pro is a pretty nice handset. It boasts a gorgeous screen, a decent camera system, outstanding speakers, solid performance, and excellent battery life — not to mention incredibly quick 120W charging. Unfortunately (and just like the OnePlus 9), it cuts too many corners — plastic frame, no OIS — to deliver a bonafide flagship experience. This is especially true when the Xiaomi Mi 11 is better and costs just $30 more.

If the 11T Pro was priced $100 less, I’d recommend it. But right now if you live abroad, $669 probably buys you a discounted Mi 11, and there are several Snapdragon 888-equipped phones in the $450-550 range — like the Realme GT 5G — that match the 11T Pro in terms of materials and specs. And if you want a good affordable flagship here in the US, look no further than Google’s awesome $599 Pixel 6.

Buy now
If you buy something from a GEEKSPIN link, we may earn a commission