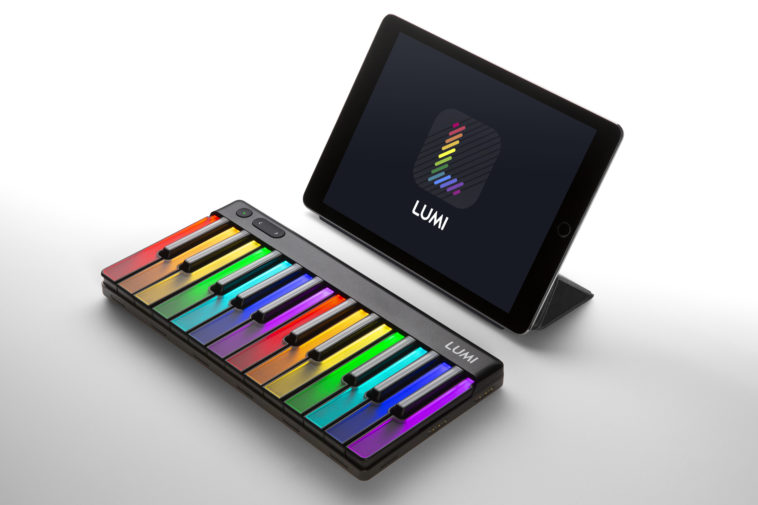 ROLI, the company behind the Seaboard keyboard, has unveiled a Kickstarter for its LUMI keyboard. The LUMI is an illuminated keyboard that is aimed at helping mainstream music streamers learn how to play music without the need for a bulky piano or musical instrument.

The product includes both the keyboard itself, as well as an accompanying interactive app which comes with a curated list of songs that is expected to reach into the hundreds upon release. Users just need to follow the colors in the app and the lights on the keyboard will illuminate.

The company says that the device is one of the first modular keyboards that allows users to connect multiple devices through magnetic seals that are easy to take apart. Roland Lamb, the founder and CEO of ROLI, notes that the company took a structured approach to design the LUMI keyboard and its app, using a variety of data-sets related to music learning to provide an easy to learn experience.

In a statement announcing the device’s Kickstarter, Lamb noted:

“Many people would love to play an instrument but worry that they don’t have the talent. Through our research, design, and innovation at ROLI, we’ve come to believe that the problem is not a lack of talent. Rather, instruments themselves are not smart enough. What excites me most is that the intelligence of LUMI means that there’s something in it for everyone.”

The device also touts six hours of battery life, along with a lightweight and compact design.

The project is being backed by the Sony Innovation Fund, and it’s being endorsed by Pharrell Williams, who is also the company’s Chief Creative Officer.