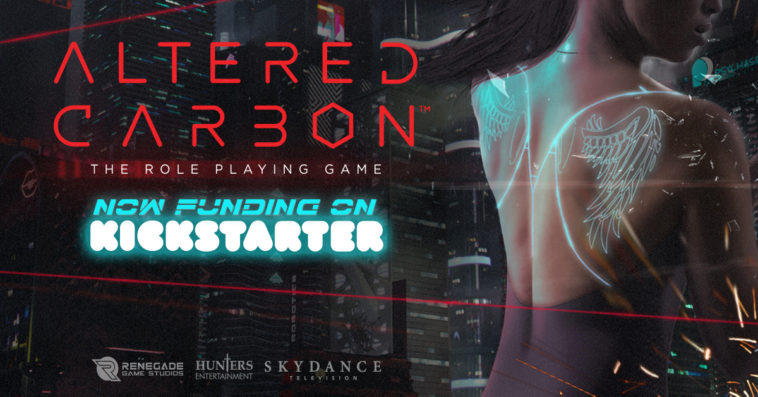 The Kickstarter for Altered Carbon’s official tabletop role-playing game (RPG) has gone live on Monday, and in less than two hours, the campaign successfully surpassed its base goal of $20,000. In fact, as of writing, the campaign has already raised nearly $90,000, hitting not one, not two, but three of its stretch goals.

Created by RPG publisher Hunters Entertainment in collaboration with Skydance Television, Altered Carbon: The Role-Playing Game offers a unique angle on the concept of death in the realm of tabletop RPGs. Inspired by the world of the Netflix series Altered Carbon where people can have their consciousness downloaded into cortical stacks, which can then be transferred between biologically created or artificial bodies called sleeves, this tabletop RPG allows players to transfer the consciousness, memories, and experiences of their characters into new sleeves post-death but at a cost.

Set in Sol (Earth) in the year 2384, Altered Carbon tabletop RPG lets players — with the help of a gamemaster — create their own stories and sleeves in Bay City, the futuristic Californian metropolis that also serves as the main setting of the first season of the Netflix series and Richard K. Morgan’s Altered Carbon novel.

Characters in the tabletop RPG have six primary attributes, four of which are attributed to the character’s cortical stack while the remaining two are related to the sleeves that the characters are wearing. Empathy, willpower, acuity, and intelligence are stack attributes, while strength and perception are both sleeve attributes.

Players accumulate stack points throughout the game, which they can use to upgrade their characters’ stack and sleeve attributes. They can also boost their sleeves with cybernetic enhancements that give them extra abilities or enhance certain stats. Switching out sleeves, meanwhile, allows characters to learn different sets of skills.

Backers who pledged $25 to the Kickstarter will get a PDF copy of Altered Carbon tabletop RPG, while those who pledged $50 will get a hard copy of the game. Higher pledges with added perks are also available. Know more about the game and the different pledges here.

The Kickstarter will remain available through March 4th, with the game set to launch digitally this coming April and physical copies hitting the shelves by July.

Season 2 of Altered Carbon premieres on Netflix on February 27th.