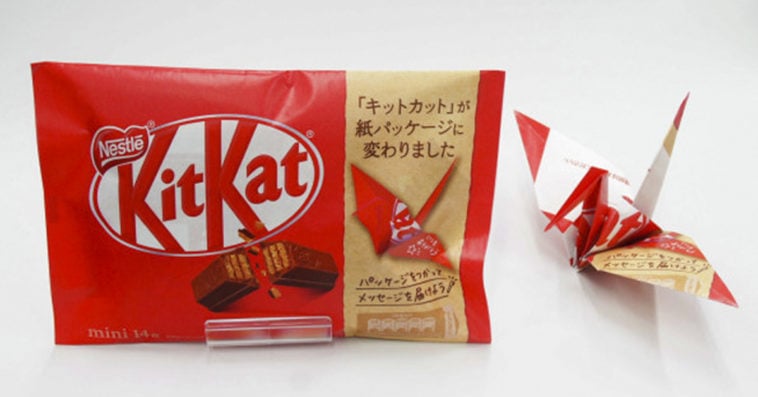 As part of Nestlé’s pledge to issue 100 percent recyclable packaging for its candy products by 2025, Nestlé Japan recently announced its plan to ditch the plastic packaging of its KitKat products and have it replace with paper wrapper that can be folded into pieces of origami.

Traditionally, candy bar packaging is made of plastic film that requires less energy to produce than paper products. The plastic film’s glossy exterior is also utilized to attract consumers, and since the new matte paper wrapper doesn’t have this quality, Nestlé Japan designed the updated packaging to include instructions for how to turn the wrapper itself into the iconic origami crane.

KitKat is ditching plastic packaging for paper you can turn into origami https://t.co/9voq4WVLYE

The new paper packaging will debut later this month with select KitKat Mini flavors donning it first. Nestlé Japan will then release outer bag packaging for normal-sized KitKat multipacks next year, and will roll out single-layer paper wrappers for individual KitKats in 2021.

Since Nestlé is the world’s largest producer of packaged food, replacing KitKat Mini’s plastic packaging with paper wrapper could truly make a real change. For instance, the switch to the environmentally friendly packaging in Japan alone — which happens to be the biggest market for KitKats (4 million are sold every day) — is expected to cut down on roughly 380 tons of plastic each year.

Interestingly, this isn’t the first eco-friendly move Nestlé Japan has made this year. Earlier this summer, Nestlé Japan announced the arrival of a no-sugar-added KitKat this coming fall. The said KitKat variant is sweetened with fruit pulp, making it better for the consumer’s health and the environment.