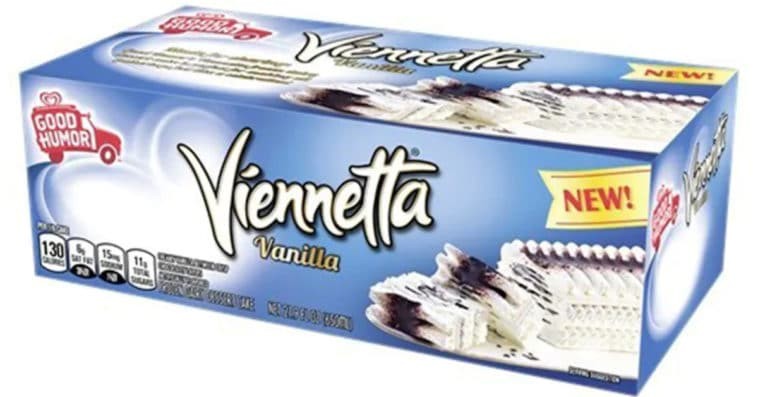 If you’re a ‘90s kid, then you probably remember the fancy dessert called Viennetta ice cream cake. In the United States, the soft vanilla ice cream cake was first made available in the late 1980s but was discontinued in the mid-1990s. After several years of hiatus, the product recently returned to U.S. store shelves, giving American fans a slice of ‘90s nostalgia.

What is Viennetta ice cream cake?

The Viennetta brand was launched by British ice cream company Wall’s in 1982. But at present, its great dessert cake is made by Unilever and sold under the different Heartbrand brands around the world.

The Viennetta cake and its patented production technique were devised by Kevin Hillman, development manager at Wall’s Gloucester factory, along with Ian Butcher and Gordon.

In the original method of creating the dessert, the layers of ice cream were extruded, one after another, onto trays sitting on a moving belt. The rate of extrusion was greater than the speed of the belt which caused festooning or bunching of the ice cream. Each layer was extruded at a different speed from the previous layer, giving a final effect akin to a series of waves rippling through the delicious treat.

When did Viennetta return to the U.S.?

As mentioned above, the ice cream cake was originally brought to the U.S. in the late 1980s under the Breyers brand. More than a couple of decades after it was discontinued in the mid-1990s, the product was reintroduced to the country in 2021 under the Good Humor brand. Both Breyers and Good Humor are owned by the world’s largest ice cream company, Unilever.

“Fans have clamored for Viennetta’s return for almost 30 years, and in 2021, Good Humor grants their wish,” Unilever said in a press release, announcing the product’s comeback to the U.S., which was partly inspired by the consumers’ seemingly endless fascination with ‘90s nostalgia.

News of Viennetta’s 2021 return to the U.S. delighted ice cream cake lovers, especially those that grew up during the ‘90s. Check out some of the fan reactions in the tweets below:

@EITMonline Viennetta was a treat we always had at my aunt's house. She would buy it for us as a birthday treat. I'm 35 and I remember having it almost every birthday when I was young. And yes, it felt like a rich people thing and I loved every second of it.

I cannot wait to have Viennetta in my hands again. That was THE treat to get from the store when I was young. Nothing else was so luxurious or delicious. Somehow memories of it still stick.

I was obsessed with Viennetta when I was younger. The king of frozen desserts. I just remember a bunch of layers of thin chocolate embedded in the ice cream, maybe a mousse layer too? Shudder to think what the ingredient list looks like. I will definitely pick it up again.

For some reason I care more about Viennetta ice cream coming back than the UFO files being released.

Idk but my body is ready #viennetta pic.twitter.com/PXkx7x0rRp

I always wanted one as a kid and never got one and as soon as I see this in stores I AM BUYING ONE. https://t.co/FPz0Nk3UaC

Since the product became a huge hit following its launch throughout KFC and Pizza Hut restaurants during its early years, Unilever has produced additional size variants and more flavors for the whole family, including chocolate, dark chocolate, mint, and pistachio.

But for its U.S. comeback, the ice cream cake is only available in creamy smooth vanilla flavor, at least for the time being. According to the official product description from Good Humor, Vanilla Viennetta “combines a wavy frozen vanilla base between crispy, decadent chocolate layers in a unique cake shape that is perfectly portioned for an entire family to share.”

Great for birthdays, holidays, and other get togethers, Viennetta is available for in-store purchase at retailers across the U.S. and online at several websites, like Instacart. When the very beautiful looking dessert was reintroduced to the country last year, a 650-milliliter ice cream loaf of Viennetta had a suggested retail price of $5.49. To find a store selling Viennetta ice cream cake near you, use Good Humor’s store locator.

Where is Viennetta sold?

Aside from the U.S., Viennetta ice cream cake is also available in the United Kingdom, where it originated. It is also sold in Australia and New Zealand under the Streets brand; in Finland under the Ingman brand, in Italy in all supermarkets by Algida, and in Israel by Strauss, under the name Fantasia.

Other European countries where the Viennetta dessert is sold include Germany, Greece, Austria, and Spain, where it was previously known as Contessa.

In Asia, the sweet treat is sold in Japan by Morinaga & Company. It is also available in the Philippines under the Selecta brand, as well as in Indonesia and Thailand.