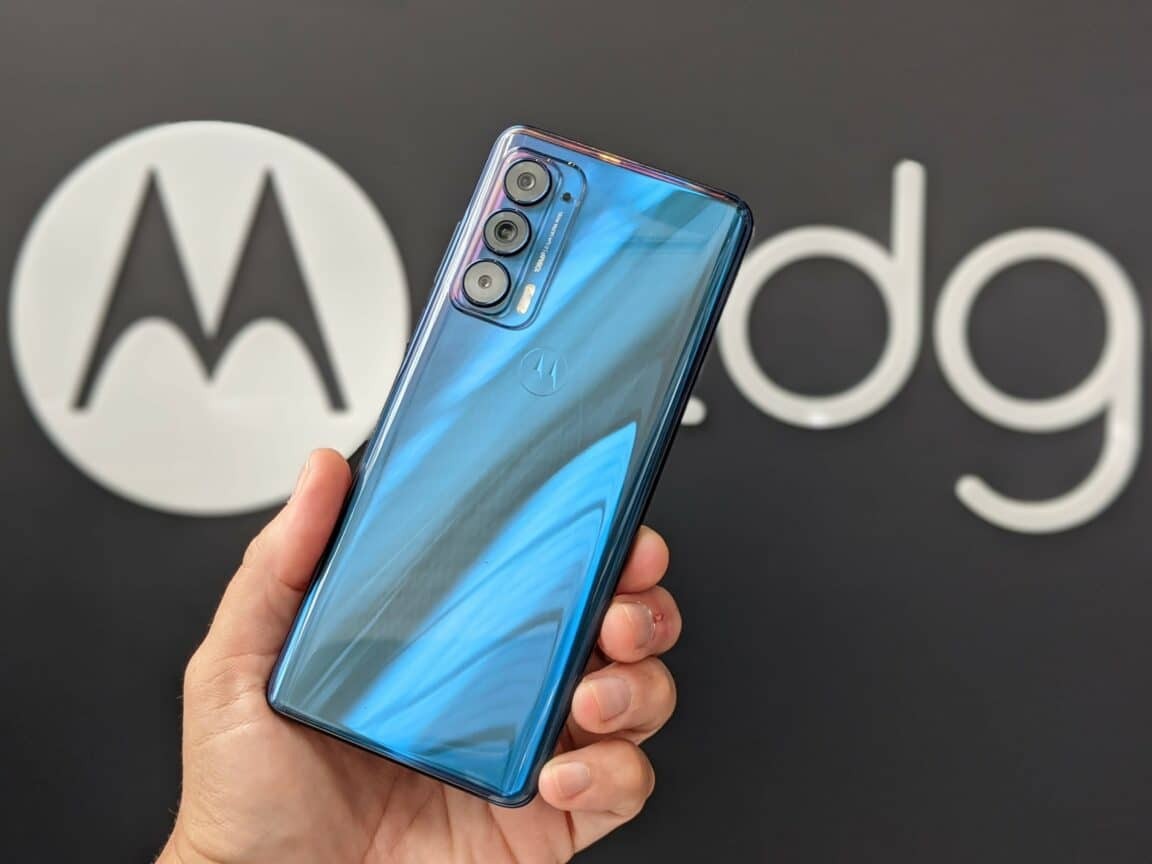 Last year, after a long absence, Motorola finally re-entered the Android flagship space with the $999 Moto Edge+, a no-compromise, glass and aluminum smartphone packed with all the specs. This was followed by the $699 Moto Edge, a slightly detuned (lesser cameras and processor, no wireless charging) variant. Both handsets boasted special OLED screens with extreme curved edges – hence the name.

Fast forward to August, and the 2021 Moto Edge. It’s available unlocked for $699 (but initially $499), and on Verizon as the Moto Edge 5G UW (with mmWave 5G) for $549. But this time around it’s just a plastic mid-range phone with a completely flat 144Hz display. So, what’s the deal with this generic new handset? Is it any good? And if the screen is flat, why is it still called Moto Edge? Read my review to find out.

Brace yourselves. If you expected the 2021 Moto Edge to follow in its predecessor’s footsteps, you’ll be very disappointed. Gone is the premium glass and aluminum build, “waterfall” OLED display, microSD support, headphone jack, stereo speakers, and in-screen fingerprint sensor. Instead, you get a plastic frame and back, completely flat LCD panel, mono speaker, and capacitive fingerprint scanner built into the power / lock key. 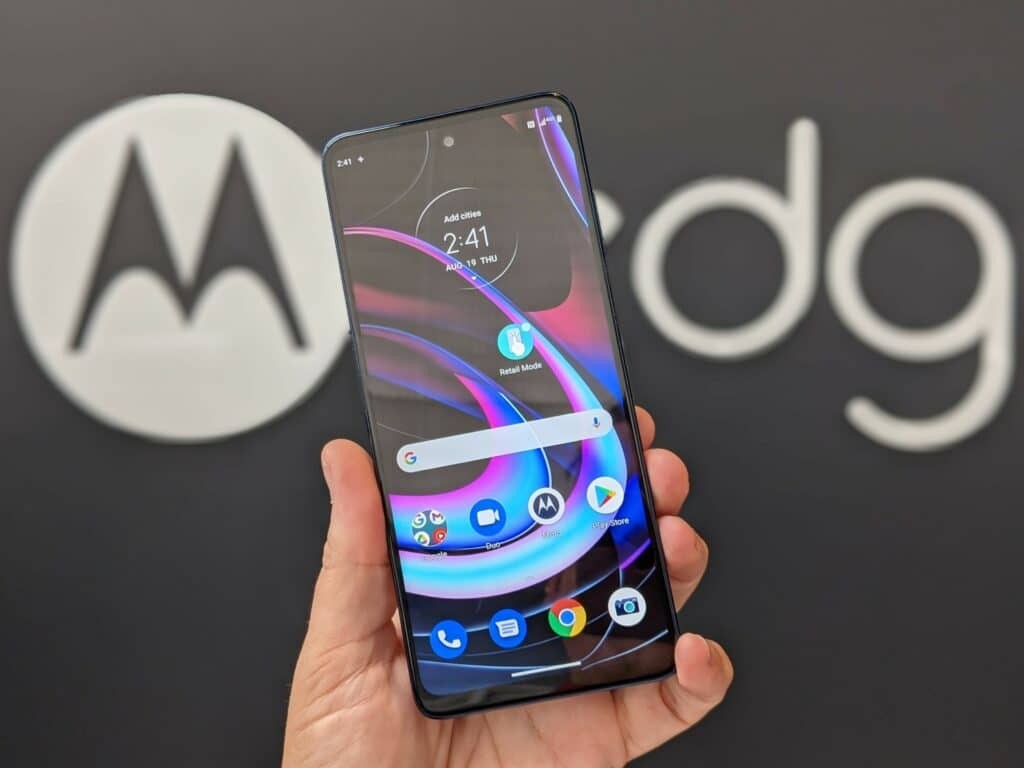 The Moto Edge’s faux-glass back might be shiny and fancy, but it’s a fingerprint magnet, so you’ll probably want to use a case. One standout design feature is the multi-layer camera pod. It’s home to a trio of rear shooters (108MP main, 8MP ultrawide, 2MP depth) with raised lenses mounted on a rectangular platform, itself protruding out of another, larger rectangular platform that contains the dual-LED flash and third mic.

A single colorway is available for the new Moto Edge, and that’s Nebula Blue. It’s lovely. You’ll find the volume rocker and power / lock key (with a capacitive fingerprint sensor) on the right side, a speaker, primary mic, USB Type-C port, and SIM tray along the bottom, and the secondary mic on top. Otherwise, there’s a punch hole for the 32MP selfie camera in front, a Moto logo in the back, but nothing on the left side.

The Moto Edge is rated IP52 for water and dust resistance, so it’s basically splash-proof.

While I prefer flat screens over “waterfall” displays with curved edges, I also much prefer OLED screens over LCDs. As such, I think the Moto Edge’s 6.8-inch FHD+ (2460 x 1080 pixels, 395ppi) HDR10 LCD panel is a step backwards. Yes, the 144Hz refresh rate (vs. 90Hz last year) is an improvement, but you have to manually select it to enjoy the benefits. The auto refresh rate setting maxes out at 120Hz, and is more power efficient. 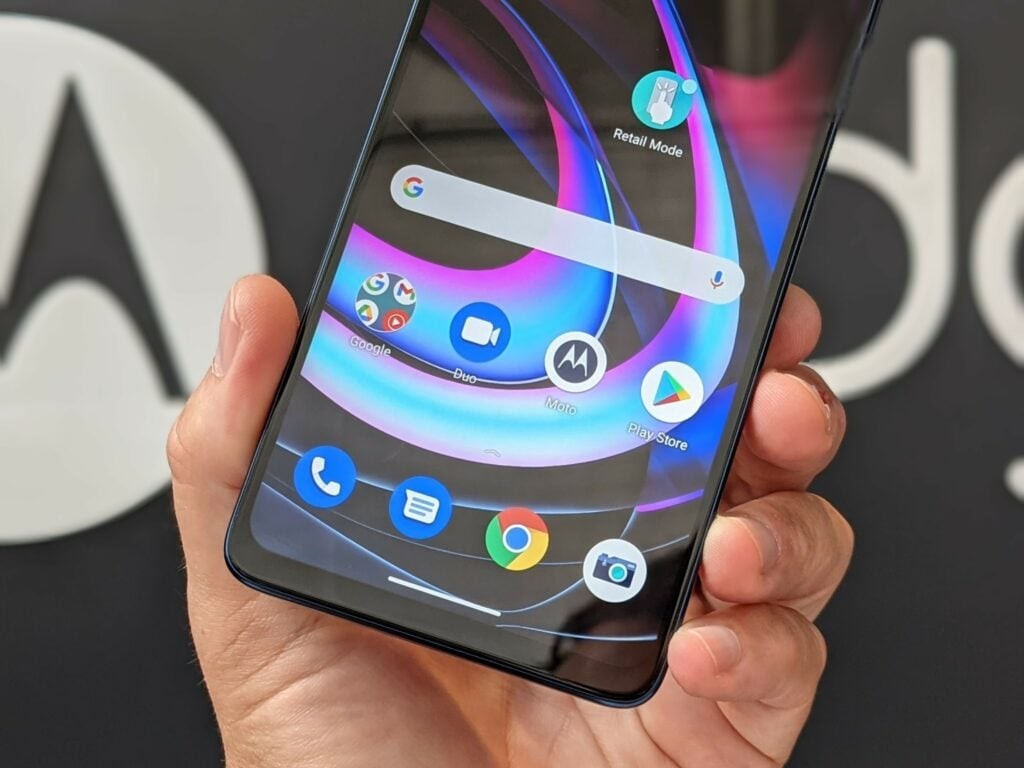 So by default — and for best battery life — this is effectively a 120Hz screen. The other drawback with LCDs is larger bezels and a chin, which is quite pronounced on this 2021 Moto Edge. Overall, this LCD panel is pretty nice, with punchy colors and excellent contrast. Brightness is decent in direct sunlight, but viewing angles aren’t spectacular.

Imaging performance has always been one of Moto’s weaknesses, and while the new Moto Edge still doesn’t match today’s best mid-range shooters, it takes much better pictures than its predecessor. The camera setup is different this year, with a 108MP f/1.9 0.7-micron main shooter with PDAF (but still no OIS), an 8MP f/2.2 1.12-micron 119-degree ultrawide / macro with AF, and a 2MP f/2.4 1.75-micron depth sensor. 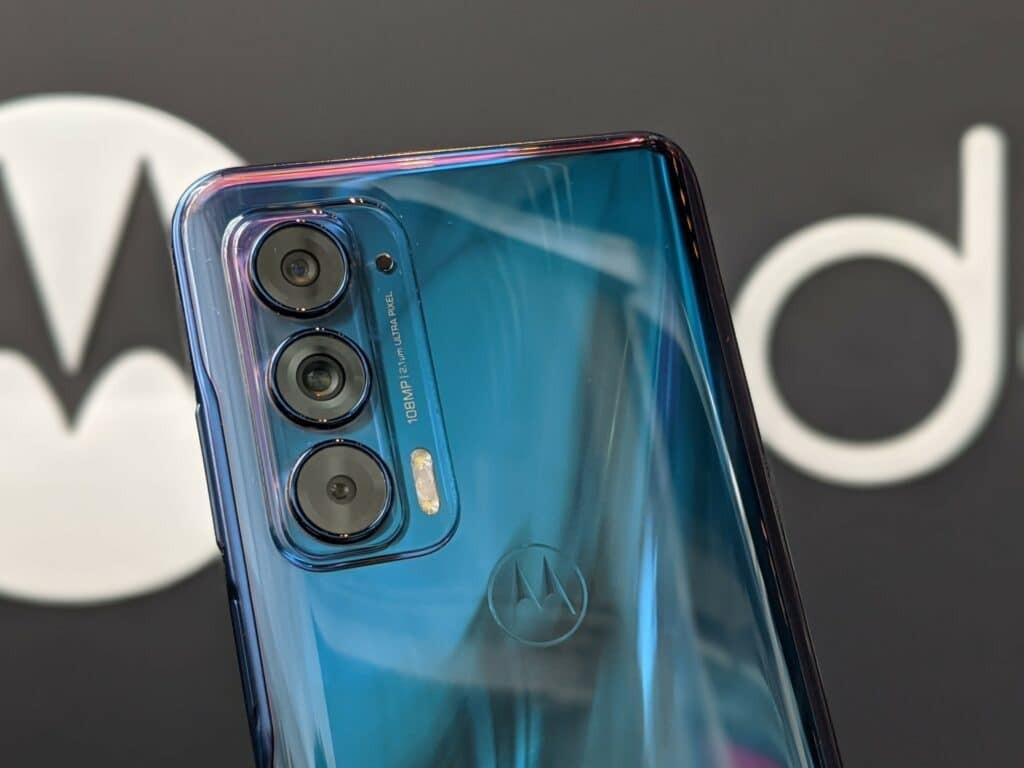 While the main camera is better (108MP vs. 64MP), the ultrawide is worse (8MP vs. 16MP), and the 2x telephoto is gone, making room for a token depth sensor. Losing the 2x telephoto isn’t a big deal given the large size and high resolution of the main shooter. By default, that 108MP main camera bins (combines) groups of nine pixels into larger 2.1-micron pixels for better low-light performance. The resulting images are 12MP.

The Moto Edge includes Moto’s usual set of photo and video shooting modes — like spot color, cinemagraph, dual capture, and more — which are really fun. But it lacks some critical features as well. For example, night mode isn’t available on the ultrawide, and there’s no quick and easy way of selecting 2x and 5x zoom in the camera app. In addition, 4k video recording is limited to 30fps, and the ultrawide only captures video at 1080p 30fps.

On the plus side, macro video recording is available at 1080p 30fps, and slow motion is captured at up to 960fps. Videos are stabilized, with stereo audio, and the Moto Edge features audio zoom. In all, daytime shots are reasonably sharp and well exposed, but colors tend to be muted, and dynamic range is limited. Unfortunately, without OIS, low light images lack detail, and are generally disappointing.

Another issue is shutter lag, which is significant. This is odd, considering the Moto Edge packs a Snapdragon 778G. Hopefully, Moto fixes this with a future software update.  Zooming in works fine up to 4-5x, thanks to that 108MP sensor. While the main shooter takes serviceable pictures, the ultrawide is lackluster overall — and a downgrade from last year. At least it has autofocus, which enables macro photography.

In front, there’s a 32MP f/2.3 0.7-micron shooter that bins (combines) four pixels into one for 8MP shots. The resulting selfies are fine but not spectacular, and HDR is only available in portrait mode, which is strange.

We used the Moto Edge 5G UW on Verizon’s 4G and 5G networks in and around San Francisco, and didn’t experience any problems with call quality and data speeds. Verizon’s mmWave 5G (Ultra-Wideband) network is as speedy as ever, and its sub-6GHz 5G (Nationwide) coverage is expanding. This handset is C-band ready, which means Verizon customers will gain even broader sub-6GHz 5G support in the coming months. 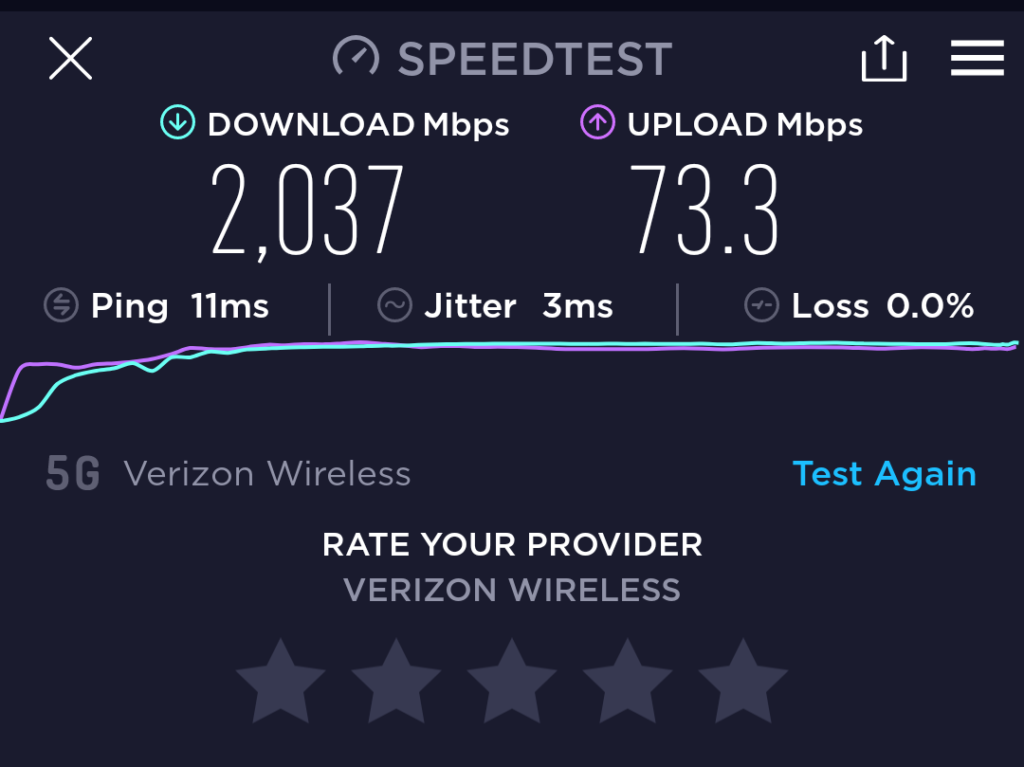 Unfortunately, the 2021 Moto Edge lacks its predecessor’s superb stereo speakers and headphone jack, which is a major step back. Verizon’s variant also includes Verizon Adaptive Sound, a terrible audio processing feature nobody asked for. At least the single mono speaker sounds loud and clear, and the Moto Edge supports analog and digital audio devices over USB Type-C, plus aptX HD and LDAC lossless audio over Bluetooth.

With Qualcomm’s Snapdragon 778G on board (the company’s best mid-range SoC), the Moto Edge performs like a champ. It handled my usual productivity and entertainment apps without skipping a beat. The unlocked version packs 8GB of RAM and 256GB of storage, and Verizon’s model comes with 6GB of RAM and either 128 or 256GB of storage. But unlike last year’s phone, the new Moto Edge doesn’t take microSD cards. 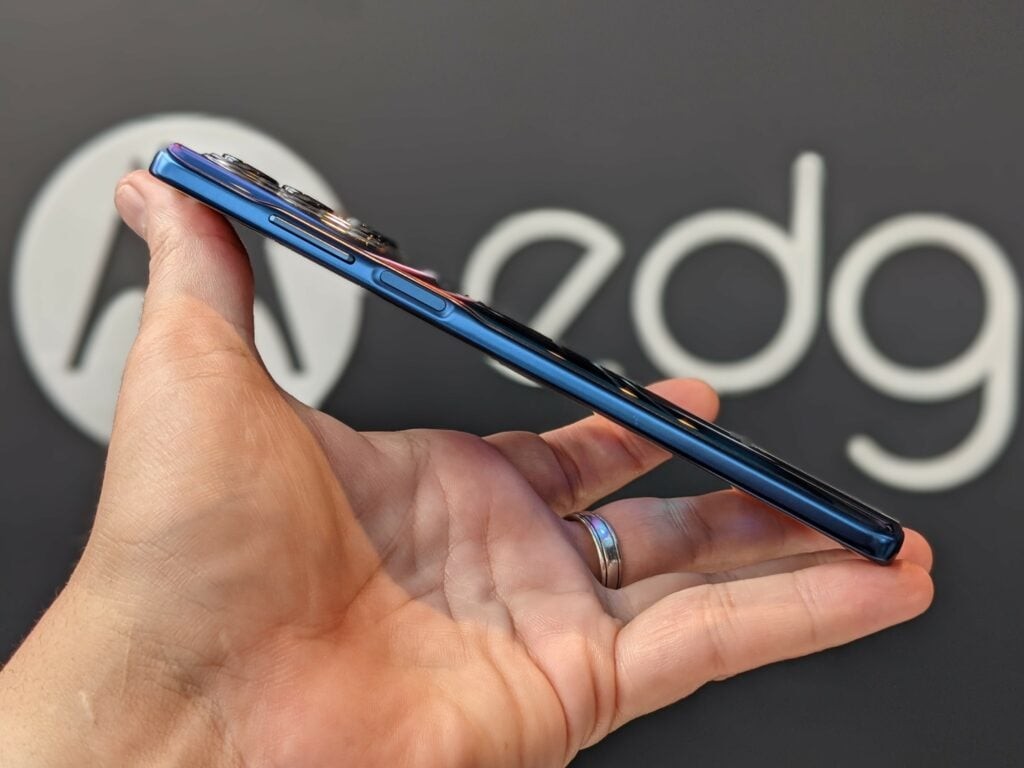 The remaining specs are pretty familiar, and include sub-6GHz and mmWave 5G (on Verizon’s variant), CAT 18 LTE, dual-band WiFi 6e (802.11ax), Bluetooth 5.2 (LE), NFC, and A-GPS / LTEPP / SUPL / GLONASS / GALILEO positioning. In addition, the Moto Edge comes with the standard collection of sensors. Haptics are decent, and the side-mounted capacitive fingerprint sensor is fast and reliable. So is face unlock.

Battery life is outstanding. In my tests, the Moto Edge easily lasted 2 days on a full charge under normal use. Obviously, combining a large 5000mAh battery and an efficient chip really helps, but Moto’s also done a great job optimizing the software here. When it’s time for a refill, the Moto Edge supports 30W wired fast charging, but not wireless charging. Unfortunately, Verizon’s variant doesn’t include a charger in the box.

The Moto Edge runs Motorola’s familiar lightweight skin on top of Android 11, and it’s a delightful user experience. Not only is the software very close to stock Android, but it includes several helpful tweaks that make the phone easier to use. For example, a double chop of the hand toggles the flashlight on and off. I’ve covered these features extensively before, so check out last year’s Moto Edge review for more details. 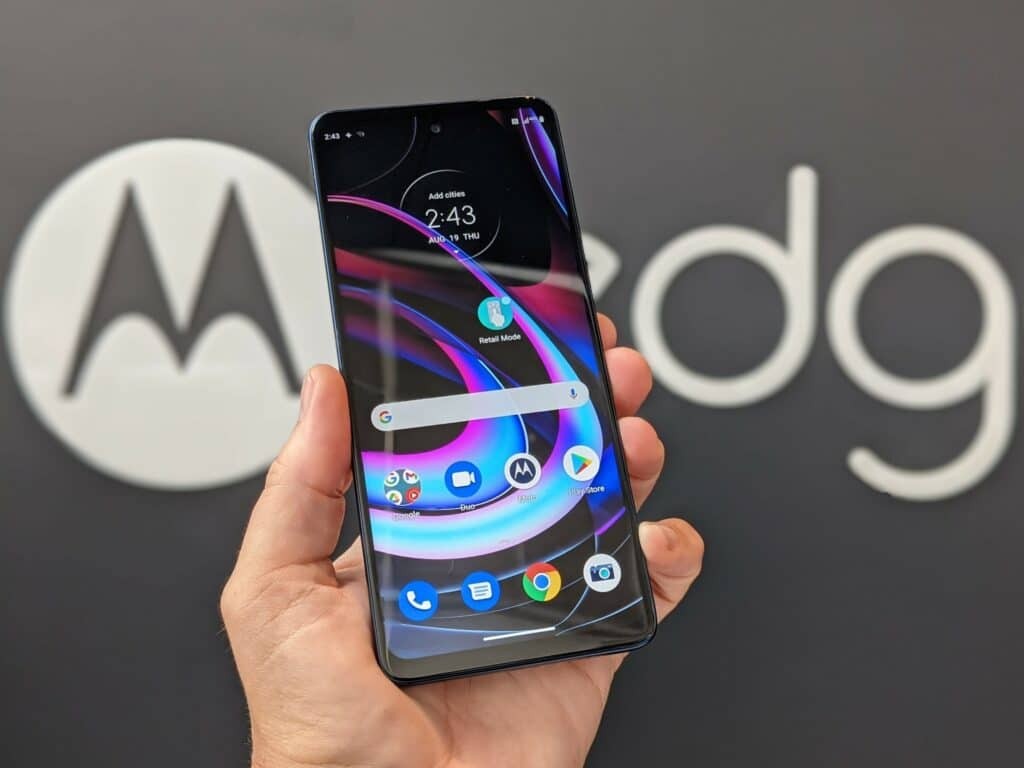 One feature Moto’s improved this time around is Ready For. It’s similar to Samsung DeX, and lets you connect to a separate display (over WiFi or with a cable), to turn your Moto Edge into a desktop computer, game console, or video chat system. You can also cast videos to the external screen while still using your phone, or even remote control your handset from a PC – with full copy / paste and file transfer functionality.

Sadly, the Moto Edge 5G UW for Verizon comes with a significant amount of pre-installed bloatware, including the carrier’s own redundant – and inferior — apps (like Messages+ and Voicemail), plus Amazon Shopping for some reason. While most of these apps can be disabled, there’s no way to fully uninstall them. On the plus side, Motorola is promising two years of security updates and two OS upgrades.

While it delivers a wonderful user experience, solid performance, and excellent battery life, the 2021 Moto Edge is a huge disappointment. The name doesn’t make any sense, the plastic build looks and feels cheap, and — between the bezeltastic LCD panel, lackluster ultrawide camera, and mono speaker — the hardware is riddled with compromises. Basically, this phone has lost its edge – it’s now simply dull.

For $550, the Verizon model is somewhat acceptably priced. But for $700, the unlocked version is ridiculously overpriced for a plastic handset missing an OLED display, OIS on the main shooter, and wireless charging. Unless you’re a Verizon customer who absolutely needs a massive screen and mmWave 5G – or you’re able to get a deal — save your money and buy the vastly superior Google Pixel 5a for $450. You’ll thank me later.