Two years ago, Moto introduced the first Z-series phones (a pair of flagships) alongside Moto MODS — batteries, speakers, and other accessories that magnetically latch to the back of the device. Modular handsets were all the rage back then (remember Project Ara?) and Moto’s solution was far more elegant than LG’s Friends, which launched alongside the G5 earlier that year. But it was the mid-range, lower cost Moto Z Play that captured accolades in 2016 by packing the same premium modular design, offering incredible battery life, and reintroducing the headphone jack. Moto further refined the formula last year with the Z2 Play, which eclipsed the lackluster Z2 Force flagship.

Today we have the Moto Z3 Play, the first Z-series phone with an 18:9 display. On paper, it follows the same approach as its predecessors. It even gains a second rear camera. Still, $500 is a lot of money for a mid-range handset in 2018. Does battery life still set the Z3 Play apart? Is Moto MODS support worth the price? Read our review to find out. 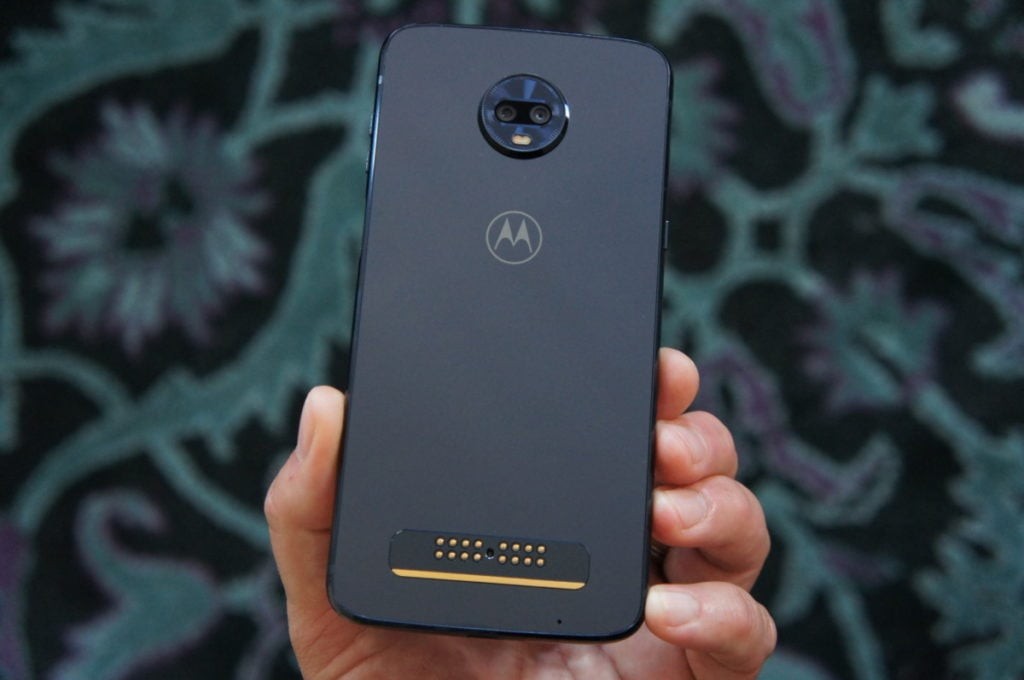 All Z-series devices look and feel pretty much the same. Iconic probably isn’t quite the right word, but it’s fair to say the design is familiar at this point if a little dated. The Z3 Play features the same classic Moto lines as its predecessors, going all the way back to the first generation Moto X. What’s changed here is the 6-inch 18:9 screen (up from 5.5 inches last year) and the missing fingerprint reader in front. Bezels are modest top and bottom, which gives the phone more modern vibe. The back is identical to other Z-series devices, with a glass cover, protruding circular camera pod, and MODS contact array.

It’s around the polished aluminum edges that things are slightly different this year. First, the headphone jack is gone, which is disappointing. Second, there’s a fingerprint sensor recessed into the frame below the volume rocker on the right side. Unlike Sony, Nextbit, and Razer handsets, the power/lock key isn’t integrated into the fingerprint scanner, but mounted separately on the left edge. This design is infuriating — even after a week, I often find myself trying to lock the phone by pressing the fingerprint reader only to remember that I have to click a separate button on the other side.

Rounding things up, there’s a SIM/microSD tray on top and a USB Type-C port on the bottom. My review unit is a lovely shade of dark purple called Deep Indigo, but the Z3 Play also comes in Onyx Black. Build quality is up to Moto’s usual high standards — this is a premium design like all other Z-series devices. Note that while it’s not IP-rated for water and dust protection, it‘s treated with a water-repellent “nano-coating” and should resist a dunk or two. 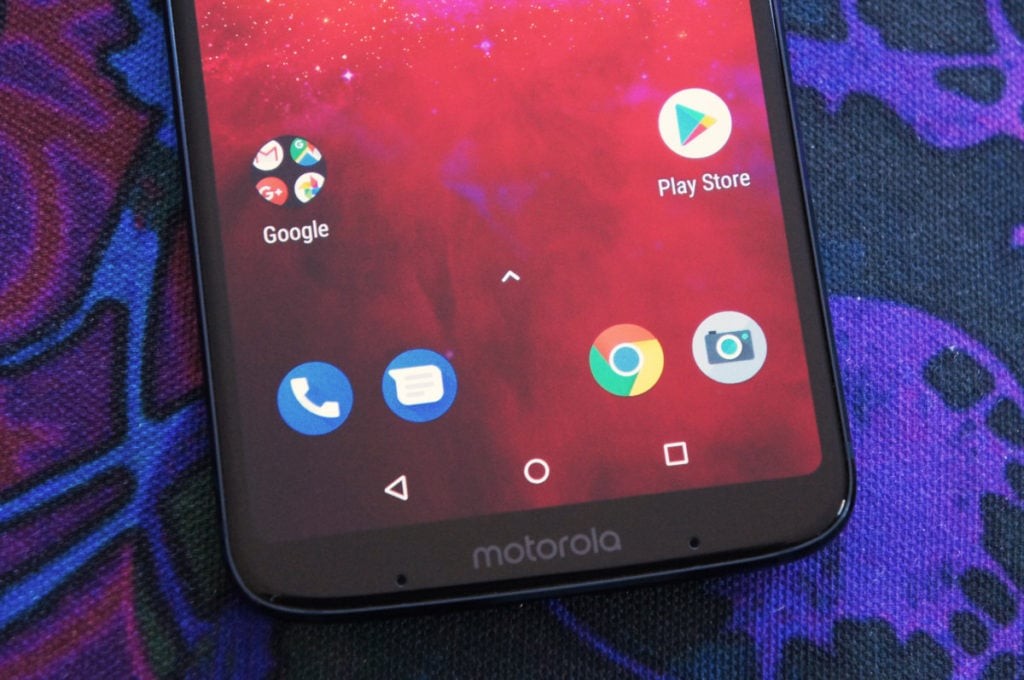 With the Z3 Play, Moto’s finally put an ultra-wide panel on a Z-series handset. This 6-inch 18:9 1080p AMOLED display is beautiful, with vibrant colors, inky blacks, and excellent viewing angles. It also gets bright enough to read in direct sunlight. There’s nothing to complain about here — Moto even gave this screen rounded corners, like the G6 I recently reviewed. You may want more than 402 ppi, a higher resolution panel (quad-HD), a taller aspect ratio, a notch like the cool kids, or smaller bezels. But ultimately, do you really need a better display than this? Probably not. 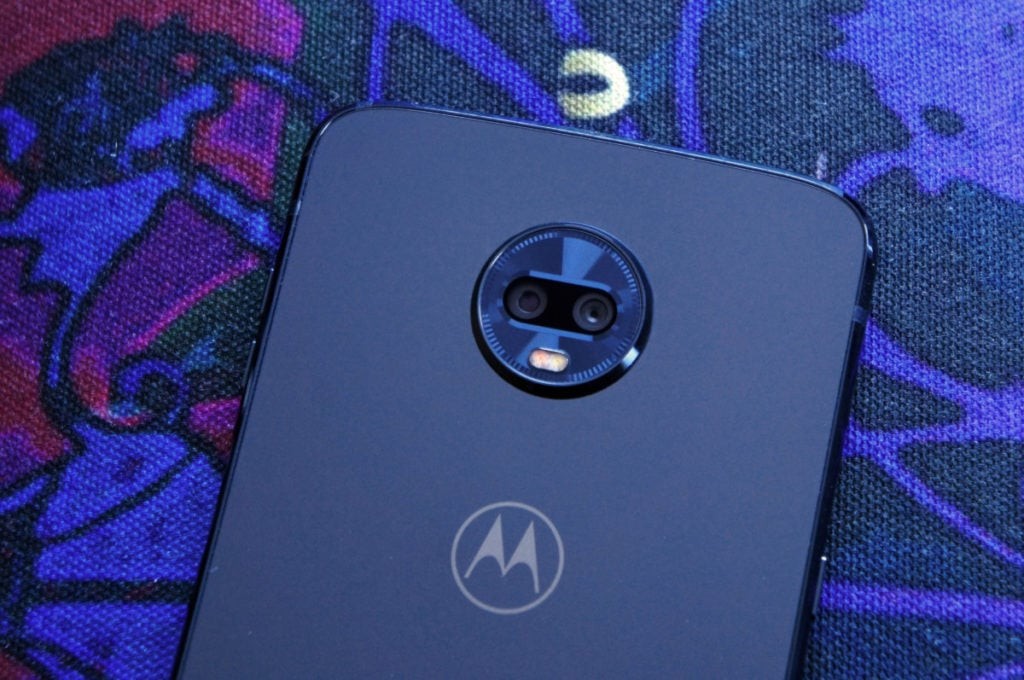 The Moto Z3 Play is the second Z-series phone with dual rear shooters (the Z2 Force was the first). It uses the same 12-megapixel f/1.7 1.4-micron dual-pixel PDAF sensor as last year’s Z2 Play paired with a 5MP fixed-focus lens for depth effects. A dual-color LED flash completes the package. In front, there’s an 8-megapixel f/2.0 1.12-micron camera (up from 5MP), but it lacks the selfie LED flash of its predecessors. These specs are very similar to the Moto G6 I recently tested, and so are the results — certainly acceptable, but definitely not good enough for a device costing twice as much.

At least the Z3 Play shooters provide some nice features. Moto complements the usual modes — panorama, slow motion, time-lapse, manual, and portrait — with a few creative options. Depth effects include a portrait editor (to readjust focus or set part of a picture B&W) plus cutout and spot color modes (which matte the background and isolate a specific color, respectively). OCR is supported using the text scanner option, and cinemagraph lets you animate part of an image. Group selfie combines three shots into a wider one, and face filters mimic Apple’s Animoji. The camera app even incorporates Google Lens and YouTube Live. 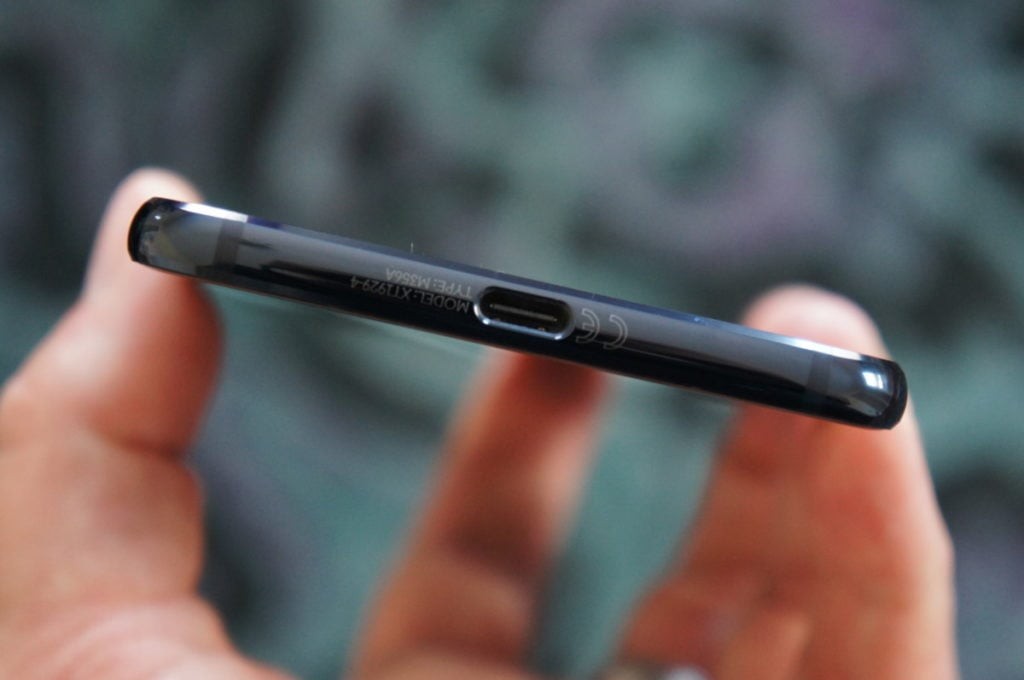 Moto handsets always deliver when it comes to reception, call quality, and data speeds, and the Z3 Play is no exception. I used it on Verizon in Portland, OR, and didn’t have any issues with network performance. Unlike most other unlocked phones, the Z3 Play is compatible with both GSM/LTE and legacy CDMA operators, making it suitable for Verizon and Sprint customers. Another common Moto strength is the speaker, which is expectedly loud and clear, and doubles as the earpiece. Unfortunately, the Z3 Play lacks a headphone jack, but it supports both analog and digital USB Type-C to 3.5mm adapters, and includes one in the box.

Audio through the built-in DAC and supplied analog dongle sounds better than most, with a detailed and accurate presentation. It’s clear Moto still cares about sound quality, even if the headphone amp is volume-limited when driving high-impedance headphones and in-ear monitors. 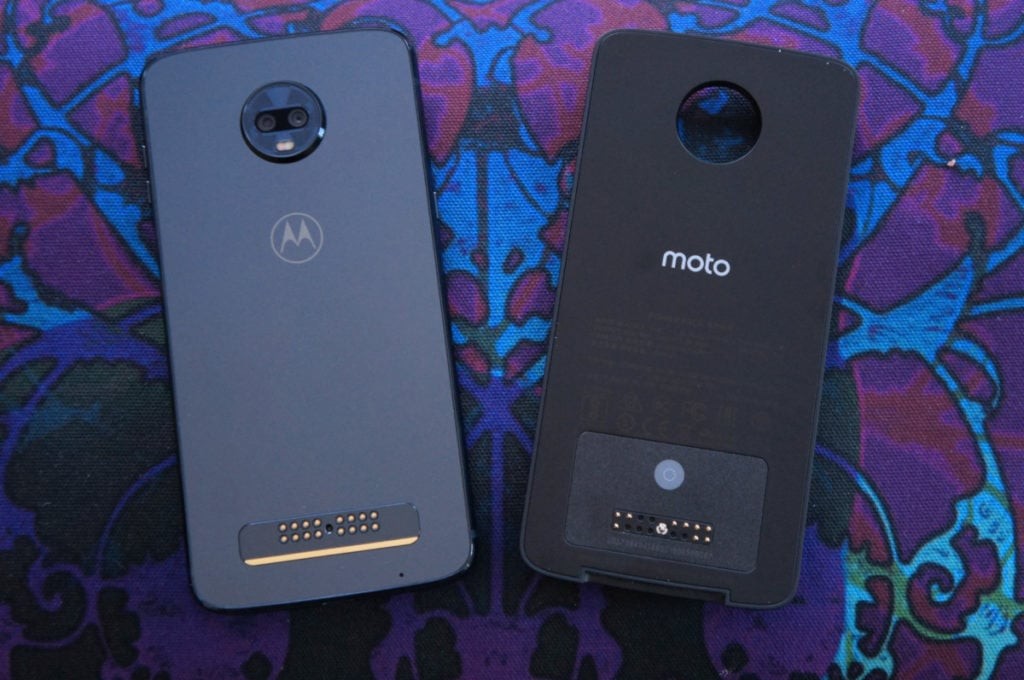 Spec-wise, the Moto Z3 Play packs Qualcomm’s recent Snapdragon 636, along with 4GB of RAM, 32 or 64 GB of built-in flash, and microSD support (up to 512GB) — a worthy upgrade from the Snapdragon 626 and 3GB of RAM found on last year’s base Z2 Play. This mid-range chipset strikes a great balance between speed and efficiency, delivering strong performance no matter the task and phenomenal battery life across the board. Obviously, gaming is still faster on flagship devices, but this isn’t going to be an issue for most folks. Let’s talk about endurance, though, because the built-in 3000mAh cell is only half the story.

See, Moto ships the Z3 Play with a 2220mAh power pack in the box. Not only is this a genius idea because it introduces potential customers to the MODS ecosystem, but it increases battery capacity by 1.75x and only adds 4mm to this svelte 6mm handset. The resulting battery life is just incredible: I’m currently on my 3rd day of light use (with the phone turned off for 8 hours each night), the power pack is depleted, but the on-board cell is still at 65%, with 24h of estimated time remaining. That’s 4 days on a charge! And when it’s finally time to refill, there’s a 15W fast charger bundled alongside that power pack. 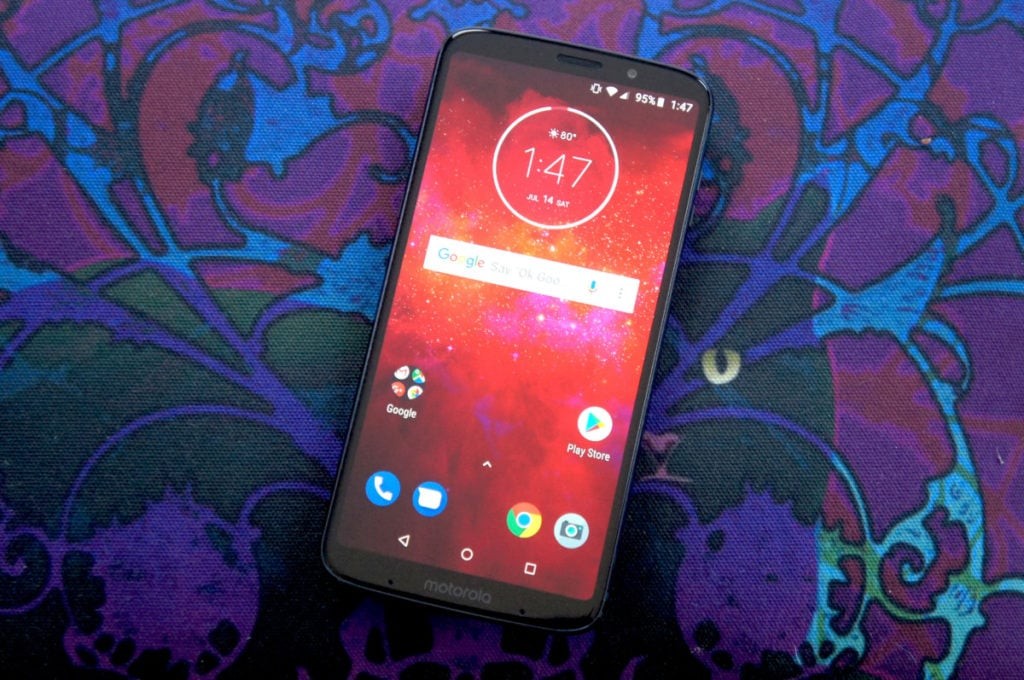 I’m a big fan of stock Android, and thankfully, so is Moto. The Z3 Play runs a mostly stock build of Android 8.1 (Oreo) enhanced by a few helpful features. Moto Actions map tasks to gestures —  it lets you activate the flashlight by chopping down twice, launch the camera app by twisting your wrist twice, or enable do-not-disturb by flipping the device over. There’s even a screenshot editor, and a one-button navigation mode. Moto Display wakes the screen to show notifications and other info (time, date, battery level) when you tap the handset or wave your hand over it. It also keeps the display on as long as you look at it.

And speaking of, the Z3 Play implements Moto’s own version of face unlock, which is pretty reliable as long as there’s enough light. Finally, Moto Voice is a wrapper around Google Assistant that uses the “Hello Moto” trigger phrase and adds system control functionality like turning on airplane mode, launching apps, etc… 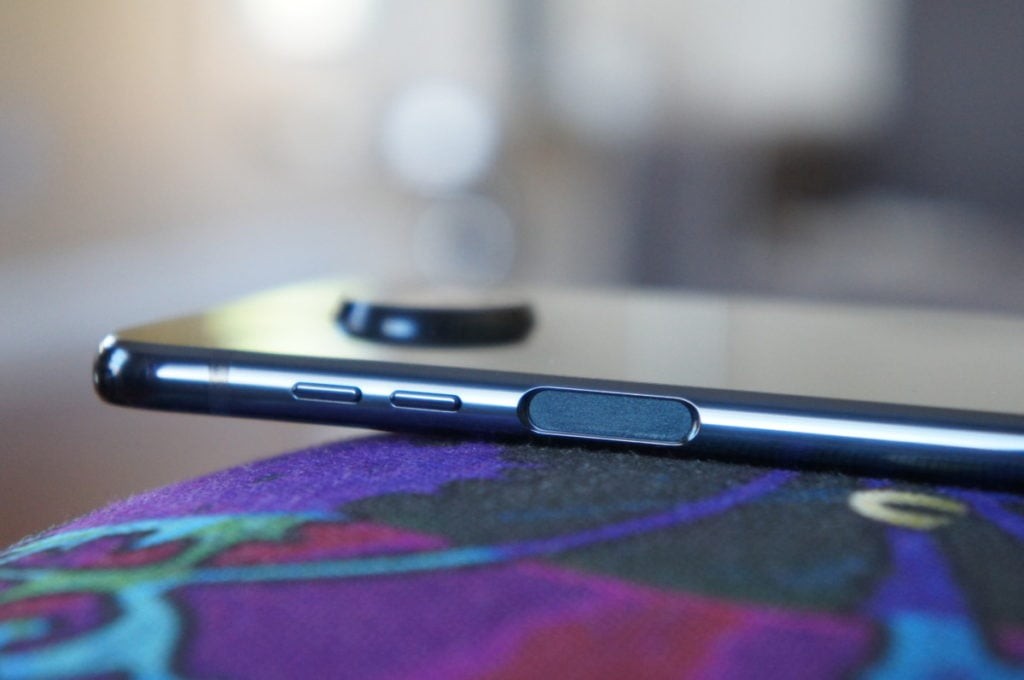 The Moto Z3 Play is a very nice mid-range smartphone that’s spoiled by an awkward power/lock key and fingerprint sensor placement, an underwhelming camera, no headphone jack, and — worst of all — an unrealistic price tag. It redeems itself with a gorgeous display, legacy CDMA support for Verizon and Sprint customers, and seemingly infinite battery life (with the supplied power pack). The MODS are super cool (I have many) but not practical enough day-to-day to be a selling point. At $500 (or even $450 for Amazon Prime subscribers) it’s somewhat difficult to recommend the Z3 Play when the awesome OnePlus 6 costs just $530.

Making things even more difficult, the lovely Moto G6 offers most of the Z3 Play experience for just $250 — it’s that good. The way I see it, there’s only one Z3 Play customer: someone with an existing array of MODS who wants to upgrade from an older Z-series device. And that’s OK.