The Moto Edge is a nice affordable flagship that’s let down by mid-range cameras. It’s worth $499, not $699.

It’s not a stretch to say that these days, Moto is best known for making worthy budget-friendly mid-range phones. The company’s G-series handsets — in particular — always deliver decent features and a great user experience at an affordable sub-$300 price point. But earlier this year, Moto decided to rejoin the big leagues with the Moto Edge+, a Verizon-exclusive $1000 premium flagship with 5G.

That’s nice, but $1000 is a lot of money, exclusives suck, and while the sub-$300 G-series is lovely, there’s a big hole in the $500 price range. Abroad, Chinese manufacturers are actively filling this gap with phones like the €399 OnePlus Nord and $550 Poco F2 Pro — for example. Here in the US, Apple recently joined the party with the excellent $399 iPhone SE, and LG just launched the $599 Velvet.

Which brings us to the Moto Edge, a $699 unlocked 5G handset currently on sale for $499. It’s built around Qualcomm’s Snapdragon 765G chip and inherits many of the Edge+’s specs — making it more of an affordable flagship than a premium mid-ranger. So, is the Edge any good? What corners did Moto it cut, if any? Is it worth $699 or just $499? And should you buy it? Let’s answer these questions in my review.

Obviously, the Moto Edge takes most of its design cues from the Edge+ flagship, including the extreme “waterfall” screen and oblong camera pod. Like most phones at this price, it’s a metal and glass sandwich. And I have to give Moto credit for making the Edge look and feel just as premium as the Edge+. My review unit came in a dark blue-ish hue called Solar Black, with Midnight Magenta being available in some markets outside the US.

In front, the Edge shares its 6.7-inch 90Hz 1080p OLED display with the Edge+, complete with the same crazy 90-degree curved edges that cover half the sides. I’m not a big fan of these kinds of screens, but at least Moto added some interesting features to make the most of it. The Edge also uses the same 25MP punch-hole selfie camera as the Edge+. Bezels are small, and the earpiece doubles as one of the stereo speakers.

Around the back, the 64MP main and 8MP 2x telephoto cameras are arranged in a vertical pod in the top left corner, along with a ToF (Time-of-Flight) sensor. The 16MP AF ultrawide shooter is located right above and in-line with this pod, and is flanked by an LED flash. A subtle Moto logo is visible under the rear glass. Inside, there’s a 4500mAh battery, but unlike the Edge+, there’s no wireless charging coil here.

You’ll find a headphone jack (yay!), USB Type-C port, primary mic, and speaker along the bottom edge, and the SIM / microSD tray and secondary mic on top. A very thin volume rocker and power / lock button (with tactile ridges) are located on the right side, but there’s nothing on the left. While the Moto Edge is a big handset (161.6 x 71.1 x 9.3mm), it’s narrower than the competition and easier to hold. Overall, I like this design a lot.

If you’re wondering about water resistance, the Edge lacks an IP rating (just like the Edge+). According to Moto, there’s a water-repellent nano-coating instead. 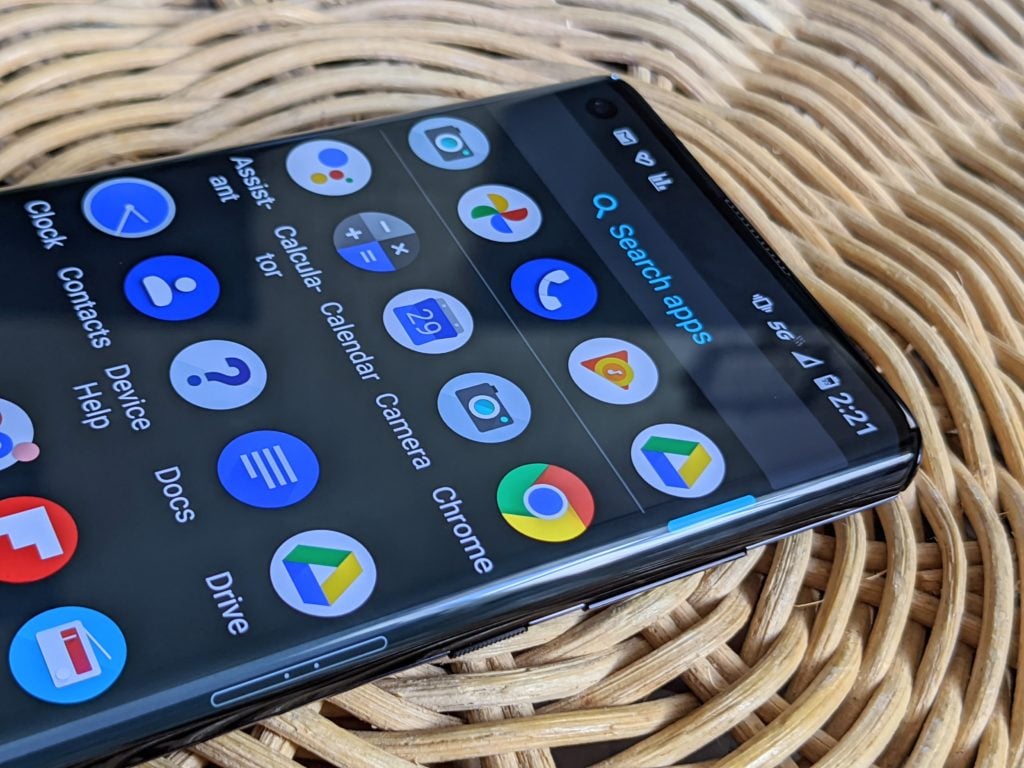 The Moto Edge packs a beautiful 6.7-inch FHD+ (2340 x 1080 pixels, 385ppi, HDR 10+) OLED display with a 90Hz refresh rate. But it’s the extreme 90-degree “waterfall” curved edges that really make this phone stand out — hence the “Edge” name. While this design hides the side bezels and looks futuristic, there are some drawbacks, like optical distortion. The curved edges also make framing shots a lot more difficult when using the camera.

On the plus side, this “waterfall” screen means the Edge is not as wide as its 19.5:9 aspect ratio implies. Moto includes a neat software feature that lets you double-tap a customizable area on the left or right side of the display to switch the aspect ratio to 21:9 — and back, blacking out the curved edges. The Edge also includes better than average accidental touch rejection, which reduces some of the usability issues.

As you’d expect from an OLED screen, colors are vibrant, blacks are nice and deep, and viewing angles are good. This panel also gets bright enough in direct sunlight. My only gripe, and it’s minor, is that the auto-brightness dims the display a bit too aggressively in low light. Overall, Moto didn’t cut any corners here. The Edge and Edge+ basically share the same screen — and that’s pretty cool.

Unlike the Moto Edge+, which went all out on camera specs, the Edge tones things down a bit, with results to match. The 108MP main shooter makes way for a 64MP setup, and the telephoto drops from 3x optical zoom to 2x. But the biggest downgrade from the Edge+ to the Edge is the removal of OIS on the main camera and telephoto. That’s really disappointing, especially when cheaper handsets like the OnePlus Nord and iPhone SE have OIS.

I could stop writing right now, and you’d pretty much know where this is going. The 64MP main shooter uses Samsung’s GW1 0.8-micron Quad Bayer sensor with an f/1.8 lens with PDAF. It “bins” (combines) 4 pixels into one for better low-light performance, resulting in a 16MP image with larger 1.6-micron pixels. The other two cameras are a 16MP f/2.2 1-micron 117-degree ultrawide (with AF plus macro), and an 8MP f/2.4 1.12-micron 2x telephoto.

Selfies are handled by a 25MP f/2.0 0.9-micron front shooter that also bins 4 pixels into one for a 6.2MP output. The Moto Edge supports video recording at up to 1080p 30fps (stabilized) with the selfie camera, and 4k 30fps and 1080p 60fps (stabilized) with the main and ultrawide shooters. It also captures slow-motion video at 1080p 120fps or 720p 240fps. The telephoto is not used for video — zooming is done digitally.

So what are the resulting photos and videos like? Honestly, it’s a mixed bag. Shots are pretty good in daylight, but the lack of OIS is really obvious in low light, with pictures looking soft and exhibiting blown highlights. Night mode helps, but only works with the main and selfie cameras and tends to over-sharpen things. Also, the main shooter has trouble with exposure at times. Video recording is decent, though, and so is the macro.

While the cameras are generally fine, Moto’s obviously cut some corners in the imaging department, and it shows. That’s unfortunate. 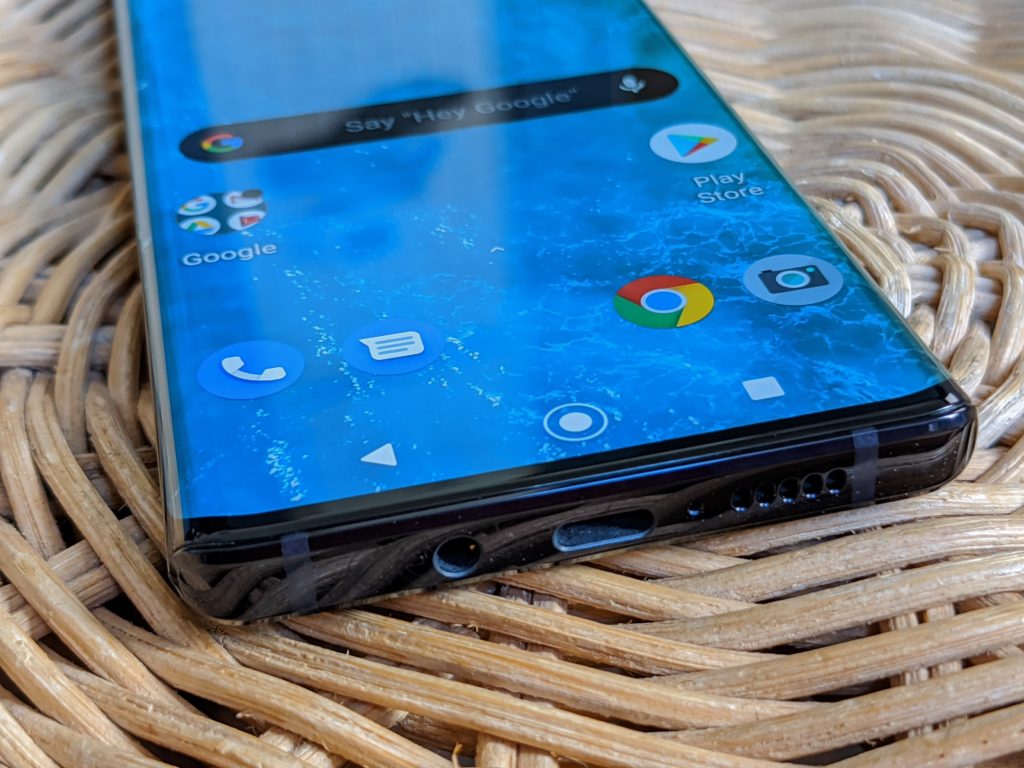 I used the Moto Edge primarily on AT&T’s and T-Mobile’s low-band 5G networks (bands 850MHz / n5, and 600MHz / n71, respectively) in and around San Francisco, but I also tested it on Verizon’s 4G LTE network. Obviously, the Edge doesn’t support Verizon’s mmWave 5G network — that’s what the Edge+ is for. Everything worked as expected: calls sounded loud and clear, and I didn’t have any problems with data speeds.

Like the Edge+, the Edge’s stereo speakers sound very nice, but don’t quite match Moto’s excellent G Power ($250) and G Stylus ($300). And unlike the G-series, there’s no Dolby branding for the audio settings. Regardless, the Edge has a headphone jack, and that’s just great. As a bonus, Moto’s built-in DAC and headphone amp are surprisingly decent too. Clearly, no corners were cut for audio. Kudos to that!