After reviewing Moto’s mid-range Z3 Play last year, it felt like the days of the Moto MODS might be numbered. The company quickly followed up with the lackluster and Verizon-exclusive Z3, which — instead of being a flagship — differed only slightly from the Z3 Play (price included). Stranger still, this phone used Qualcomm’s older Snapdragon 835 chipset yet promised to be “future proof” via a 5G MOD. Had Moto lost the plot? I was left scratching my head with more questions than answers.

So when the Z4 was launched ten days ago, it was both a surprise and a relief — surprise that Moto released a new Z-series handset, and relief that it is committed to supporting the awesome MODS for another year. Better yet, the Z4 is specced like a thoroughly modern mid-range phone complete with a teardrop notch, in-display fingerprint sensor, and Quad Pixel cameras. It even features a headphone jack and large battery, a nod to the much-praised Z Play and Z2 Play of lore.

Does this mean Moto’s back in the game? Is this the best Z-series handset to date? Looking past the MODS, is the Z4 a worthy mid-range phone? How does compete with the Pixel 3a XL and OnePlus 6T? Read on for my full review.

It’s true. From the back, all Z-series handsets look pretty much the same. You can blame the immutable MODS for this, but should you really? It’s the classic Moto shape, pleasant and familiar. The circular pod houses a single 48MP camera this time around, unlike the dual rear shooters from last year’s Z3 twins. A dual-color dual-LED flash and laser AF sensor completes the package. The Z4’s glass back is also home to the MODS contact array and Moto logo, as you’d expect.

Unlike last year’s Z3 twins, which have small bezels above and below the 6-inch ultrawide display, the front of the Z4 is almost all screen. To achieve this, Moto picked an even larger 6.4-inch edge-to-edge panel and covered it in Gorilla Glass 3. A teardrop-shaped notch houses the 25MP selfie camera, and a slit above the display conceals the earpiece. This is by far the slickest looking Z-series phone to date, and about the most screen you can realistically cram into this chassis. Well done.

Despite being a large handset with a sizeable 3600mAh battery, the Z4 is also pretty thin (7.4mm) and light (165g). Still, it feels solid and well made, thanks to quality materials. As such, the Z4 is definitely more premium than the Pixel 3a XL — on par with the OnePlus 6T. The aluminum frame is home to the mono speaker, secondary mic, and nano-SIM / microSD tray on top, volume rocker and power button on the right, and headphone jack, USB Type-C port, and primary mic at the bottom. There’s nothing on the left edge.

The Z4 isn’t IP rated, but Moto says it’s protected by a water-repellent “nano coating” which should survive minor dunking incidents. My review unit is Flash Grey, but there’s also a Frost White color coming at some point soon. 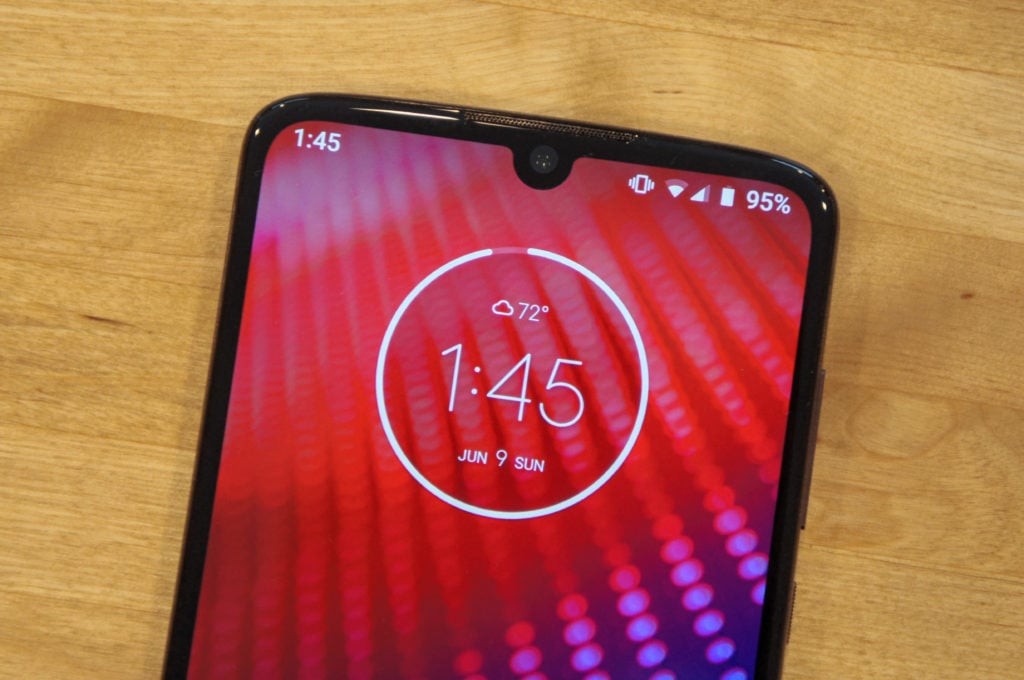 Moto really maximized the Z4’s screen-to-body ratio. It’s the first Z-series phone with an almost bezel-less display and teardrop-shaped notch. It uses a 6.4-inch edge-to-edge FHD+ AMOLED panel with a 19.5:9 aspect ratio (2340 x 1080 pixels, 403ppi). This is a nice screen, with rich colors, deep blacks, and wide viewing angles. It only exhibits minor off-axis color shift and is generally bright enough in direct sunlight. My only gripe is that the automatic brightness is sometimes too dim, something I hope Moto can fix in a future update.

Also, while I wasn’t able to test this, the Z4 is Microsoft Active Pen compatible, meaning it should work with any recent Microsoft Surface pen. Neat.

The Z4 features a single 48MP rear shooter with an f/1.7 OIS lens and phase detection AF. Yes, Moto appears to be using Sony’s IMX 586, an excellent sensor which combines (ie. bins) four 0.8-micron pixels into one for an effective image size of 12MP. It’s found in several other recent handsets, including the OnePlus 7 Pro. The selfie camera clocks in at 25MP with an f/2.0 aperture and 0.9-micron pixels. It also takes advantage of 4-in-1 pixel binning. Technically, this is a huge improvement over previous Z-series phones.

And here’s the good news. Overall, both Z4 shooters take decent pics, even in low light. Moto actually includes a night mode (called Night vision) which aims to mimic Google’s Night Sight. Still, the Z4 is no match for the Pixel 3a XL. Honestly though, are you surprised? Shots often look over-processed, and shadows often get crushed. While this can be fixed in post, it’s clear that Moto still has some fine tuning to do. Autofocus performance is also an issue, with occasional focus hunting, especially in low light.

Video recording tops out at 4k 30fps (stabilized) in the back and 1080p 30fps (stabilized) in the front, with stereo audio. In addition, the Z4 offers the usual bevy of Moto imaging modes — spot color, cinemagraph, panorama, group selfie, live filter, slow motion, and time lapse. There’s also a Portrait mode which relies on face detection instead of depth sensing. Strangely, you can only adjust the level of blur while shooting (not later while editing), and the results are predictably so-so.

Overall though, most folks will be quite happy with the Z4 camera. It’s on par with the OnePlus 6T’s shooter and absolutely bests the other Moto handsets. Plus, it’s only a matter of time until someone ports the Pixel 3a camera to the Z4.

I tested the Z4 in Portland on Verizon and AT&T’s LTE networks and didn’t run into any problems. Like most unlocked Moto phones, the Z4 supports legacy CDMA networks, a perk for Sprint and Verizon customers. The mono speaker, which is located on the top edge, sounds pretty clear. But while it’s loud enough for media playback, it’s often too quiet during calls, especially in noisy environments. This is odd considering Moto usually nails speakerphone performance. Perhaps this can be fixed in a future update?

Listening to audio through the Z4’s headphone jack is a pleasant experience. The DAC sounds better than average, delivering a detailed and accurate soundstage. As a bonus, the amp even handles tricky studio headphones just fine, albeit at lower volumes.

The Z4 is powered by Qualcomm’s Snapdragon 675, a recent mid-range SoC (octa-core, 11nm) designed to balance speed and efficiency. Moto mated this chip with 4GB RAM and 128GB of built-in storage (expandable to 512GB via microSD). As you’d expect, the Z4 keeps on ticking no matter what you’re doing. It breezes through Gmail like a boss and tackles Pokemon GO without drama. Sure, you’ll want a flagship to play the hard-core games, but otherwise, do you really need more speed than this? I doubt it.

Battery life is quite impressive. I only had four days to review the Z4 and I spent almost two of those days (38 hours) on a single charge. This included snapping most of the sample photos for this review, running multiple apps, testing various features, and listening to music for several hours. Not bad for a 3600mAh battery. I’m confident the Z4 will last an entire day of heavy use (busy conference), or two full days of light use (chill weekend). And while it doesn’t support wireless charging, Moto ships a 15W TurboPower fast charger in the box.

Spec-wise, the Z4 packs the usual radios (LTE / GSM / CDMA, WiFi 802.11ac, Bluetooth 5.0, and A-GPS / GLONASS / Galileo) and sensors (proximity, ambient light, gyroscope, accelerometer, and compass). It also includes NFC and FM radios, along with a nifty in-display fingerprint sensor. This optical sensor is pretty reliable, if rather slow — putting it somewhere between the slow and finicky OnePlus 6T reader, and the speedy and reliable OnePlus 7 Pro reader. Reliable beats slow, so I’m happy with it.

Want an almost stock Android experience on your next handset? Moto’s got you covered. The Z4 runs a clean build of Android 9 (Pie) with a few helpful tweaks and zero bloatware. Hurray! Keeping the software fast and compact makes for a lovely user experience — it’s a breath of fresh air. Like the company’s other recent phones, the Z4 features Moto Display, Moto Actions, face unlock (which works best when there’s enough light), and a screenshot editor (which scrolls content automatically).

Moto Display includes Peek Display, which wakes the screen for incoming notifications or when you tap the glass, and Attentive Display, which keeps the screen on while you look at it. Moto Actions are fancy gesture controls, like Lift to unlock, Three finger screenshot, One Button Nav (gesture navigation), Fast flashlight (chop down twice to toggle the flashlight), Quick capture (twist twice to activate the camera), Swipe to shrink (for one-handed use), Pick up to silence, and Flip for DND — phew. That’s basically it.

If you want a more affordable phone that’s compatible with the MODS, consider last year’s Z3 Play ($350). It features a similar design and specs, but comes with less storage (64GB), a smaller display (6-inch), and no headphone jack. Finally, the Moto G7 ($270) delivers most the Z4’s great user experience (minus the MODS) at a much lower price point.

With the Z4, Moto’s definitely crafted the finest Z-series handset to date. It blends the best attributes from its predecessors into a modern mid-range phone while still supporting those sweet MODS (including 5G). There’s a lot to like here — the premium design, quality screen, strong performance, great battery life, and pleasant user experience — to name a few. Still, there are few things holding the Z4 back. The camera needs tuning, the in-display fingerprint sensor is slow, and the speaker is too quiet for some calls.

Is the Moto Z4 worth $500? Yes, I think so. Besides the camera and updates, it’s a better handset than the Pixel 3a XL. For the first time since the Z2 Play, I can recommend the Z4 even to those who don’t care about the MODS. Finally, consider this: the Z4 comes with a 360 camera and will likely drop in price quickly. What’s there not to like?

”Buy
If you buy something from a GEEKSPIN link, we may earn a commission