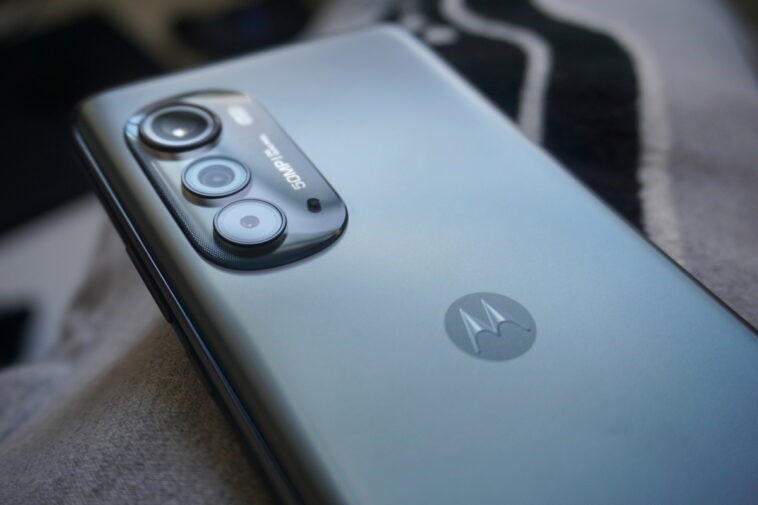 When you’re budget is in the $500-$600 range for a smartphone, you go into it knowing you’re giving up something that you’ll get from a premium flagship. In a way, that makes shopping in the mid-range a little easier — just find the device that keeps the premium features you must have while making cuts you can live with.

The Motorola Edge 2022 is an upgrade over its predecessor that gives the device a clearer identity as a mid-range phone with a premium gaming experience. Our Motorola Edge 2022 review will dig into why that is, and what sacrifices you’ll have to live with if you choose to snag one.

If a phone’s going to stand out as a gaming device, it needs to be big. The Motorola Edge 2022 is just that, thanks to a 6.6″ display. At 8.24 mm thick, it’s a little thicker than comparable devices, but despite that, is also a little lighter at 170 g — it felt noticeably lighter in hand than other mid-range devices I’ve used this year.

When holding the phone for longer gaming sessions, I appreciate the mix of thickness and light weight — I’ve often found particularly thin and large phones uncomfortable to hold for long periods of time, and I didn’t notice that with the Motorola Edge 2022.

The drawback is that it cut weight by using cheaper materials — the body is mostly plastic, instead of the metal builds we usually see now, even at this price. While I don’t think that’s a dealbreaker for everyone, I’d take note if you drop your phone a lot. This isn’t going to take the kind of punishment that a metal phone can take. Considering it’s harder to find third-party cases for phones not made by Samsung or Apple, I would have liked to see at least a clear silicone case included with the phone.

It won’t hold up to the elements as well as other mid-range phones, either. It’s got an IP52 rating, so I’m not sure I would risk using it in anything other than light rain. Protection against dust isn’t bad, but all the same, know that with the plastic in the build plus this, the Motorola Edge 2022 isn’t the outdoorsy type.

Also, there are no color options! That’s kind of a bummer.

But, the Motorola Edge 2022 isn’t trying to be rugged — it wants to keep you entertained, whether that’s in transit or at home. That’s why the marquee feature, and the biggest improvement over the Motorola Edge 2021, is its display. The 6.6″ 1080p OLED display makes for terrific image quality, especially with the brightness cranked to take advantage of the contrast that OLED displays are capable of. While gaming and watching shows on Netflix, image quality was top-notch, especially for darker scenes.

The display also features a refresh rate of up to 144Hz, which is mostly important for gaming. For our Motorola Edge 2022 review, I played PUBG to test out faster-paced gaming, and definitely noticed smoother gameplay compared to other mid-range phones — we don’t usually see 144Hz at this price point, so again, if gaming is your thing, it’s a phone to consider.

Dolby Atmos sound processing is definitely welcome, but the on-board speakers aren’t up to the task. I don’t usually expect too much from onboard speakers, but the bass response was noticeably weaker than other phones I’ve gotten my hands on this year.

If you usually use Bluetooth headphones, you’ll want to keep using them, even at home. It’s worth mentioning that there is no headphone jack, either — the norm these days, but it’s a feature that would’ve been nice on a phone that is otherwise a pretty solid entertainment device.

The Motorola Edge 2022 runs on a mid-range MediaTek Dimensity 1050 chipset, which I found to be up to the task for gaming and videos. I played PUBG for an hour with brightness cranked to the max and on the higher graphics setting, and found gameplay to remain smooth throughout. Our review unit has 8 GB of RAM, for reference — there are configurations available with 6 GB RAM, so I can’t speak to those.

For everyday use, the Motorola Edge 2022 held up well. I didn’t notice much slowness or stuttering when web browsing, even when I had my usual way too many tabs open. Can’t say I noticed the difference between this mid-range phone and the current slate of premium phones during an average day’s use, which isn’t always the case! Of course, it slows down a bit when you throw professional-grade editing tasks at it, but if you’re doing that, this probably wasn’t a phone on your shortlist, anyway.

Poking around early reactions to the Motorola Edge 2022, I noticed that other folks had issues with the fingerprint reader, but I didn’t have any issues. Not sure what the reason for the variance is there, but it’s safe to say your mileage may vary.

How good is the Motorola Edge 2022 battery life?

Gaming is a big part of this Motorola Edge 2022 review, and as good as it has performed thus far, it wouldn’t mean much if gaming tanked the battery! Fortunately, the battery situation here is pretty solid. It’s got a big 5,000 mAh battery, and paired with a more modest chipset, that means you can get over a day’s use as long as you don’t do anything too intensive. I would also use dark mode as often as possible to make the OLED display more efficient, since those pixels go dark when black is displayed.

But, I was more interested in how the phone would hold up to extended gaming and video watching sessions. I set brightness to 100% for both, and the results weren’t bad. I played PUBG on HD settings for an hour, which took me from 73% to 56%. An hour of Netflix with the same brightness took me down to 44%. Good enough to where you can take full advantage of the phone’s capabilities on a commute or waiting room while still getting a full day of life out of the phone.

Charging the phone depends on your gear. It can be used with a 30W charger, which will charge pretty quickly, but nowhere near the level we’re seeing with phones like the Xiaomi 12 Lite. Regardless, the phone doesn’t ship with a charging brick, so you’ll have to go track one of those down yourself to maximize the phone’s value.

Wireless charging up to 15W is a nice addition, and if you’re a really efficient user, you can actually use that big 5,000 mAh battery to charge other devices (but only up to 5W, so very slowly).

How good is the Motorola Edge 2022 camera?

The Motorola Edge 2022 has a three-sensor camera array — a 50MP sensor, a 13MP sensor paired with an ultra-wide angle lens, and a depth-sensing camera that can work as a macro lens. The result? Passable at this price, but with better camera options available in the mid-range smartphone market, it doesn’t land as an argument for buying the phone, either.

For this part of our Motorola Edge 2022 review, I grabbed a variety of shots to test the camera array, and found that while color and detail remain solid in good conditions, things break down quickly from there. By default (and you can do a lot of tinkering with the pro mode), the phone needs a pretty long shutter speed at night, which means you’re going to need an impossibly steady smartphone hand to get the most out of those nighttime photos. The portrait mode felt more processed than gained by the depth-sensing camera, as I sometimes got blur around the edges of the subject.

Color reproduction was solid, and in conditions, I really liked the results — they felt more natural instead of having the heavily processed look we’re used to. But, there are so many downsides that it gives the edge to other mid-range phones like the Google Pixel 6a. It’s not a bad camera, but it won’t be why you buy it, either.

For the most part, Motorola doesn’t add too much to stock Android. Now, our Motorola Edge 2022 review unit was a T-Mobile version of the phone, so you know that came with the usual carrier bloatware, but the phone can be purchased unlocked.

One useful addition is gesture shortcuts. These can be customized, but out of the box, you can do things like twist the phone twice to bring up the camera, swing the phone in a chopping motion two times to activate the flashlight, or touch the screen with three fingers to take a screenshot.

I imagine opinions will be all over the map here. I loved the three-finger screenshot gesture — it’s way better than pressing two buttons on the side of the phone at the same time — but I feel like I’d rather tap a physical button to activate the camera over twisting my wrist. The chopping motion for the flashlight was a little awkward, but I do like the idea of having a quick way to activate the flashlight from the lock screen in a dark area. It seems like something you’d rarely have to use, but something you’d be grateful for in those rare cases. The motion-based gestures are tuned just right, too — not so sensitive that you can accidentally activate the camera or flashlight, but you don’t have to flail wildly to get them to work, either.

The Motorola Edge 2022 can be purchased for $499 for now (256 GB/8 GB RAM) at Motorola.com, with Motorola indicating that it will regularly retail for $600. There are a lot of mid-range phones out there cheaper than that! But, none of those offer a 1080p 144Hz OLED display combined with this smooth performance. Is that worth the extra money? I think it still comes down to how much you value mobile gaming and entertainment. The best way we can sum up our Motorola Edge 2022 review: if you want that premium gaming experience (and battery life to support it) in an otherwise mid-range phone, I do think this is the phone to get, assuming you’re OK with hits to build quality and camera performance.