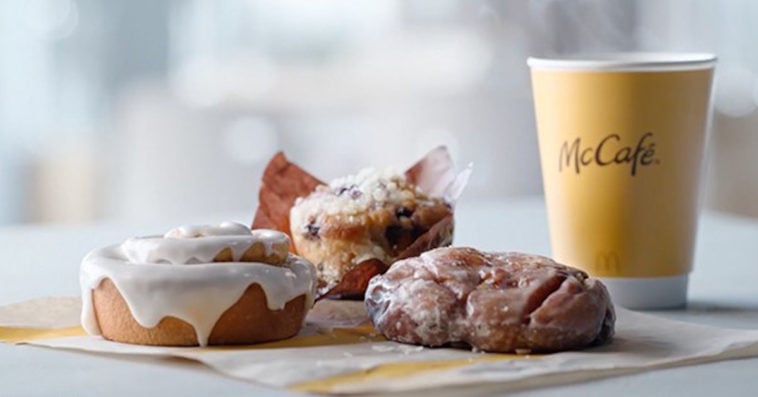 McDonald’s has expanded its McCafé lineup with new bakery items that fans can get for free starting next week.

Launched on Wednesday, McDonald’s new pastries include an apple fritter, a blueberry muffin, and a cinnamon roll. And to get as many people as possible to sample the new baked goods, the fast food chain is giving away one of the new menu items for free with a purchase of a hot or iced coffee on orders placed through its mobile app. The promo will run from November 3rd through November 9th and is valid once per day at any time.

McDonald’s apple fritter, blueberry muffin, and cinnamon roll are the fast food chain’s first new bakery items in nearly a decade, and are expected to help fill the void created by the absence of McDonald’s All Day Breakfast lineup that was removed from the restaurant’s menu in March because of the pandemic.

Breakfast was once dominated by McDonald’s, but since more fast food chains launched their own menus for the first meal of the day, the Golden Arches has struggled to entice more customers in the morning. Its most notable rival is Wendy’s, which introduced its new breakfast menu in March.

The promotion for McDonald’s trio of new sweets is the latest deal offered by the company with a focus on attracting more consumers to use its mobile app. Last month, customers could order a six-piece Spicy Chicken McNuggets through the app and get another six nuggets, either classic or spicy, for free. And earlier this month, McDonald’s rolled out the J Balvin Meal with an offer to get any size McFlurry for free after ordering the meal through the app.

Morningstar analyst R.J. Hottovy told CNN that increasing the app’s user base is “key” in boosting sales because promotions could build customer loyalty, with future offers likely persuading people to come back.