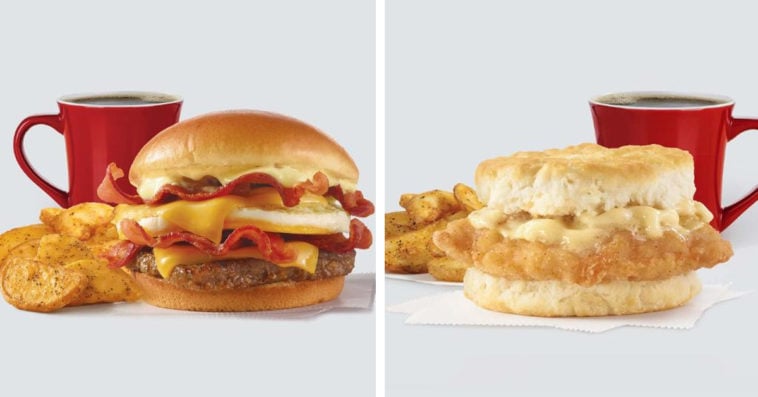 Wendy’s is officially re-entering the highly competitive breakfast battle on March 2nd, and to make sure that it’s going to be successful this time around, the fast food chain worked closely with its franchisees to craft a much simpler range of menu items with broad appeal and a few fun twists.

Wendy’s breakfast menu consists of nine sandwiches: the Breakfast Baconator, the Honey Butter Chicken Biscuit, the Maple Bacon Croissant, and six other sandwiches served on croissants, biscuits, and classic buns with decks of eggs, cheese, and meat. The lineup also includes a new blend of coffee and Frosty-ccino, which is a smooth, cold-brewed coffee swirled with the chain’s legendary vanilla Frosty mix. Check out the photos of Wendy’s breakfast items in the gallery below:

During an analyst call discussing the company’s fourth-quarter and full-year financial results on Wednesday, Wendy’s chief financial officer Gunther Plosch said that 300 locations across the country are already serving breakfast ahead of Monday’s official launch. And the result, so far, is very encouraging.

Over the last three decades, Wendy’s tried to serve breakfast all over the country three times, but all those attempts failed to move past regional tests. But unlike those past breakfast iterations, franchisees didn’t have to pay for any new equipment this time around, as Wendy’s rigorously crafted the menu to avoid such costs. In fact, the most significant kitchen additions to all Wendy’s locations are just egg rings.

Despite being the priciest Wendy’s breakfast sandwich, the Breakfast Baconator is the top seller in test markets. It is followed by the Honey Butter Chicken Biscuit, which is basically a breaded chicken sandwich, slathered with whipped maple honey butter. “I can tell you that McDonald’s is not doing the same thing we’re doing to our chicken and neither does Chick-fil-A or anyone else,” said Kurt Kane, Wendy’s U.S. president and chief commercial officer.

Though Wendy’s took about 50 iterations to nail the biscuit recipe, John Li, Wendy’s vice president of culinary innovation, revealed that the hardest breakfast menu item to perfect was the coffee. Ultimately, Wendy’s coffee masters and its vendor landed on a Rainforest Alliance-certified Indonesian blend with expensive Sumatran beans. “Without good coffee, you’re sunk, no matter what market,” Li said.

Though Wendy’s breakfast is expected to operate at a loss this year, the chain’s management is confident that it will help boost the chain’s overall sales in the long run.