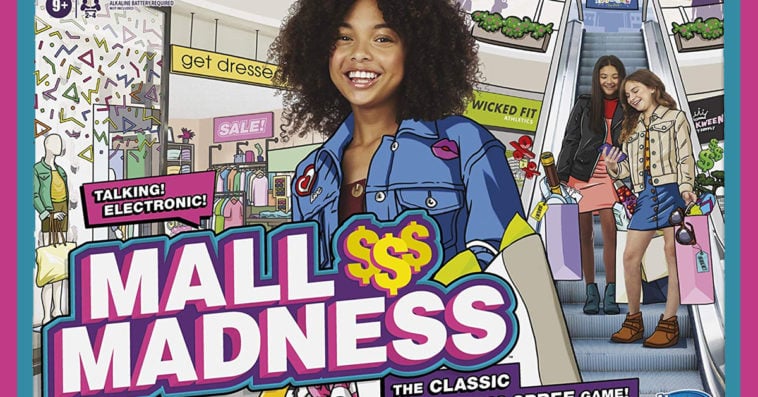 Mall Madness, the classic shopping spree board game from Hasbro which has been off the shelves for over 15 years, is coming back with a new edition this fall.

Similar to the original that was released back in 1988, the new edition comes with a 3-D game board that depicts a two-story mall that houses 22 stores, including a nail salon, candy store, jewelry store, arcade, shoe store, electronics store, and more.

Like the 1989 version of the game, the 2020 edition features a talking electronic unit that tells players where to move, announces surprise clearance sales, and makes fun sounds effects when players swipe their fake credit cards to buy something.

Though certain storefronts get a facelift in the new edition, the gameplay remains the same. Players should strategically use their money to purchase six items on their list. If they run out of cash, they have to use a turn to make a stop at the ATM. The first player to successfully buy all six items and make it back to their parking lot wins the game.

In the original game, players use different colors of pawns as markers. But in the new edition, players will get to choose a personality and play as Gwen, Sage, Avery, or Dax.

In addition to the 1988 and 1989 versions of the game, Mall Madness also got a 1996 edition, a 2004 edition, as well as editions based on Hannah Montana and Littlest Pet Shop.

Priced at $24.99, Mall Madness will be available online and at major retailers nationwide on October 1st. An Amazon pre-order listing for the game went live last week, but is now unavailable.

READ  Pampers diapers and Tampax tampons are about to get pricier