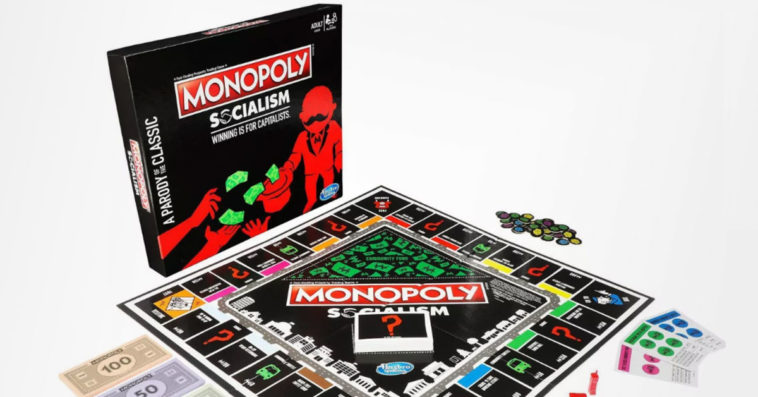 Monopoly Socialism, the newest edition of Hasbro’s popular board game, is coming up against some criticism.

Shortly after the launch of Monopoly Socialism, which parodies the concept of socialism, a number of critics have taken online to share their negative comments about the game. The most prominent among these detractors is Nick Kapur, an assistant professor of History at Rutgers University whose viral thread on Twitter got very deep into the socialism-themed Monopoly game.

At the beginning of his lengthy thread, Kapur called Monopoly Socialism “mean-spirited” and “woefully ill-informed” because of its very poor understanding of what socialism really is.

I bought a copy of Hasbro’s mean-spirited and woefully ill-informed “MONOPOLY: SOCIALISM” board game so you don’t have to – a thread 1/ pic.twitter.com/YhZWDjkAnj

For example, there is a community fund, and if a player doesn’t have enough money to pay for something, the community fund automatically pays the difference. Which seems kinda socialist at first glance. 9/ pic.twitter.com/R7uTUFcfeC

But the community fund is gleefully and deliberately designed to be constantly running out of money. At this point, the only way to fill it back up and keep the game going is for players to donate money to it voluntarily. 10/

So this is not really a socialist model. It’s more of a billionaire philanthropy model.

It’s akin to conservatives constantly saying, “If Warren Buffett likes taxes so much, why doesn’t he just donate to the IRS?” 11/

Similarly, when you pass go, you get a $50 “living wage,” which was presumably reduced from the usual $200 to emphasize that “socialism makes everyone poorer” or somesuch. 13/ pic.twitter.com/tvEqdf2z5F

But then when the minimum wage is increased, this wage doesn’t actually increase, but instead, once again for no reason the community fund pays money to a private bank. 14/ pic.twitter.com/8LBOk00laB

As expected, there are people who have the same opinion as Kapur.

I’m actually shocked something this ignorant and mean spirited would be produced by a non-fringe company. Seems more like something you’d find in a Christian bookstore next to the Kirk Cameron Left Behind films.

“monopoly: socialism” fails at the most basic level as a parody, because its systems have no connection to the way socialism, or social democracy (what this game thinks “socialism” is) even works

socialism doesn’t involve private banks, or competing against each other for profit

That’s what stood out to me. It’s making fun of a version of “socialism” that you’d get from someone telling you secondhand what they heard on Fox News. The game designer in me wants to see if there’s something salvageable in this premise. It’s wasted here.

But since Monopoly Socialism is branded as a parody, it appears that there are more people who think that the inconsistencies and lapses of the game should only be regarded as part of its satire.

I see your gripes, but with the game’s origins being a satirical take on the renters market, could this version not be seen as a simple satire of socialism?

As was the original though right? With knowing that, calling out the inaccuracies of it seems kind of moot no? The original game didn’t represent its points in a realistic fashion either.

Funnily enough, instead of getting dissuaded, lots of Twitter users became more interested in buying the game after reading Kapur’s impassioned thread.

Thanks a lot! I gotta buy one now. Always open for new experiences and what better way to experience socialism than with a fun parody game that could easily offend thin skinned drones! Refreshing! pic.twitter.com/73RL4X23Mm

What!? You mean somebody made a game that promotes ceaseless mockery of socialism? Yeah! Gimme two!
Oh @vallachian, where are you? You’re going to love this!

What!? You mean somebody made a game that promotes ceaseless mockery of socialism? Yeah! Gimme two!
Oh @vallachian, where are you? You’re going to love this!

Thank you for selling another one, I’m gonna go look to buy one right now.

Damn! I think you convinced me to buy this now. Game seems pretty damn funny

I see your gripes, but with the game’s origins being a satirical take on the renters market, could this version not be seen as a simple satire of socialism?

Monopoly Socialism, which for some reason is not featured on the Hasbro website, retails at Target for $19.99. Below is the game’s description:

“In the Monopoly Socialism game players move around the board working together to make a better community by managing and contributing to projects such as a no-tip vegan restaurant, an all-winners school, or a museum of co-creation. But nobody said that cooperation is easy! You’ll have issues with your neighbors, your DIY community projects go awry, you’re constantly voting to shake things up, and there’s always an emergency that requires dipping into the Community Fund!”