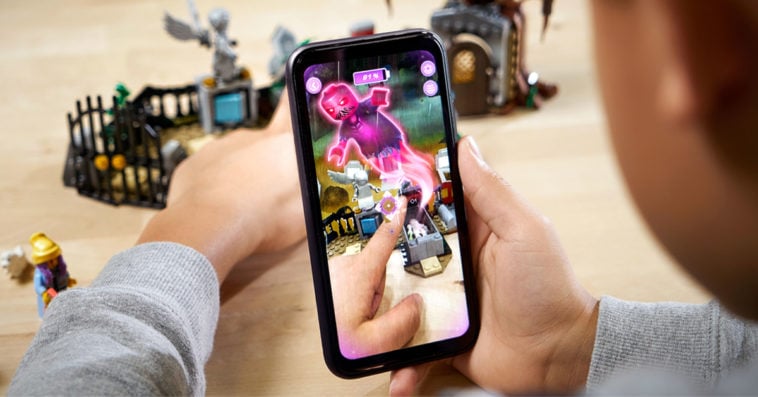 LEGO Hidden Side follows the story of teenage bloggers Jack and Parker who both attend Newbury High School. One day, through an app on their mobile phones, the teenagers discover that their hometown is actually overrun with ghosts. With the play theme’s accompanying mobile AR app, LEGO builders assume a first-person perspective and join Jack and Parker explore the supernatural side of Newbury and solve paranormal mysteries surrounding it.

The gameplay prompts players to hold their phone up to the physical LEGO models and interact with various elements, aka “points of possession,” in the AR game. Points of possession release virtual ghosts that players must capture to stop the haunting. To progress the play, players should keep one hand in the physical world and the other in the digital world.

Developed for children 7 years old and up, LEGO Hidden Side is comprised of eight building sets, which are as follow:

This 174-piece mad scientist-inspired lab playset features a lot of cool tech details and scientific equipment, including a Tesla-powered chamber. Players must defeat the ghost figure that’s haunting the friendly janitor in the app. Besides the haunted janitor minifigure, this $19.99 set also includes a hero minifigure, a female scientist minifigure, and a cute ghost dog figure. 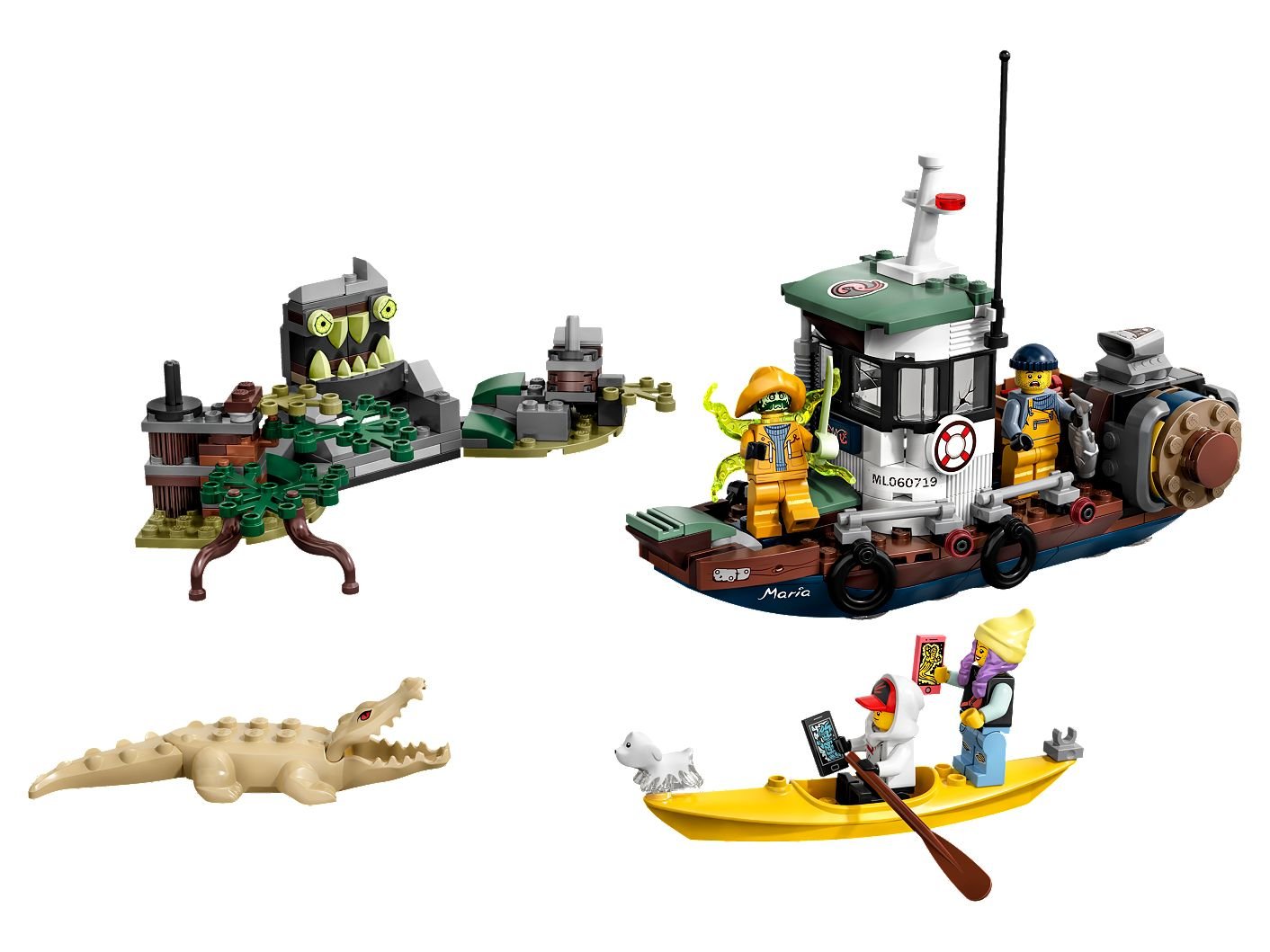 Featuring a nautical-inspired shrimp boat that can split into two and a brick-built cliff that can become haunted, this 310-piece set provides hours of imaginative play. With a price tag of $29.99, this set also includes 2 hero minifigures, haunted captain and son minifigures, a ghost dog figure, and an albino alligator figure. 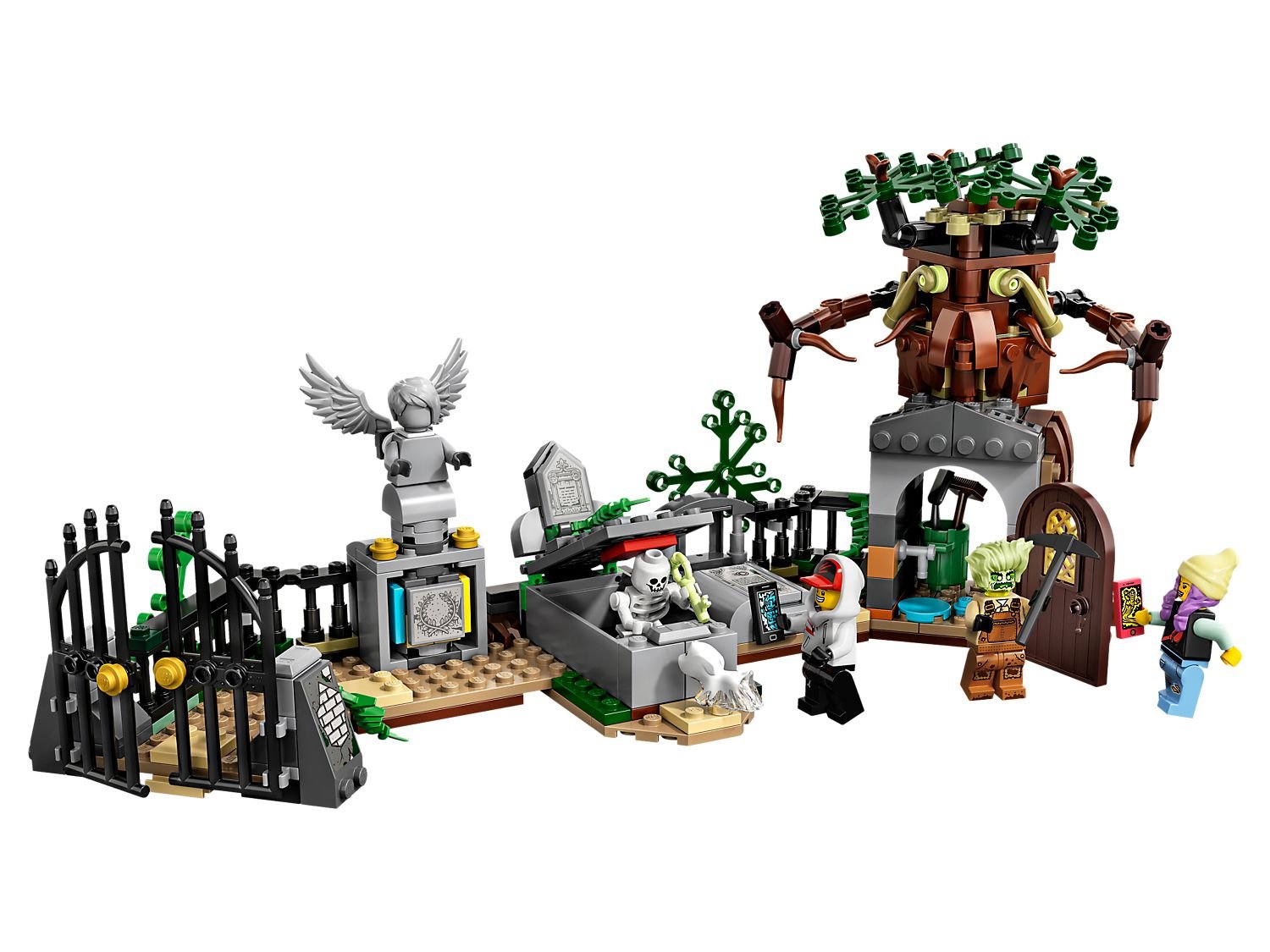 This $29.99 brick set is packed with scary graveyard details, including a tombstone statue that twists and a grave that opens. Completing this 335-piece construction set are a ghost dog figure, a gardener figure, girl and boy minifigures, and a haunted tree with posable arms.

Comprised of 428 LEGO pieces, this toy set features a stunt truck with a working rear suspension, allowing players to try some cool stunts and jumps. Priced at $39.99, this set also includes a 3-wheel motorcycle chopper being driven by two haunted bikers. While El Fuego drives the truck, Jack and his ghost dog friend must use the toy cannon mounted at the truck’s rear to de-haunt the bikers. 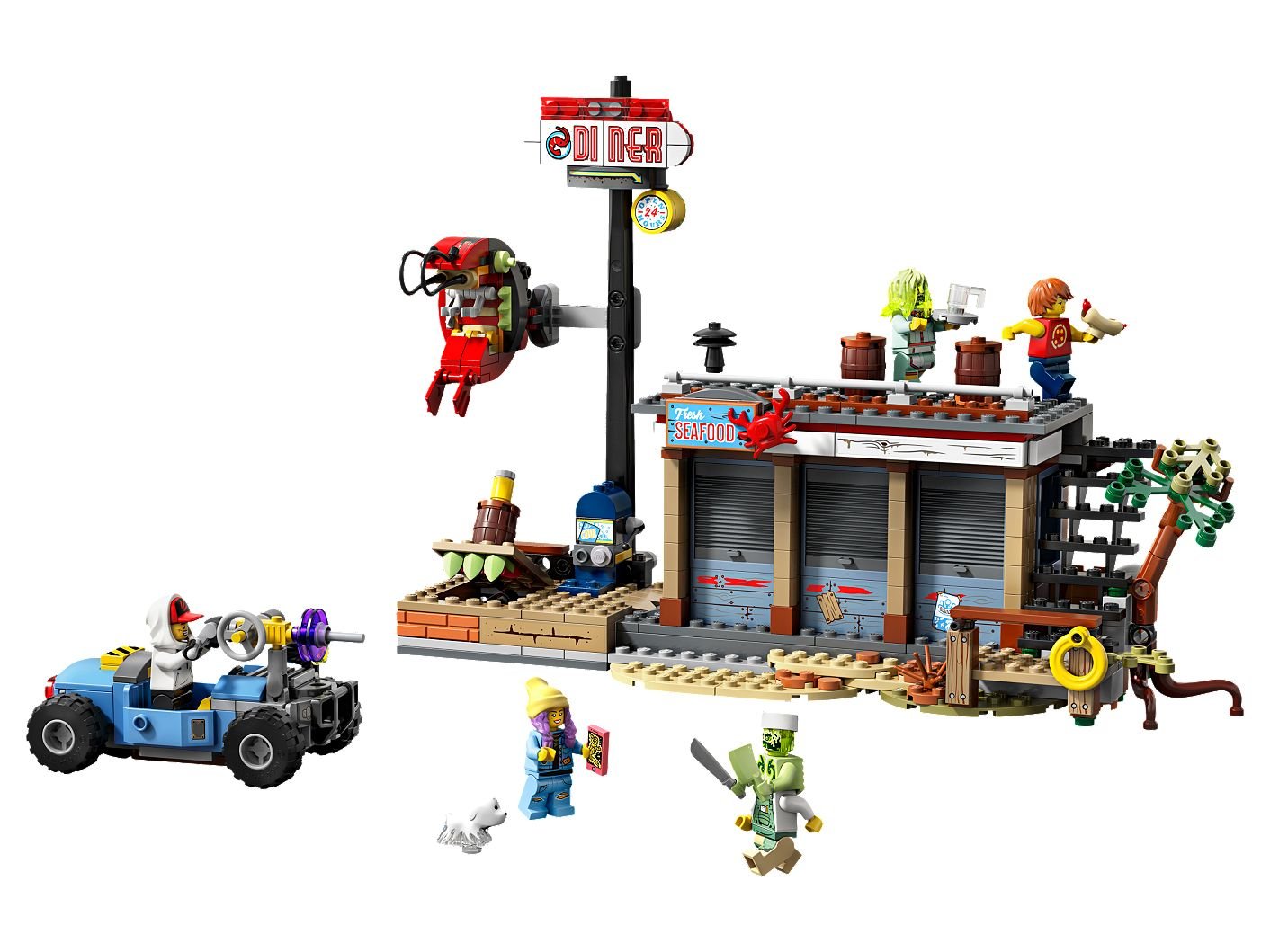 This 579-piece construction set features a go-kart, a highly detailed shrimp shack kitchen, and a large shrimp sign that can pull away from the shack and change from normal to haunted. With a retail price of $49.99, this set also includes 2 hero minifigures with their respective smartphones, a haunted head chef and a server, plus a shack guest figure and a ghost dog figure. 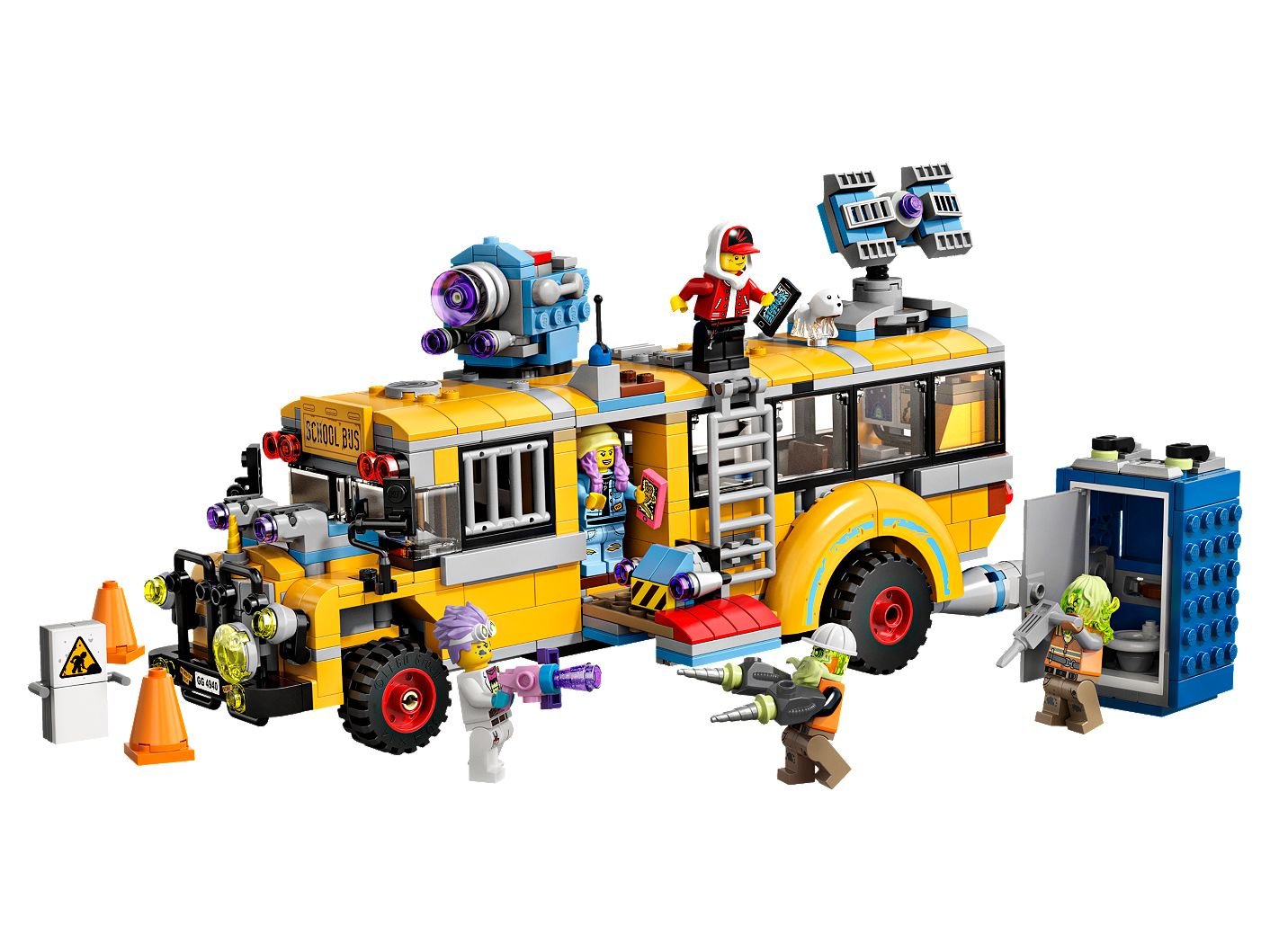 This set’s powered-up school bus features various tech elements, including a pull-out command center, flip-out “de-haunting” toy cannons, and rooftop scanners. This 689-piece set, which has a retail price of $59.99, also includes minifigures of the 2 heroes, tech genius J.B., 2 haunted workers, and a figure of a ghost dog. 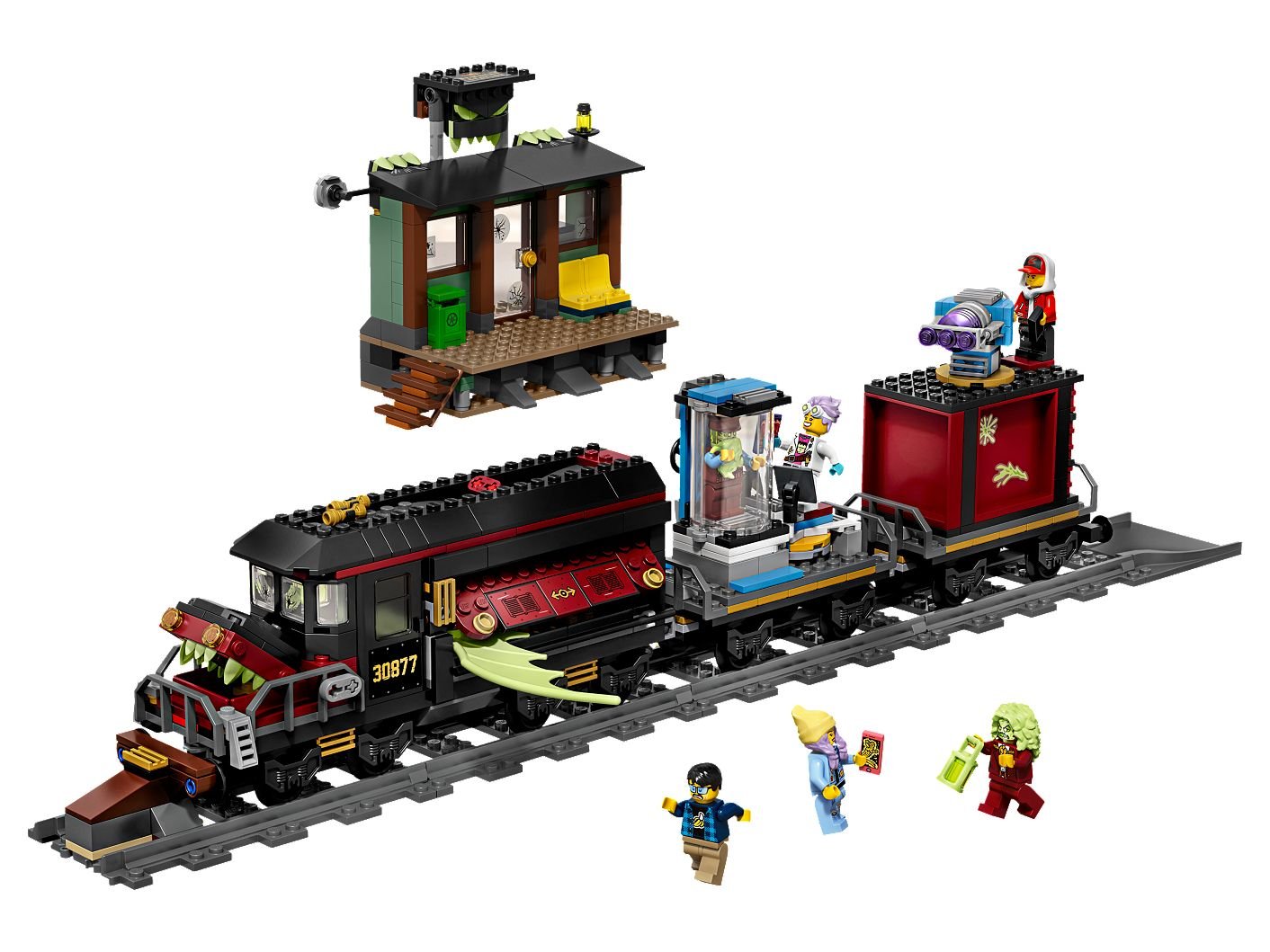 This 698-piece train playset boasts a lot of play-starting features, like ghost wings that fold-out with the flip of a lever and a “de-haunting” cannon to help defeat the ghosts and return the old train station to normal. Priced at $89.99, this set comes with a total of 5 minifigures, including the series heroes Jack and Parker. 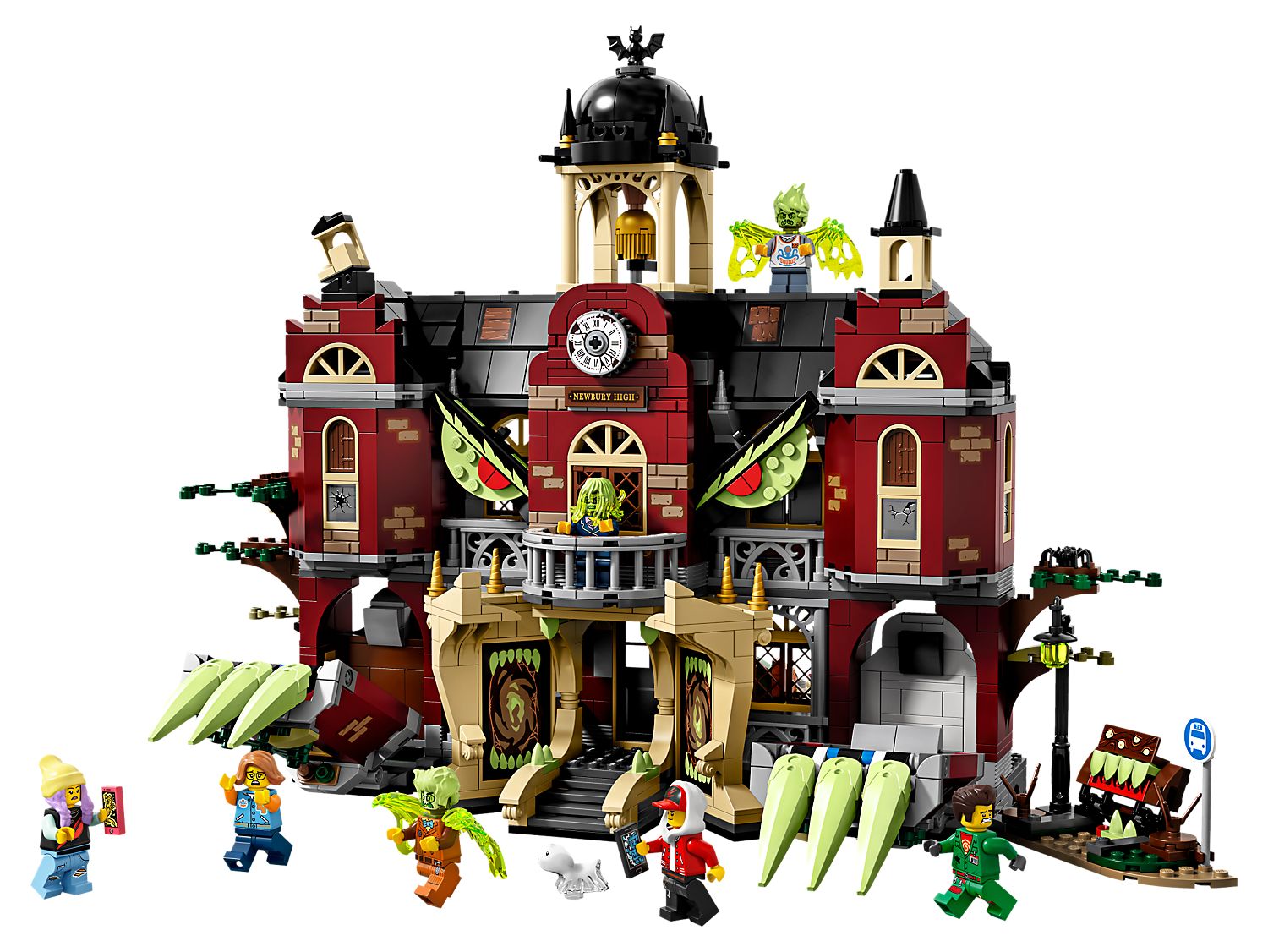 With a price tag of $129.99, this 1,474-piece, spooky-fun school set features a hidden chamber, a bus station out front, a computer lab, a library, a bathroom, a chemistry room, and a bell tower — which all can be changed from normal to haunted. In addition to the minifigures of the 2 heroes and their ghost dog, this set also includes 4 other minifigures.

To learn more about LEGO Hidden Side and its accompanying mobile AR app, watch the video below: