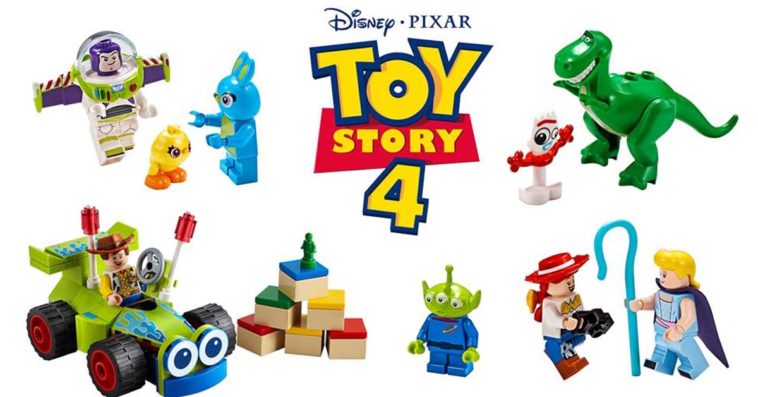 The LEGO Group is releasing a new line of Toy Story-themed building sets ahead of the theatrical release of the fourth installment of the beloved movie franchise.

Revealed at this year’s recently concluded New York Toy Fair, the 4 new Toy Story 4 LEGO sets are all designed for 4 years old and up. With a mix of modular elements such as solid walls and archways, these construction sets help young builders transition from DUPLO bricks to classic LEGO building.

Next is the 178-piece Toy Story 4 RV Vacation set. This $34.99 set consists of an RV, a house front, a barrier gate, and tower signage, along with minifigures of Jessie, Rex, and a toy alien. Completing the cute set are a balloon toy, a green apple, a hotdog sandwich, and a skateboard.

The biggest and the priciest set in the collection is the Buzz & Woody’s Carnival Mania! set. Comprised of a total of 230 LEGO pieces, this $49.99 set features an ice cream stand, bumper cars, a “Terrorantulus” ride, and a carnival shooting game complete with a laser cannon. The set also includes minifigures of Woody, Buzz Lightyear, Bo-Peep, as well as new characters Ducky and Bunny.

Last but definitely not least is the Carnival Thrill Coaster set. With a price tag of $19.99, this 98-piece set features a bug-themed roller coaster, complete with a track, a snack stand, and minifigures of Buzz Lightyear and a toy alien.

All these LEGO sets will be available in April, while Toy Story 4 will open in theaters on June 21st.