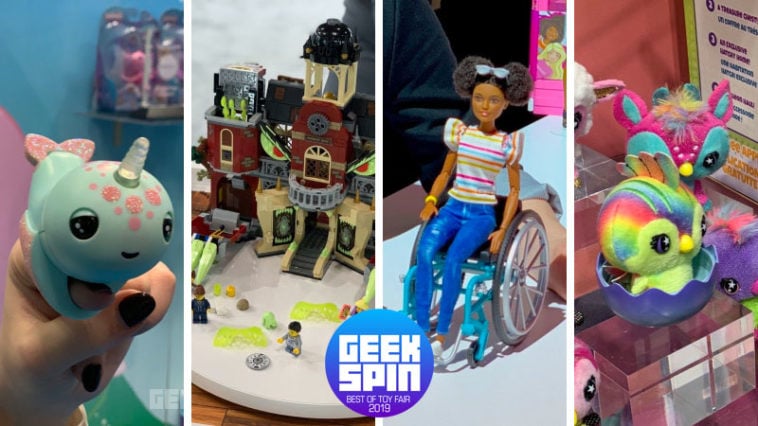 With thousandss of new toys debuting every year, the New York International Toy Fair can be overwhelming. We scoured the show floor to bring you the Best of Toy Fair. All of the following 10 toys are sure to be big hits in 2019.

With Hidden Side, LEGO has combined Augmented Reality with a whole new series of imaginative ghost-themed sets. The playsets are expected to arrive late summer 2019.

Fingerlings were one of the hottest toys of 2018. New for 2019, the Fingerlings are adding adorable Narwahls to the series.

For every kid who has dreamed of being Spider-Man, they have dreamt of shooting his spider webs. With the Hasbro Spider-Man Web Cyclone Blaster, they actually can! Each blaster is expected to retail for $29.99 and it shoots out non-toxic web fluid.

Considering all of the many careers and forms that Barbie has had over the years, it’s kind of crazy to think that it took this long to happen, but better late than never, right? And not only has Mattel introduced a Wheelchair Barbie, but also a Barbie with a prosthetic leg.

Crack one of these eggs open and an adorable plush hatches out of it that works in tandem with a free game app. These little plushes are collectible, adorable, and will cost around $7.99.

Hexbug’s keep expanding to be a lot more than just robotic insects. With Nano Box Sumos, the Hexbugs have been disguised as quirky little cardboard Sumo fighters that vibrate as they wrestle against one another.

When it comes to electric bikes, the Razor UB1 is as compact as it gets. It’s capable of going up to 12mph and will last 40 minutes on a charge.

This massive toy gun takes regular toilet paper and blasts it out as safe bullets. Take that, Nerf!

Yulu’s Snapstars aren’t just dolls, they’re influencers in the making, and that’s the concept behind these news Snapstars.

A STEM-focused educational product, Thames & Kosmos’ Air-Walker teaches kids how to build a robot that is able to scale up walls.