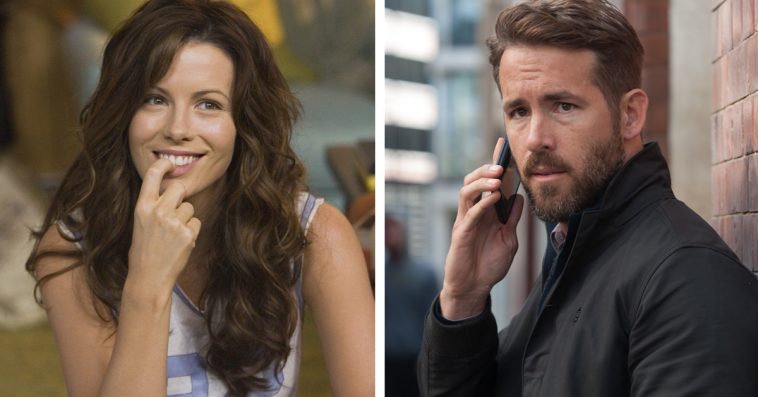 Kate Beckinsale thinks she and Ryan Reynolds are lookalikes.

During her recent appearance on NBC’s The Tonight Show to promote her new film Farming, Beckinsale told host Jimmy Fallon that she and Reynolds are basically doppelgangers.

“I look exactly like Ryan Reynolds, like, in a shocking way,” the Underworld star said, drawing laughter from the audience. “Like, when sometimes I see a bus going by with a poster on it, I think, ‘Damn, I look hot. Oh, wait, that’s not me. Also, I’ve never done that movie. Like, I’ve been at home.’”

Unconvinced by what Beckinsale was saying, Fallon held up a side-by-side photo of Beckinsale and Reynolds and had a closer look at the actors’ faces. When Fallon said that he didn’t really see any resemblance between the two, Beckinsale stressed that she sees herself in the Deadpool actor.

“Obviously, he’s not even like a sort of slightly-girly-boy-bander type. He’s like a big Canadian man [but] I really see myself in him,” Beckinsale said of Reynolds.

Asked if she has already worked with Reynolds, Beckinsale answered: “I can’t be in the same room as him because one of us, I think, would explode, or something would happen. But I have had boyfriends be in the same room as him when I wasn’t there, and [they] feel really compromising or feel way too intimate. They just feel like they sort of know things about his undercarriage that they shouldn’t. But they don’t.”

In a comment on one of Beckinsale’s latest Instagram posts, Reynolds confirmed that he has “never been in the same room with Kate” before joking that he has actually “raised her child while starring in the biggest vampire franchise on earth. So, you do the math.”

Catch me on @fallontonight TONIGHT with @alecbaldwininsta, @thuggerthugger1 and solid proof I know nothing about American Football @nbc #fallontonight #farmingmovie

Beckinsale’s new film Farming is tells the childhood of Adewale Akinnuoye-Agbaje who is given by his Yorubá parents to a white working-class family in London in the 1960s, and grows up to join a white skinhead gang led by a white supremacist. Written and directed by Akinnuoye-Agbaje himself,  the movie opens in U.S. theaters on October 25th.

Reynolds, meanwhile, will be next seen in the vigilante action thriller 6 Underground that is set for a December 13th theatrical release.