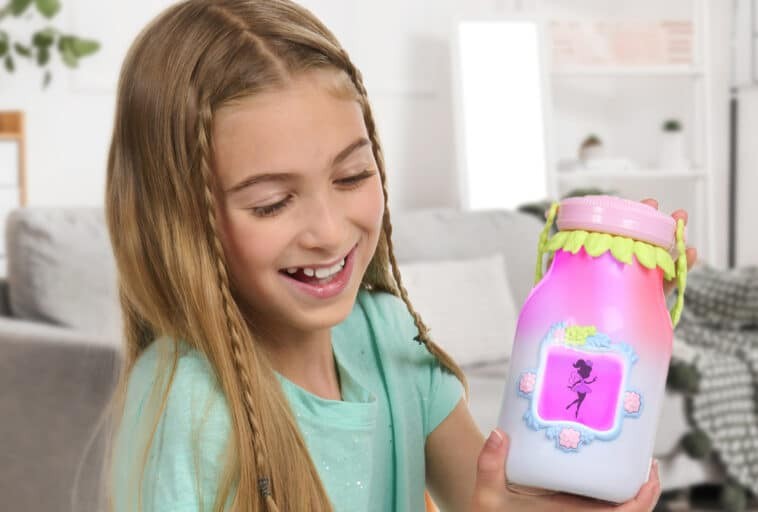 In celebration of International Fairy Day, Fingerlings creator WowWee has announced its newest toy, the Got2Glow Fairy Finder. Children (or adults) who are fans of these magical creatures can pretend to own a fairy with this charming new toy. Available in pink, blue, and an exclusive fuchsia glow-in-the-dark, the Got2Glow Fairy Finder features a magical fairy light show when the heart-shaped lid is opened. It aims to mimic what it would be like catching a fairy before it finds its way home inside the jar.

There are over 100 virtual fairies to collect which will keep kids on the lookout for their next fairy catch. The Got2Glow Fairy Finder is also interactive and will let kids “communicate” with their fairies using the buttons on the screen. Kids can give them hugs, feed them, and say hello to which the fairies will respond.

Get more than one Got2Glow Fairy Finder and link the two lids together for even more fun. The fairies will interact and even transfer from one jar to the other. This encourages kids to grow their fairy family. The caught fairies can also be traded and there will special fairies released on special days or through special codes.

The Got2Glow Fairy Finder works with the Find My Fairy app which also shows all the available fairies that can be caught. There’s also a sort of archive where you can read more about the fairies and learn facts about them.

Pre-orders for the Got2Glow Fairy Finder start today and they retail for $39.99 each. It will also be available in major retailers like Walmart, Target, and Amazon starting in July.