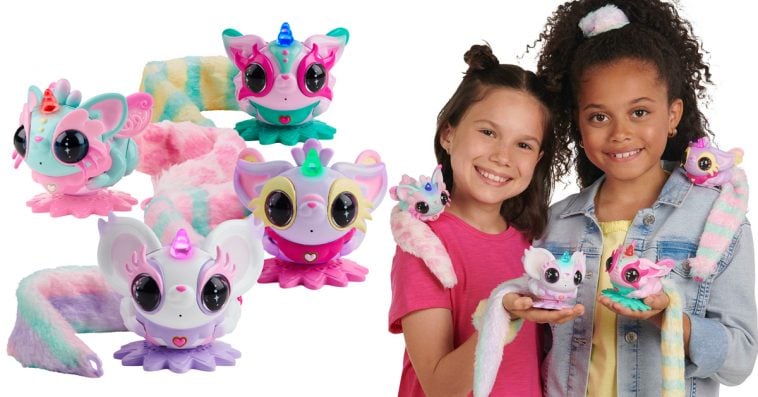 Fingerlings and Lucky Fortune Cookies maker WowWee has just announced the retail launch of its next hit toy.

Called Pixie Belles, these big-eyed, magical-looking interactive pets come in four enchanting characters, namely Esme, Aurora, Layla, and Rosie. While each one has their own signature sound and giggles, all four react to touch and sound through the sensors on their mouth and back. All four also come with three play modes: Nurture, Spin, and Dance. To switch between the three modes, simply press the heart on the Pixie Belles’ chests.

In Nurture Mode, Pixie Belles will display various cute reactions when petted or kissed. They will also reveal their mood through their magical light-up horns. Equipped with the KissTech feature that which uses a unique sensor technology, Pixie Belles will also give their owners a sweet kiss once they detect their cheeks.

Pixie Belles dance and spin on their Magnetic Power Pods, which can be attached to their owners’ clothing and on any magnetic surface. Additionally, the Pixie Belles’ fluffy, colorful tails can also be detached from the Pixie Belle’s bodies and can turn into a bracelet, keychain, or scrunchie. They can be mixed and matched between characters, and even swapped between owners.

A winner of Parents Magazine’s Best Toys of 2019, Pixie Belles are described by Parents Magazine “as a toy that’s unique, engaging, and fun for kids to play with their friends that doesn’t put a huge dent in a parent’s wallet.”

Pixie Belles are now available at major retailers including Walmart and Amazon for $14.99 each.