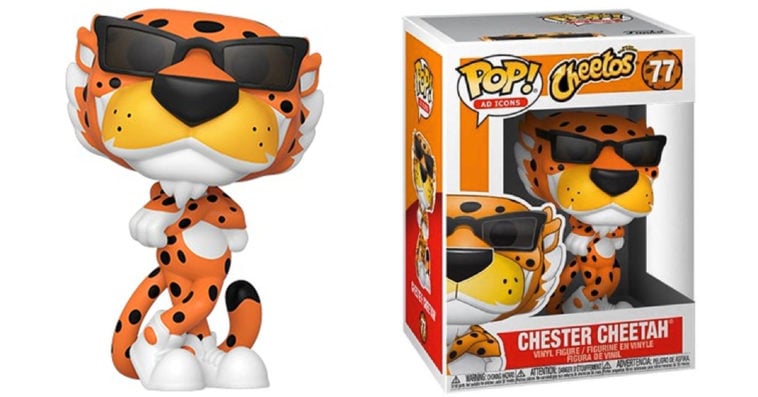 Chester Cheetah, the official mascot of Frito-Lay’s Cheetos, is the latest brand icon to get a Funko Pop! vinyl figure.

Part of Funko’s Ad Icons line, the Cheetos Chester Cheetah Pop! figure depicts the self-described “hip kitty” in one of his coolest pose: crossed arms and crossed legs. Standing approximately 3 3/4-inches tall, the flamin’ hot collectible comes packaged in a window display box and is now available for pre-order at Entertainment Earth for $10.99 with shipping slated for December.

Funko unveiled the Cheetos Chester Cheetah Pop! figure on August 30th — just four days after it was reported that Eva Longoria will direct Flamin’ Hot, the Fox Searchlight biopic about Richard Montanez, the creator of the spicy Flamin’ Hot Cheetos snack. Richard is a son of a Mexican immigrant and was a janitor at Frito-Lay when he came up with the idea for Flamin’ Hot Cheetos, which influenced future ethnic products and the first Frito-Lay Hispanic marketing team.

Charlie St. Cloud and October Sky scribe Lewis Colick wrote the script for the movie that will be produced by DeVon Franklin under his Franklin Entertainment label, which is currently under a production deal at Fox.

The Coca-Colar Polar Bear Pop! figure, meanwhile, shows a smiling polar bear holding a bottle of Coca-Cola in his left hand while in sitting position.

Both figures are available for pre-order at Entertainment Earth for $10.99 with shipping slated for November.