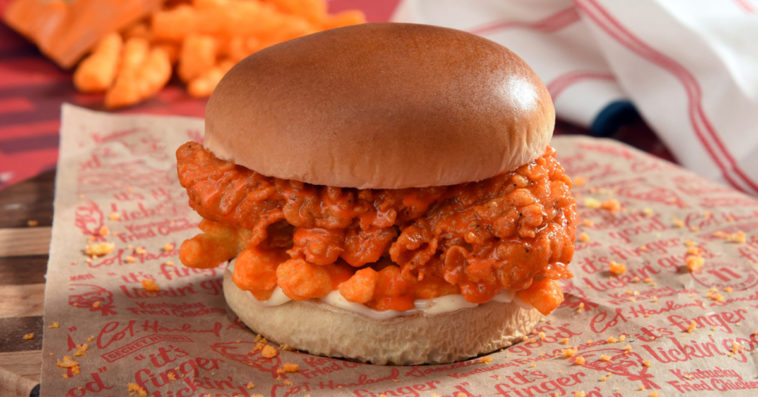 Roughly five months after testing KFC Cheetos Sandwich at select locations in the U.S., KFC is now bringing its cheesiest chicken sandwich to date to all of its stores nationwide.

KFC and Cheetos announced on Thursday that the KFC Cheetos Sandwich will be available at all KFC restaurants across the country starting July 1st.

As previously reported, KFC doesn’t just add some Cheetos to its regular chicken sandwich to create its latest novelty menu item.  According to the fast food restaurant chain, KFC Cheetos Sandwich is “made by coating a juicy, hand-breaded Extra Crispy chicken filet with special Cheetos sauce and placing it on a toasted bun with mayo and a layer of crunchy Cheetos.” Since the sandwich doesn’t include any kind of vegetable, its patty is mostly colored orange.

“Both KFC and Cheetos have dedicated fan bases loyal to each new creation,” a spokesperson for the fast food chain said in a statement back in January. “It only made sense to merge these two iconic brands together to provide an irresistible and flavorful sandwich that gives the best of both worlds.”

Earlier this year, KFC Cheetos Sandwich was tested at select restaurants throughout Greensboro, North Carolina; Raleigh, North Carolina; Roanoke, Virginia; Richmond, Virginia; and Greenville, Georgia. Apparently, the results of the testing phase had been very positive, and that’s why KFC has just announced a nationwide rollout for its one of a kind sandwich.

As KFC fans know, this isn’t the first time the fast food chain has come up with a novelty sandwich. Just last year, KFC started to offer the Pickle Fried Chicken and the limited-edition Chicken & Waffles.