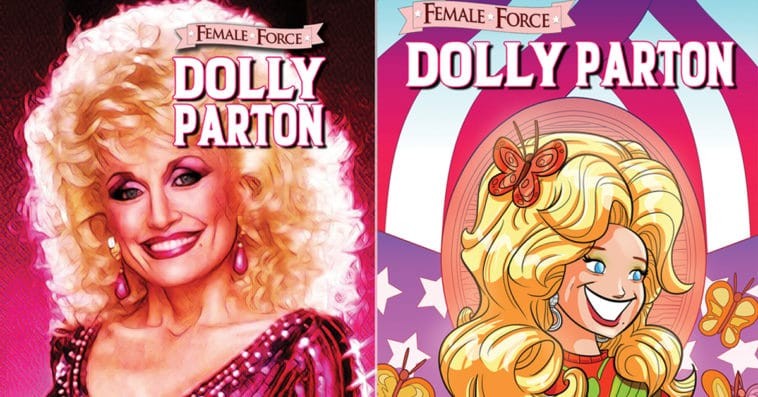 Country music star Dolly Parton is the latest inspirational female figure to star in a biographical comic book from TidalWave Comics. The comic book is part of the publisher’s Female Force series that honors women who make an impact around the world.

Written by Michael Frizell and art by Ramon Salas, Female Force: Dolly Parton is a 22-page comic book that will tell Parton’s empowering journey to stardom and highlight her status as a powerhouse singer, songwriter, multi-instrumentalist, record producer, actress, author, businesswoman, and philanthropist.

“Writing about Dolly was a joy,” Frizell, an educator at Missouri State University in Springfield, said in a statement. “I’m thrilled with the expressive way the artist visualized the pages. The book feels timeless.  Her creativity, philanthropy, and humanity are legendary.”

“We’ve found a niche with our bio comics,” said TidalWave publisher Darren G.  Davis. “Our success with this comic shows that there is a much wider audience for sequential storytelling than many have thought. These readers are simply looking for something other than superheroes. With our bio comics, we strive to bring these new readers evenhanded, well-researched looks at some of their favorite celebrities.”

Female Force: Dolly Parton will be officially released on March 31st, but is now available for preorder on Amazon. The paperback edition of the comic book has a price tag of $6.99, while its hardcover edition, which features a cover art by famed comic book artist Dave Ryan, will retail for $19.99. There’s also a Kindle version that costs $3.99.