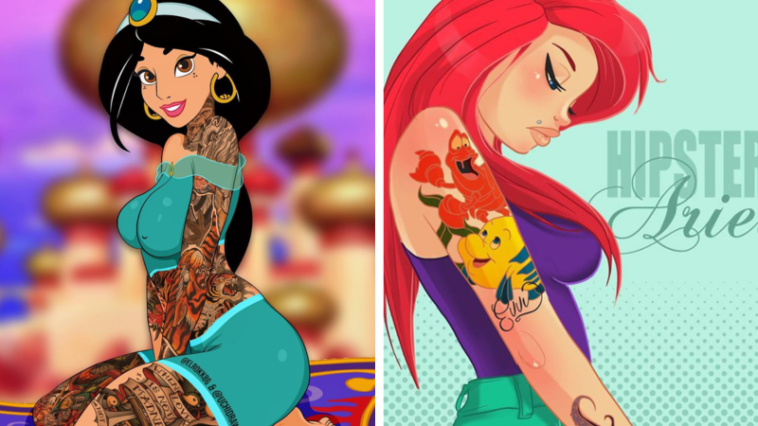 Though people are now getting more open-minded about tattoos and piercings, these forms of body art still hold a negative stigma, especially in the Western world. For instance, there is a false notion that people with body tattoos and piercings have all been incarcerated. Some individuals with such body art are also being mislabeled as promiscuous, attention seekers, and even masochists.

Because of this strong prejudice against people with tattoos and piercings, it isn’t that surprising that Disney hasn’t introduced a heavily tattooed and pierced princess yet. Though Pocahontas has a red ink around her right bicep, that tattoo is a symbolic tribal tattoo, which is arguably more accepted by the public than the purely decorative ones.

While Disney has helped destigmatize tattoos with the introduction of Dwayne Johnson’s heavily tatted character Maui in the 2016 film Moana, it remains unclear if or when the studio will introduce a Disney Princess with excessive tattoos and piercings.

Luckily, fans don’t have to wait for Disney to make the big move, as there are a number of talented digital artists that have already reimagined the beloved Disney Princesses as tattoo and piercing-loving gals. Browse the slideshow above to see some of the amazing fan art by Italian artist Emmanuel Viola, Malaysian graphic designer Ephrem Rokk, and more.

Ariel expands her artistic range by plunging into the world of tattoos and piercings. Illustrated by artist Emmanuel Viola, this emo-looking reimagining of the youngest daughter of King Triton has several under the sea-themed inks, including Flounder and Sebastian tattoos as well as a tiny anchor tattoo just below her left eye. In addition to a standard lobe piercing, Ariel also sports a pearl-like septum piercing that makes her overall look much cooler.

Aurora, who was cursed to sleep forever after pricking her finger on a spinning wheel’s spindle, ironically ended up as a tattoo artist in this artwork by Emmanuel Viola. Like most tattoo artists, this modern-day version of Briar Rose also has inks of her own. Her right forearm is decorated with a tattoo of Maleficent, while her left forearm shows an ink of the evil fairy’s pet raven, Diaval. Aurora’s edgy appearance is made even more badass with her two orbital ear piercings, a stretched lobe piercing, and a septum piercing.

Cinderella is one glamorous gal in this artwork by Emmanuel Viola. Flaunting a pair of bird tattoos on her collarbones and arm tattoos depicting her iconic shoes and her mouse friend Gus, Cinderella looks extra alluring in her sparkling silvery-blue ball gown. As if that’s not enough to attract the attention of everyone around her, the former scullery maid is also wearing a stylish pair of eyeglasses that surprisingly goes well with her upper lip piercing and long barbell earring.

Unveiled ahead of the 2019 live-action adaptation of Disney’s Aladdin, this majestic artwork by illustrators Ephrem Rokk and Uchidrawing reimagines Jasmine as a heavily tattooed royalty. Riding the magic carpet, Jasmine seems to be roaming around the Kingdom of Agrabah to flaunt her intricate tattoos that cover most of her body. A closer look at her inks will reveal images of roses, cannabis, her pet tiger Rajah, and what seems to be a furious Abu.

The Princess of Agrabah traded her huge sapphire-centered headband and her thick gold necklace with small nose and lip piercings for a minimalist look. While artist Emmanuel Viola gave this version of Jasmine a low-key set of face accessories, Viola went big on the character’s body tattoos. As seen in the fan art, Jasmine has a Rajah ink on her neck, and Genie and the magic lamp tattoos on her left arm.

The youngest Disney Princess is all-grown up in this piece of pin-up art by Emmanuel Viola. Wearing a strapless corset top, Snow White shows off her huge heart chest tattoo and a larger Dopey tattoo on her left arm. The Fairest One of All also displays an anti-eyebrow facial piercing that match her studded pair of hand gloves.

This second version of Emmanuel Viola’s Cinderella fan art reveals a portion of the Disney Princess’ pocket watch tattoo. The artwork also gives a glimpse at Cinderella’s quirky side as she makes a pretty silly pose for a selfie.

Created by Emmanuel Viola, this hipster version of Ariel has an undeniable love for body art. In addition to her upper lip piercing, the Princess of Atlantica also has colorful arm tattoos of Flounder, Sebastian, and what appears to be some of Ursula’s octopus limbs.

Elsa is giving off some serious swag in this yet another incredible fan art by Emmanuel Viola. Sporting a vertical labret piercing and circular barbell piercings on her left eyebrow and ear, this hipster version of the Snow Queen has a snowflake tattoo on her right shoulder as well as Olaf and Anna tattoos on her left arm. She has also dyed her platinum blonde hair green and blue to achieve a much edgier look.

Though not a member of the Disney Princess lineup, Princess Leia is technically a Disney Princess as Disney owns the Star Wars franchise following its acquisition of Lucasfilm in 2012. Also illustrated by the Emmanuel Viola, this artwork reimagines the Princess of Alderaan as a laid-back hipster with multiple facial piercings. Looking carefree in her rugged denim shorts and sweetheart tube top, Princess Leia flaunts her Rebel Alliance shoulder tattoo while casually blowing a bubble-gum bubble.

Ariel is showing off her voluptuous body in this sultry artwork by Emmanuel Viola. In addition to her lovely pair of Venus dimples, Ariel’s back and arm tattoos also make her rear side look so much sexier. Also adding to her overall allure is her edgy Skrillex haircut and cool anti-eyebrow piercing.

Also illustrated by Emmanuel Viola, this fan art shows a foxy version of Belle. With her eyes closed and her left arm raised, the gothic princess seems to be seducing the Beast with the help of her lovely piercings and tattoos. Belle’s got multiple stud piercings on her right ear, angel bites above her lips, and a nostril piercing. She also Lumiere and Beast tattoos on her right arm, and a Chip tattoo on the left.

What did Belle do? Wearing a sexy see-through version of her signature yellow ball gown, Belle reluctantly poses for a mug shot that not only reveal her curvy physique but also her many intricate tattoos. Mostly Beauty and the Beast-themed, her inks include images of Lumière, Chip Potts, and the iconic Enchanted Rose.

Wearing their sexiest lingerie, Ariel, Alice, and Snow White hit the beach to hang out. Though their pieces of nightwear are not seaside-appropriate, onlookers would probably more interested in their daring body piercings and tattoos than the outfits they’re wearing.

The bibliophile Belle must have read too much about goths that she decided to be one. While her neon pink hair is truly magnetizing, it is her unique collection of tattoos that make spectators give her a second look. In addition to her huge and elaborate tattoos of skull, anchor, crown, and pocket watch, Belle also has nose and chin piercings that complete her gothic look.

Always the inquisitive one, Alice is again in deep thought in this cute fan art. While we can’t exactly tell what’s going on in her mind, it’s likely that she’s thinking what body art she should get next. So far, in addition to a number of facial piercings she has, Alice also sports several tattoos that are mostly based on the characters and things she encountered in Wonderland.

Unless it isn’t obvious yet, Belle is a punk princess in this piece of digital art. Aside from having dragon tattoos on both of her arms, Belle is also rocking nose and upper lip piercings. Wearing a tank top that says “Punk’s not dead — it just went pop,” Belle is clearly proud to be identified as a hardcore punk.

Ariel looks surprisingly great as a goth in this illustration by Heavenlee. For one, the mermaid’s bright red hair looks more vivid than the usual with her pitch-black studded corset with fishnet sleeves. Her facial piercings and ornate red rose body tattoos also help her achieve her most alluring look ever.

Tinker Bell colored her iconic blonde hair pink and traded her signature green dress with a darker one to achieve a gothic look. Though her tiny body is now covered with lots of flower and butterfly tattoos, she seems to be the same sassy fairy that Disney fans have come to love since the 1953 film Peter Pan.

This gothic reimagining of Alice looks a little bit cunning. With her eyes rolled up, it seems that young girl has something up her sleeves. Literally though, it appears that there’s nothing but tattoos underneath her sleeves. Some of her visible inks include a highly decorated skull, spider webs, birds, flowers, and lots of diamonds.

Created by digital artist Miss Cherry Martini, this artwork features Ariel as a tattoo- and piercing-loving geek chic. Rocking matching decorative tattoos on her forehead and neck, the Princess of Atlantica manages to project a feisty look with the help of her spunky facial piercings.

This emo version of Ariel has roses and butterfly tattoos on her right arm. Her left arm, meanwhile, is decorated with inks that depict stars, skull, and cross, just to name a few. Though her nose piercing and stretched ear lobe add coolness to her overall vibe, the sad look in her eyes indicates that something is bothering her.

Though still dressed in her signature court dress, this dragon-tattooed Snow White seems to be a member of a gang. Wearing a large gold bling that says “Trust No Bitch,” it seems that this version of the Fairest One of All is not as trusting as she is in the movie.

Illustrated by digital artist berserk7, this punk Ariel sports multiple facial piercings and several body tattoos on her neck, shoulders, chest, and arms. Some of her striking inks include skull and crossbones, stars, thunders, jellyfishes, and ships.

Another collab from Ephrem Rokk and Uchidrawing, this pin-up style artwork features heavily tattooed versions of Cinderella and Snow White. Seemingly posing in front of a camera, the two Disney Princesses proudly show off their elaborate body inks in their skimpiest outfits ever. Most of Cinderella’s tattoos depict animals like birds, snakes, and rats, while majority of Snow White’s inks is vice-related items such as playing cards.

From a single tribal tattoo on her right bicep, Pocahontas now has most of her body decorated with inks. Co-created by Ephrem Rokk and Uchidrawing, this detailed fan art shows Pocahontas with some of her body tattoos fully exposed. Pocahontas’ standout inks feature images of her pet raccoon Meeko, a woman wearing a Tiger headdress, and the word “wild” spelled out on her left forearm.

With tattoos all over her face and body, this version of Ariel is basically a living canvas. Co-created by Ephrem Rokk and BossBabyGal, this reimagining of the popular redhead mermaid has a skull tattoo on the left side of her forehead, a tattoo of Prince Eric’s face on her right arm, and a tattoo of jail bars on her neck, among many others.

Snow White is undeniably high in this fan art by Ephrem Rokk. Some of her most eye-catching inks include a set of hearts tattoo on her right cheek and dragon and snake tattoos on both of her arms.