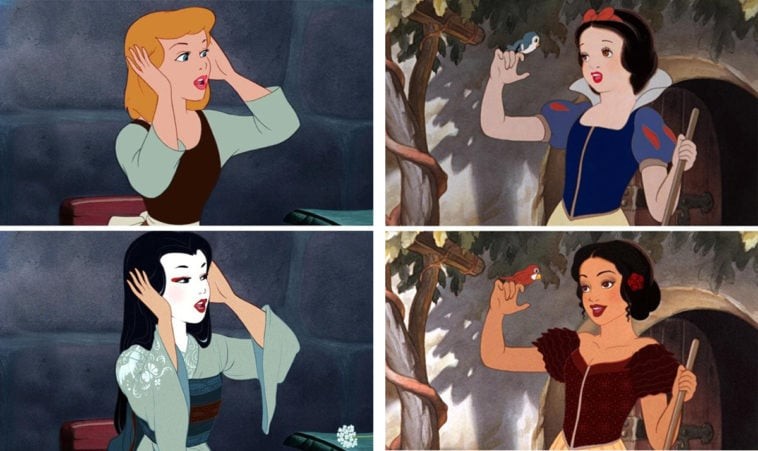 The Disney Princess lineup has started to become culturally diverse since the introduction of Jasmine in the 1992 animated classic Aladdin. Following her debut, more princesses of color have been created, including Pocahontas in 1995, Mulan in 1998, Tiana in 2009, and Moana in 2016. But if you’re one of those fans who want to see more diversity in the beloved franchise, then this series of fan art featuring racebent Disney Princesses will delight you. Created by talented artist TT Bret of the tumblr blog Let There Be Doodles, the following digital edits show what Disney Princesses would look like if they were different races.

Ariel is transformed into an Indian princess in this amazing artwork by TT Bret. This Hindu version of the Little Mermaid character wears a maang tikka with gold chain and purple seashell pendant. She also has a red bindi on her forehead, a nose ring, and intricate tattoos on her hand.

Disney’s Aurora, who is believed to be from Germany, has fair skin, blond hair, and violet eyes, but in this fan art, the Sleeping Beauty character is converted into a Jamaican beauty with dark brown skin, traditional dreadlocks, and orange eyes.

In the 1991 film Beauty and the Beast, Belle is from a small French village. But in this artwork by TT Bret, the character appears to be from the Middle East-North Africa region, which has the highest population of Muslims in the world. As a Muslim woman, Belle is wearing a hijab, a traditional head covering worn by some Muslim women in public. While we’re not sure what ethnic group she belongs to, Muslim Belle has darker skin and hair, as well as thicker eyebrows than Disney’s version of the princess.

Jasmine is the first West Asian and non-European member of the Disney Princes lineup, and while she’s already beautiful as she is, TT Bret decided to turn her into a Kenyan princess with dark brown skin and curly short hair. As a Maasai woman, Jasmine is wearing the ethnic group’s traditional face paint, as well as native beaded necklaces and a colorful headband. TT Bret also transformed Jasmine’s pet tiger Rajah into an East African lion, which is the national animal of Kenya.

Merida debuted as Disney’s first Scottish princess in the 2012 movie Brave. The headstrong Princess of DunBroch is well known for her red curly hair, but in TT Bret’s Brazilian version of the character, Merida’s locks are much darker and are secured with a stylish red headband. This South American incarnation of Merida also has hazel eyes and tanned skin.

In her 1995 eponymous film, Pocahontas is the daughter of a Native American Powhatan chief. But in this fan edit by TT Bret, the Disney character is turned into a Pacific Islander with wider eyes, broader nose, and long wavy hair. Completing her tropical look is a red hibiscus flower on her ear and a necklace with large round beads.

TT Bret transformed German princess Rapunzel into a Mexican beauty with brown eyes, darker skin and hair, larger nose, and plumper lips. Instead of the character’s signature purple dress called dirndl, this version of the Princess of Corona is wearing an embroidered peasant blouse, which is a common attire among Mexican women. Matching her floral top are real flowers adorning her hair, which include Mexico’s national flower, dahlia.

Disney’s Snow White is a German princess with pale skin, chubby cheeks, short wavy black hair, and brown eyes. TT Bret’s version of the character, meanwhile, is a Latina stunner with olive skin, prominent jawline and cheekbones, and darker eyes. Unlike the original character who wears a court dress, Latina Snow White is rocking a dark red off-the-shoulder dress with ruffles on the sleeves.

Tiana, the first African-American Disney princess, is turned into an East Asian royalty with fairer skin, narrower eyes, smaller nose, and thinner lips. The character, who is originally from New Orleans, now wears a pink backless dress featuring what appears to be a Mandarin collar.

Reimagined as an Inuit woman, Anna protects herself from the chilly weather by wearing multiple layers of thick clothing, including a winter coat trimmed in fur and a pair of mittens. Like the Inuit people living in far North Eastern Asia and the American Subarctic, this version of Anna has brown skin. And though Inuit Anna doesn’t have any freckles, she has rosy cheeks like the original Frozen character.

Jane is an Englishwoman in the 1999 animated film Tarzan. But in this fan edit by TT Bret, the animal researcher/artist is reimagined as a Korean woman with darker hair and eyes, fairer skin, and slightly fuller lips. This Asian version of Jane has her hair styled in a braided bun and wears a traditional Korean dress called hanbok.

In the 2001 film Atlantis: The Lost Empire, Kida belongs to the fictional race of Atlanteans. But in this artwork, the Queen of Atlantis is reimagined as a Māori woman. As a member of the indigenous Polynesian tribe, Kida has a traditional female chin tattoo called the moko kauae. Māori women consider these tattoos as a physical manifestation of their true identity. It is believed that every Māori woman wears a moko on the inside, close to their heart; and when they are ready, the tattoo artist simply brings it out to the surface.