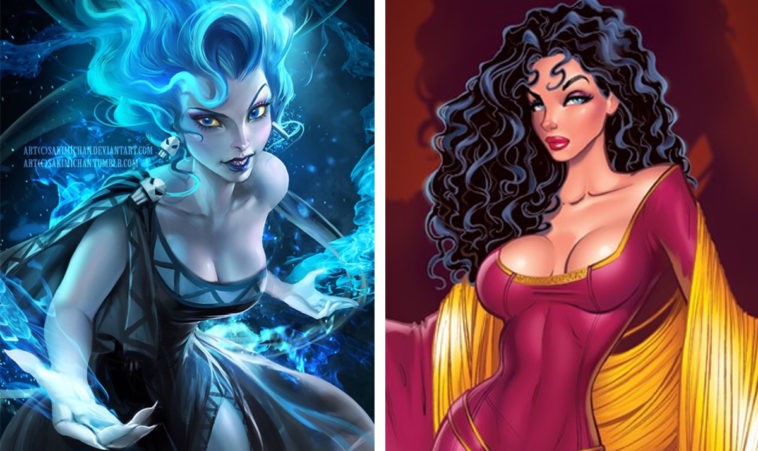 Disney movies would be totally boring without its iconic villains. And if we’re being completely honest, a lot of us find some of the antagonists more lovable than the lead characters, as the former usually get the most fabulous outfits, the coolest songs, and the most memorable lines. Some fans love Disney villains so much that they used their imagination and drawing skills to turn them into princesses, and the results prove that they, too, can star in their own feature films. Check out some of those amazing artworks in the slideshow below:

Table of Contents show
#1 Jafar from Aladdin
#2 Gaston from Beauty and the Beast
#3 Lady Tremaine from Cinderella
#4 Shan Yu from Mulan
#5 Maleficent from Sleeping Beauty
#6 The Evil Queen from Snow White
#7 Mother Gother from Tangled
#8 Ursula from The Little Mermaid
#9 Dr. Facilier from The Princess and the Frog
#10 Hans from Frozen
#11 Queen of Hearts from Alice in Wonderland
#12 Hades from Hercules
#13 Captain Hook from Peter Pan
#14 Cruella from 101 Dalmatians
#15 Stromboli from Pinocchio

#2 Gaston from Beauty and the Beast

Taiwanese artist WortCat turned Gaston from Beauty and the Beast into a charismatic princess that seemingly loves attention. The genderbent character wears a strapless tight-fitting red dress with gold trims and a brown belt, inspired by one of the villain’s outfits in the 1991 animated movie. Princess Gaston completes her look with gold hand gloves and red rose earrings, which appear to be a nod to the film’s mystical flower, The Enchanted Rose.

Illustrated by American artist SheWolfofMN, this princess version of Lady Tremaine has a snobby look on her face, which is true to the villain’s character in the 1950 animated classic Cinderella. Unlike the original who is often seen in high-collared outfits, Princess Tremaine wears a fuchsia pink dress that reveals portions of her shoulders and chest. Though not heart-shaped like the original’s, Princess Tremaine’s locks are also pulled back, giving her a sophisticated appearance.

Reimagined by Italian artist mabychan, this princess version of Shan Yu has muscular build, yellow eyes, and long fingernails just like the original villain in the 1998 animated film Mulan. Wearing a high-slit tunic dress on top of a pair of trousers, Princess Shan Yu makes her multi-layered wardrobe extra comfy with a 2-in-1 head band and shawl that extends to her back. Shan Yu’s pet falcon, Hayabusa, is also included in the artwork to help people recognize the genderbent character easily.

American artist moonprincess22 kept Maleficent’s green skin from the 1959 movie Sleeping Beauty in this reimagining of the evil fairy. The illustrator, however, got rid of the villain’s horns and fitted her version of the character with a strapless dress inspired by the original’s black and purple robe. Completing Princess Maleficent’s outfit are matching gold necklace, gold earrings, and a gold band across her forehead, which all give her a majestic look.

#6 The Evil Queen from Snow White

Artist Kawaiibrit recreated The Evil Queen from Snow White and the Seven Dwarfs as a princess, and the sour look on the de-aged character’s face suggests that she may be just as wicked as the original. Wearing the villain’s signature purple gown with long sleeves and a red rope belt tied around her waist, this reimagining of the character also has a long black cloak that appears to be part of the cowl. The most noticeable difference between the two is that this youthful version of the Evil Queen doesn’t wear a balaclava, leaving her face and short hair exposed.

If Mother Gothel didn’t die at the end of the 2010 film Tangled and continued to use the power of the Sundrop Flower in Rapunzel’s hair, then this is what she would probably look like. Created by American artist Elias-Chatzoudis, this princess version of Mother Gothel has a very sexy body with long curly black hair. To suit Princess Gothel’s youthful appearance, the artist dressed her in a more provocative version of the original’s crimson-red Renaissance-era dress.

#8 Ursula from The Little Mermaid

In the 1989 movie The Little Mermaid, Ursula is a morbidly obese cecaelia, but in this fan art, the villain is recreated with a voluptuous upper body with long flowing white hair, striking blue eyes, and red lips. Just like the original villain, Princess Ursula also wears a pair of purple coral shell earrings and a necklace with a gold nautilus shell as pendant.

#9 Dr. Facilier from The Princess and the Frog

Another artwork by Italian artist mabychan, this princess version of Dr. Facilier from the 2009 animated film The Princess and the Frog is rocking an outfit inspired by the original’s sharp and sleek attire. While mabychan kept the villain’s dark maroon undertaker tailcoat, the artist turned the character’s cropped vest and pants into a dress with a red cummerbund. Completing Princess Facilier’s getup are a top hat with a skull design and a feather ornament; necklace with two crocodile teeth; cane with a globe on top; and a voodoo talisman that appears to be the source of her powers.

This princess version of Prince Hans of the Southern Isles is illustrated in three different outfits inspired by the original character’s attires from the 2013 film Frozen. Created by Brazilian artist juliajm15, the genderbent character looks like a mashup of Arendelle sisters Elsa and Anna. Princess Hans has long brown hair styled in a braid similar to Elsa’s, and specks of freckles on her cheeks that are as noticeable as that of Anna’s.

#11 Queen of Hearts from Alice in Wonderland

Reimagined as a princess, this de-aged version of the Queen of Hearts looks more regal than the original character from the 1951 film Alice in Wonderland. This slender depiction of the villain wears a red and black gown similar to the original’s, but is illustrated in a realistic style with more intricate details. She accessorizes her look with a mini crown, a pair of round gold earrings, and a black choker with a heart design. Unlike the original who has her black hair tied in the back with a red band, this depiction of the character simply has her wavy locks down.

Created by Canadian artist sakimichan, this female version of Hades is literally and figuratively hot. Wearing a black robe similar to the original character’s outfit from the 1997 film Hercules, the voluptuous genderbent God of the Underworld is ready to attack using her fire power. Despite her fierce blue eyes and sharp, pointy teeth, this princess depiction of Hades is still very pleasing to look at.

Captain Hook was transformed into an adorable princess in this genderbending artwork featuring the character in two different outfits. Though the villain’s signature hand hook is nowhere to be found, the artist sticks with the original character’s red color scheme. In the first illustration, Princess Hook wears a red knee-length dress adorned with gold ribbons on the waist. The second image, meanwhile, features Princess Hook sporting a red ball gown with gold tassels. Completing her extravagant attire is the villain’s large crimson hat with a huge lavender feather stuck in it.

This princess version of Cruella de Vil looks chic and elegant in her body-hugging attire inspired by the original character’s outfit from the 1996 film 101 Dalmatians. Reimagined by Mexican artist madmoiselleclau, this younger depiction of the villain wears a black dress with a floral lace design at the bottom and a polka-dot dalmatian fur on top. Her high fashion appearance also includes matching red opera gloves and shoes, and a necklace with round turquoise pendant.

Reimagined as a princess by Canadian artist blastedgoose, this genderbent depiction of Stromboli has a huge smile on her face as she controls two string puppets in front of an audience. Dressed in a tight-fitting mini dress with vest inspired by the Peter Pan villain’s attire, Princess Stromboli wears her hair in two pigtails for a more youthful appearance.