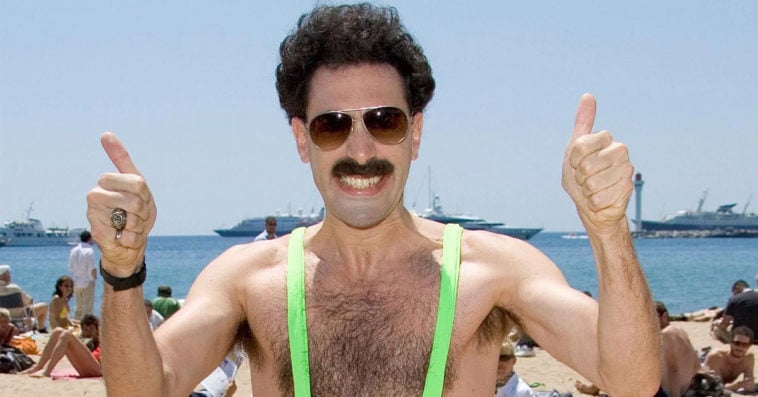 Sacha Baron Cohen has filmed a sequel to his 2006 film Borat! Cultural Learnings of America for Make Benefit Glorious Nation of Kazakhstan, and it will be released digitally before the elections.

Though the film was shot and produced in secret just as coronavirus shooting restrictions were eased, Cohen’s appearances in the news over the last several months led some fans to speculate that he was cooking something up.

Cohen made headlines at the end of June for crashing March for Our Rights 3 in Olympia, Washington and convincing the crowd to sing a racist song with him. The rally was organized by the Washington Three Percenters, a far-right militia group known for its gun advocacy. Cohen appeared in the event dressed in overalls and a fake beard.

Then the following month, former New York mayor Rudy Giuliani revealed to The New York Post that Cohen ambushed his interview at the Mark Hotel in New York City on July 7th. Giuliani thought that he was going to be interviewed about the White House’s response to the COVID-19 pandemic, but in the middle of his interview with a female journalist, Cohen appeared out of nowhere “wearing a crazy” outfit comprised of “a pink bikini, with lace, underneath a translucent mesh top.”

Plot details about Borat 2 are scarce, but sources said the sequel finds Cohen’s Kazakh journalist Borat Sagdiyev “thinking he’s a big movie star after the success of the original 2006 film … so he’s [now] trying to hide from the public by pretending to be someone else, and starts meeting and interviewing people incognito.”

The original movie was a blockbuster hit, grossing over $260 million worldwide against a production budget of just $18 million. Cohen won the Golden Globe for Best Actor in a Motion Picture Comedy or Musical for his performance in the movie, which also went on to receive an Oscar nod for Best Adapted Screenplay at the 79th Academy Awards.