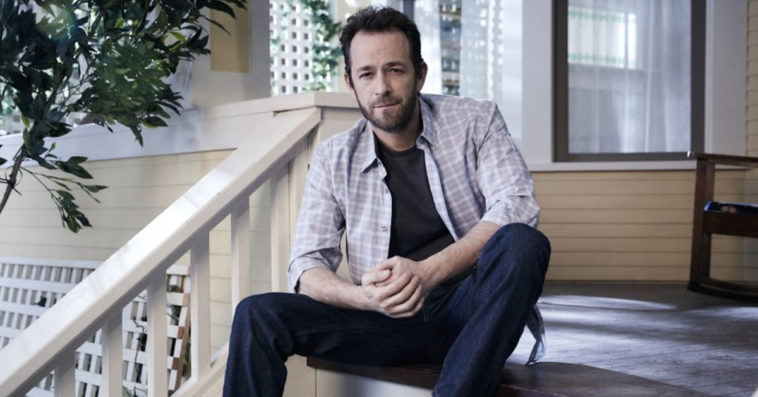 Luke Perry, who rose to prominence for playing Dylan McKay on Beverly Hills, 90210, has passed away after suffering a massive stroke. He was 52.

Perry died on the morning of March 4th at St. Joseph’s Hospital in Burbank, California. “He was surrounded by his children Jack and Sophie, (fiancee) Wendy Madison Bauer, ex-wife Minnie Sharp, mother Ann Bennett, step-father Steve Bennett, brother Tom Perry, sister Amy Coder, and other close family and friends,” the actor’s representative Arnold Robinson said in a statement to USA Today. “The family appreciates the outpouring of support and prayers that have been extended to Luke from around the world, and respectfully request privacy in this time of great mourning. No further details will be released at this time.”

Perry had the stroke while at his Sherman Oaks, California home last February 27th. According to TMZ, the actor was still responsive and talking when EMTs arrived at his house. In the hope of giving his brain a fighting chance to recover from the trauma of the stroke, doctors had reportedly sedated Perry, but apparently, the damage was too extensive.

Born Coy Luther Perry III in Mansfield, Ohio, and raised in the small community of Fredericktown, Perry moved to Los Angeles to pursue acting soon after graduating from high school. While trying to break into the business, he worked a series of odd jobs until he finally got his break when he landed the role of Ned Bates on the ABC soap opera Loving in 1987.

Perry became even more popular when he was cast on Beverly Hills, 90210. To pursue other acting opportunities, he left the teen drama in 1995 after the sixth season. He, however, returned for the show’s final two seasons.

On the day of Perry’s hospitalization, Fox officially announced a revival of the show. Original series cast members Jason Priestley, Jennie Garth, Ian Ziering, Gabrielle Carteris, Brian Austin Green and Tori Spelling are all returning. Since Perry was starring as Fred Andrews on The CW’s Riverdale, he had not signed on to be a regular on the revival but was reportedly down to do a few guest spots.

Simply titled 90210, the show from CBS TV Studios has received a six-episode order to air this summer. There’s a twist, though. Instead of reprising their characters from the show, the actors will play heightened versions of themselves.

Following the news of Perry’s death, his friends in the entertainment industry took to social media to mourn his passing. Read some of their tweets below:

Dearest Luke,
I will forever bask in the loving memories we've shared over the last thirty years. May your journey forward be enriched by the magnificent souls who have passed before you, just like you have done here, for those you leave behind.

My heart is broken. I will miss you so much Luke Perry. Sending all my love to your family. ❤️ #LukePerry

I’m finding it hard to grasp that he will no longer be around to give long hugs and share his wisdom and kindness with all of us.

I’m thinking of his family. His children.

I pray for them to heal and find peace in this devastating loss.

Luke Perry… you were a joyful and vibrant soul. You will be missed but most certainly your legacy will be remembered forever. Rest in love and peace, friend. #Riverdale

Such a lovely guy. With a wonderful sense of humor about fame and the pitfalls of Showbiz. This is just awful. #RIPLukePerry https://t.co/MtIviZC8uv

Luke Perry was a kindhearted and incredibly talented artist. It was an honor to be able to work with him. My thoughts and prayers go out to him and his loved ones.

The first time I met Luke Perry we talked about what kind of movie we wanted “Buffy” to be. I asked if he’d ever seen “Near Dark” and he gave me a look of HOW DARE YOU SIR and I knew we’d get along. Funny, committed, and always gracious. He shouldn’t be gone.

Luke Perry… you were a joyful and vibrant soul. You will be missed but most certainly your legacy will be remembered forever. Rest in love and peace, friend. #Riverdale

Heartbroken. This can’t be real. Luke is one of the most kind, down to earth and hard-working men in this business. Gutted for his family, and friends. He was so young. Damnit. Praying.

When I was lucky enough to work with Luke Perry I told him about the pillow of his face I used to sleep with and he yelled "You are such a weirdo!" at me and it was the best. Sending love to his friends and family.