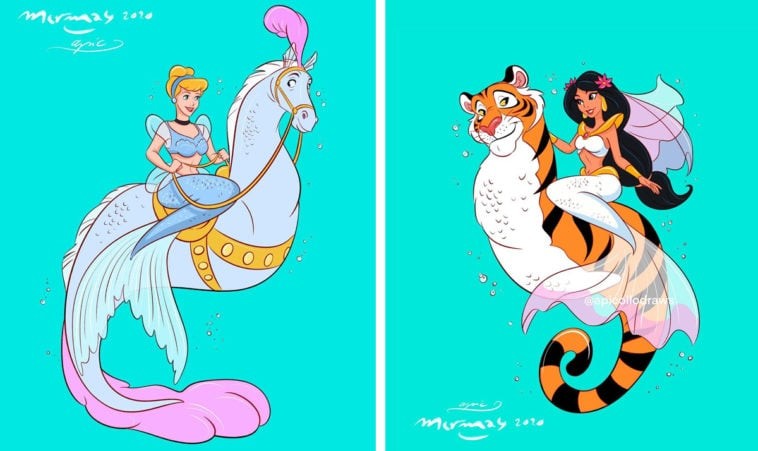 Every May, several illustrators from all around the world take part in MerMay, an art challenge that dares participants to create a piece of mermaid-themed artwork every day for the whole month. German artist Alex Pick joined this year’s MerMay, and his contributions to the challenge show what Disney Princesses would look like if they were mermaids. Check out Pick’s #MerMay2020 entries in the slideshow below to see what happens when Cinderella, Belle, Aurora, and other Disney royalty trade in their legs for a mermaid tail.

This underwater version of Alice looks cute and tiny in her blue mermaid tail and white seashell top inspired by her signature outfit from the 1951 animated film Alice in Wonderland. The titular character is also riding a seahorse version of the movie’s rocking-horse-fly, which has a yellow body, red saddle and hair, and a pair of transparent wings.

Pocahontas is enjoying her first seahorse ride in this amusing illustration that reimagines the Disney Princess as a mermaid. To match her brown mermaid tail and fluke, Pocahontas wears a one-shoulder crop top of the same color, which is based on the traditional Powhatan clothing. The seahorse in the artwork, meanwhile, is the underwater version of John Rolfe’s gray horse in Pocahontas II: Journey to a New World, which is the 1998 direct-to-video sequel to the original 1995 Pocahontas movie.

Anna looks majestic even underwater. Sporting a purple mermaid tail with a fuchsia fluke, the current Queen of Arendelle comfortably rides a sea-reindeer version of Sven in this playful #MerMay2020 artwork. Though Anna trusts Sven, she knows that Kristoff’s loyal companion can be clumsy at times, so she makes sure to hold onto the saddle with both of her hands.

Jasmine is on her way to her underwater wedding ceremony. Riding a “sea-tiger” version of her pet tiger Rajah, the Princess of Agrabah matches her white mermaid tail with a white sweetheart crop top adorned with a gold trim and an amethyst gem on the chest. Just like at her wedding with Aladdin in 1996’s Aladdin and the King of Thieves, Jasmine completes her under-the-sea bridal look with two lavender flowers on her hair and a white wedding veil.

Mary Poppins retains her elegance and panache in this magical artwork that reimagines her as a mermaid. Inspired by her outfit from the merry-go-round scene from her eponymous 1964 musical fantasy film, mermaid Mary Poppins wears a pink/white seashell top that shares the same color as her tail and fluke. To complete her look, Mary Poppins puts on a floral sun hat and holds a frill umbrella as she rides a seahorse version of her purple wooden horse seat from the said carousel ride.

Tiana is having a good time watching Louis play his trumpet underwater. Reimagined as a green-tailed mermaid, the Princess of Maldonia is wearing a light-yellow tube top and a matching tiara inspired by her iconic lily pad dress from the 2009 animated film The Princess and the Frog. Though Louis the alligator is illustrated in the form a seahorse in this artwork, he apparently remains a fan of jazz music just like in the movie.

Snow White is riding into her happy ever after under the sea. Sitting on the saddle of the seahorse version of her Prince Charming’s horse, The Fairest One of All is seemingly on her way to the love of her life in mermaid form. Wearing a blue seashell top with transparent puffy sleeves and a high collar, Snow White looks regal with her bright yellow mermaid tail with a blue/red fluke.

This illustration is the first of Pick’s two #MerMay2020 artworks featuring Cinderella as a mermaid. In this version, Cinderella’s mermaid look is based on her dark brown maid outfit from her eponymous 1950 animated movie. The fan art also includes a seahorse version of Cinderella’s gray horse, Major, who is originally belonged to her late father.

For his second #MerMay2020 Cinderella artwork, Pick transformed the titular character into an elegant-looking mermaid with a matching tail and crop top, based on her sparkling silvery-blue ball gown from the animated classic. As for her mode of transportation, the mermaid Disney Princess is riding a seahorse version of one of the mice-turned-horses from the movie.

Though Megara and Pegasus didn’t see eye-to-eye at the beginning of the 1997 animated film Hercules, the two appear to be in very good terms in this #MerMay2020 artwork. Reimagined as a mermaid and a seahorse, respectively, Megara and Pegasus are smiling back at each other as they travel underwater. While we’re not sure where exactly they’re heading, the white flower Megara is holding suggests that they’re on their way to meet Hercules.

Elsa looks ethereal in this illustration that depicts her as a mermaid. Riding a seahorse version of The Nokk, the Guardian of the Enchanted Forest wears a strapless sweetheart crop top complete with a translucent cape inspired by her white off-the-shoulder dress from the 2019 animated sequel Frozen II. The white/blue color of her mermaid tail and the diamond motifs on her fluke are also based on the same magnificent outfit from the movie.

Esmeralda loves performing so much that she’s still dancing to the beat of her tambourine even underwater. Riding a seahorse version of her husband’s horse, Achilles, Esmeralda is reimagined as a mermaid with a purple tail embellished with gold round pendants inspired by her look from the 1996 animated film The Hunchback of Notre Dame. Completing her under-the-sea getup is a teal/white off-the-shoulder seashell top, pink hair ribbon, gold hoop earring, and matching bracelets.

This #MerMay2020 artwork shows a happy reunion between Ariel and Stormy from the animated TV series The Little Mermaid. For those who are not familiar, Stormy was a wild and violent seahorse that wanted to go to the part of the ocean called the Wilderness. Thinking that she could break him, Ariel took Stormy out of the corral one night and rode off on him. But due to Stormy’s aggressive nature, the Princess of Atlantica ended up hitting her head that knocked her out. Because of the incident, King Triton gave Ariel a calmer seahorse named Seabiscuit, and Stormy was left to return to the wild.

After finding herself into the live-action world of New York City in the 2007 hybrid film Enchanted, Giselle appears to have been transported into the Kingdom of Atlantica where she’s been transformed into a mermaid. Riding a seahorse version of Prince Edwards’ horse, Destiny, the Andalasia-born princess looks enchanting in her off-the-shoulder seashell top that matches her hot pink mermaid tail and fluke.

Merida hasn’t ridden a seahorse before but her impressive horseback riding skills, as seen in the 2012 animated film Brave, have seemingly helped her prepare for this moment. Wearing an off-the-shoulder crop top that matches the blue-green color of her tail, mermaid Merida looks very comfortable riding a seahorse version of her loyal Shire horse Angus.

Reimagined as a mermaid, Aurora is enjoying an underwater stroll with the seahorse version of Prince Phillip’s faithful horse, Samson. Wearing a seashell top that that shares the blue/pink color of her mermaid tail, Aurora is seemingly making an effort to get to know more about Samson while Prince Phillip is away.

Mulan is ready for battle even underwater. Depicted as a mermaid with a look inspired by her blue/green/crimson dress in the infamous Shan Yu battle from the 1998 animated classic, Mulan carries her trusty sword on her waist as she rides a seahorse version of her beloved steed, Khan.

Belle looks radiantly beautiful with her golden mermaid tail and off-the-shoulder seashell top inspired by her iconic ball gown from the 1991 animated film Beauty and the Beast. Accompanying Belle in her underwater travel is her and Maurice’s Belgian draft horse, Philippe, who is transformed into a seahorse to fit the #MerMay2020 theme.

Wearing her hair in a thick braid adorned with various flowers, mermaid Rapunzel appears to be on her way to a special gathering. To get there in time, a seahorse version of Maximus gives her a ride, proving once again that he’s far more reliable than the captain of the Royal Guard of the Kingdom of Corona.

A recreation of one of the official posters for the 1984 film Splash, this #MerMay2020 artwork features Rapunzel as the mermaid Madison, who was played by Daryl Hannah in the Ron Howard-directed movie that also starred Tom Hanks.