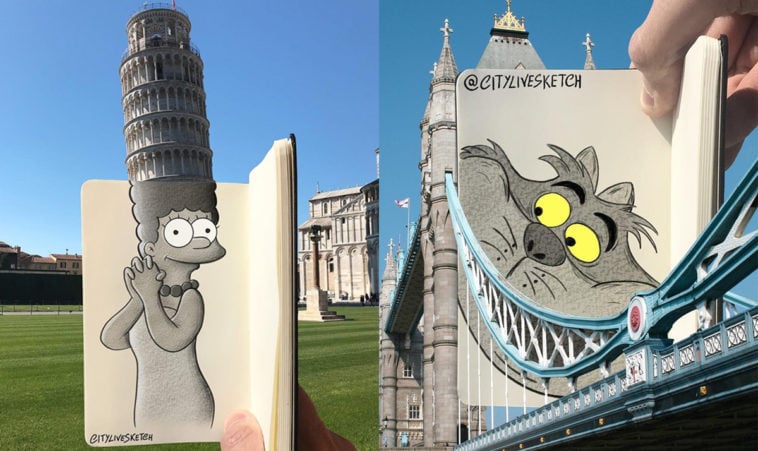 Self-thought Italian artist Pietro Cataudella is best known for his project called City Live Sketch. The ongoing art series kicked off in the summer of 2014 with him drawing architectural structures in his sketchbook and photographing them in front of the actual landmarks he illustrated. In 2016, Cataudella started to get more creative by merging his sketches and pictures seamlessly using Photoshop. And in 2018, he began creating architectural 3D drawings that seem to jump from his mini sketchpad like a pop-up book. But City Live Sketch isn’t all about architecture and scenery, as Cataudella also incorporates playful sketches of pop culture icons to his photographs once in a while. Click through the slideshow below to see some of his best mixed media art pieces.

The arched entrance to a highly ornate structure in Westminster, England completes Cataudella’s impressive drawing of Darth Vader’s helmet. While we don’t exactly know the name of the building, the upper portion of its overly elaborate passageway perfectly complements the top part of the Star Wars villain’s headgear.