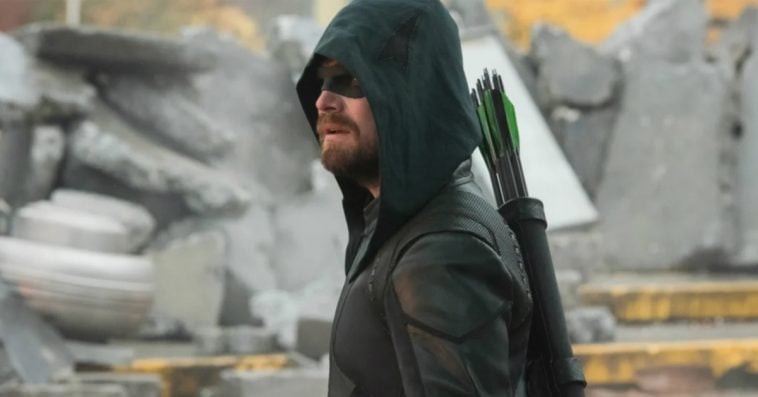 Though Arrow star Stephen Amell was pleased when he found out that Oliver Queen’s death would take place in Crisis on Infinite Earths, the actor was not exactly thrilled with how they ended up filming his character’s first death scene in the crossover.

During his recent appearance on Michael Rosenbaum’s Inside of You podcast, Amell said that Oliver’s death scene in the first hour of the five-part crossover was not slotted perfectly within the filming schedule and that ultimately prevented him from delivering a convincing death scene for his character.

“In the first episode of the crossover that has already aired, my character dies. And he’s dying on a gurney in the Arrow Bunker. My lines are to Kat McNamara, to Caity Lotz, and to Grant Gustin. We’re trying to wrap Caity and Grant because they had hit their 13-hour mark, or whatever it was. They were trying to wrap Caity and Grant before I shot the coverage of the scene where I died … so they don’t … mess up their day the next day [on the sets of The Flash and Legends of Tomorrow],” recalled Amell, before revealing that he ended up delivering his lines to a tennis ball due to issues in scheduling.

Though Amell didn’t blame anyone for the incident, he made it clear that he’s disappointed with how the filming went down. “There are lots of scenes where I’m acting and there just aren’t other actors there, and that’s just not an acceptable way of creating the best product from my perspective,” he said. “I think it is a little disrespectful to actors and their process, speaking personally. Other actors may not give a shit.”

After dying in the first hour of the Crisis on Infinite Earths, Oliver returned from the dead and became The Spectre. He, however, sacrificed his life once again in the Arrow installment of the crossover, creating Earth-Prime along with the new multiverse.

Despite his not so good experience with  the latest crossover, Amell said that filming the crossovers were generally “not brutal.” “They come out great. The fans love them,” he explained. “I always think of what we leave on the table because we try and shoot something really extraordinary, and with this amazing scope within the confines of our typical schedule.”