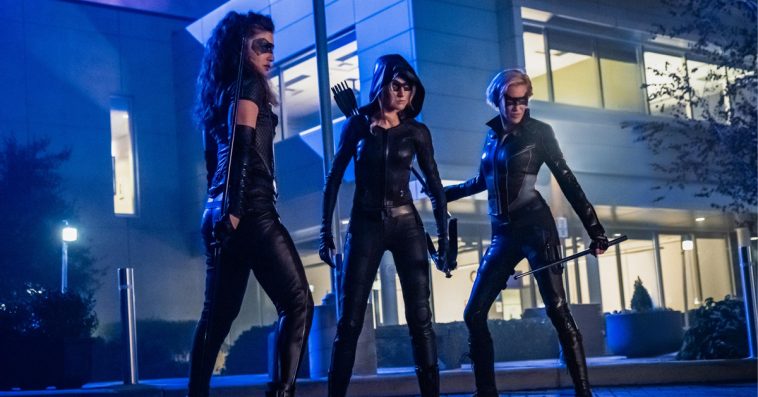 Next week’s episode of Arrow is the much-awaited backdoor pilot for its spinoff series, Green Arrow and the Canaries. And to give fans a sneak peek at the potential series, The CW has released a number of photos from the installment, featuring the offshoot’s main characters Mia Smoak/Green Arrow (Katherine McNamara), Laurel Lance/Black Siren (Katie Cassidy), and Dinah Drake/Black Canary (Juliana Harkavy).

Some of the pictures show the trio casually catching up with each other over glasses of whiskey. There are also photos of the ladies in their superhero outfits while rescuing a kidnapping victim named Raigan Harris (Bianca Bertinell). In one of the pics, Dinah is also seen singing while playing the piano. Check out all the pictures in the gallery below:

Written by Beth Schwartz, Marc Guggenheim, Jill Blankenship, and Oscar Balderrama, the episode is set in 2040 Star City where Mia has everything she could have ever wanted. However, when Laurel and Dinah suddenly show up in her life again, things take a shocking turn and her perfect world is upended.

According to the synopsis for the episode, Laurel and Dinah are tracking Raigan, a kidnapping victim with direct ties to Mia. After the pair asks Mia for assistance, Oliver Queen’s (Stephen Amell) daughter can’t help but be a hero and she, Laurel, and Dinah suit up once again to save the city.

Directed by Tara Miele, the episode airs on Tuesday, January 21st at 8 p.m. ET on The CW. Below is the trailer for the pilot.