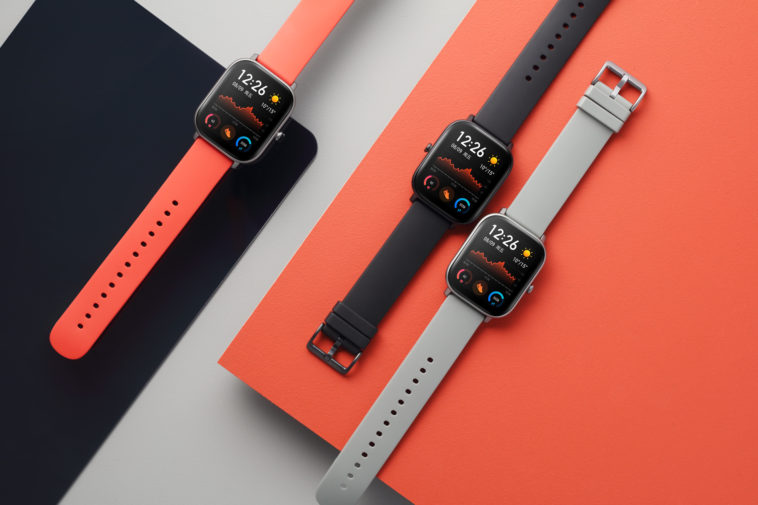 Just a few days before Apple’s fall event, Chinese company, Huami, is an announcing two new Amazfit models at IFA 2019. One of which closely resembles the current Apple Watch. The new Amazfit GTS and Amazfit Stratos 3 are two feature-packed smartwatches that, cost significantly less than the Apple Watch.

At first glance, it’s obvious that the Amazfit GTS’s form factor clearly resonates Apple’s design aesthetic. It sports a 1.65 inch rounded square face with a high-density AMOLED display that is 9.44 mm thick, making it thinner than the Apple Watch. It also offers a choice of bright-colored straps, as well as an option for a rose gold steel frame. Other premium features include a 24-hour heart rate sensor, exercise tracking with 12 different modes, GPS, NFC, water resistance, and sleep tracking (which is yet to be available on the Apple Watch).

The Amazfit GTS was made for the all-around, everyday user. In contrast to that, Huami is offering the more sports-focused Amazfit Stratos 3. It houses a classic round, 1.34 inch, 320×320 resolution, always-on, transflective screen that makes the watch readable under direct sunlight. It also has breathable, silicone straps and four physical navigation buttons in case fingers get too sweaty to use its touch screen.

Like the GTS, it also sports a 24-hour heart rate sensor, multiple sport modes, NFC and GPS. Exclusive to the Stratos 3 is its “Ultra Endurance Mode”. When activated, the Stratos 3 switches to the lightweight Amazfit OS that will allow you to still use all tracking features, such as heart and exercise, without shortening battery life as much. The trade-off for this mode is that the apps available will be very limited, most of which are developed by Huami.

Now, the pride of these watches is having a battery life of at least 14 days. A number that Apple, Garmin and other smartwatch brands have yet to come close to. For the GTS, if GPS tracking is turned on and is in constant use, the battery life falls to around 25 – 70 hours. The Stratos 3, on the other hand, only achieve the promised 14-day battery life when it’s running on the aforementioned, “Ultra Endurance Mode”.

According to Cnet, Huami CEO Huang Wang says in an interview in Berlin, “We have a different thought for smartwatches than Apple. We think you should have long battery life and [not] need to charge every one or two days.”The major trade-off for achieving such a battery life lies is its OS.

Both the GTS and Stratos 3 are powered by Amazfit’s OS. Which, as of the moment, has a limited selection of apps. The OS also lacks its own app store which Huami plans to launch, but no announcements have been made on how soon that will be. It does, however, support both iOS and Android and push notifications.

U.S. pricing for Huami’s new smartwatches has yet to be announced. However, in China, the Amazfit GTS is already available for CNY 899 or about $125. Wang says that international pricing will be different but he does reassure that both models will be cheaper than Apple Watches.