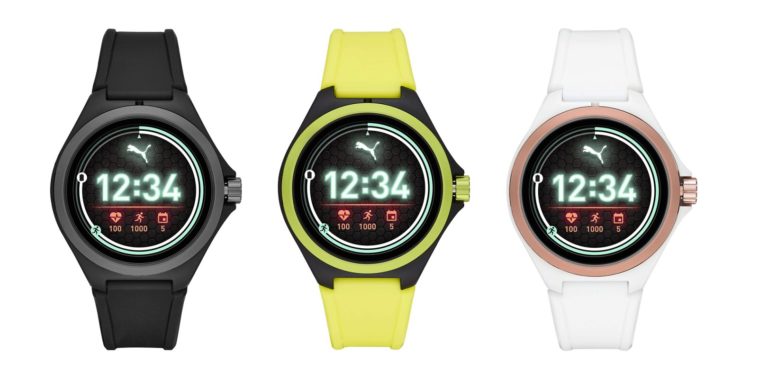 At IFA this past week, Puma has unveiled its first smartwatch, which it has reportedly been working on for the past year with Fossil. The sporty Puma smartwatch packs in 1.19-inch round AMOLED display, which is encased in a 44mm aluminum case and complimented by a nylon strap.

The smartwatch comes with 4GB of storage and 512MB of RAM, which is pretty standard among the majority of Wear OS watches. Where the Puma smartwatch stands out, however, is that it’s much more lightweight than its competitors and weighs only 0.06 pounds. This is primarily accomplished by a variety of cutouts in the device’s sides to help reduce weight.

Alongside this is that the watch is waterproof. Puma seems to be aiming for sports fans with both of these features. The watch also boasts up to 24 hours of battery life, which is driven by its Snapdragon Wear 3100 chipset.

Since the Puma smartwatch is running on Google’s Wear OS, you should expect typical smartwatch features, including fitness tracking, heart rate monitoring, Google Assistant integration, NFC payments, and more. The watch is compatible with 16mm straps which feature a single prong strap buckle.

Believe it or not, this Puma smartwatch is hardly the first gadget that Puma has ever released. For example, the company re-released 1986’s RS-Computer shoe last year, which also included a USB port and Bluetooth.

The Puma smartwatch is set for release this November and it will retail for $275. It will be available in three different colors: black, white, and neon.