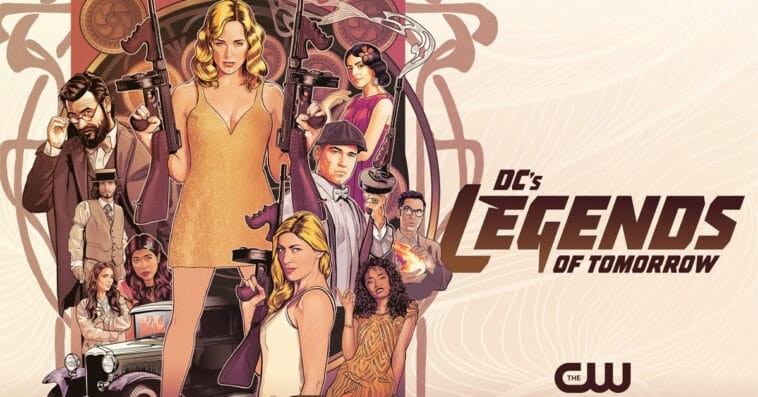 Season 8 of Legends of Tomorrow is still up in the air.

Late last month, The CW renewed seven of its original scripted series for the upcoming 2022-2023 TV season, and sadly, Legends of Tomorrow was not one of them.

Has Legends of Tomorrow been cancelled?

No, Legends of Tomorrow has not been cancelled — at least not yet. The ultimate fate of the superhero drama is expected to be revealed on The CW’s upfronts presentation, which is scheduled for May 19th.

But instead of just waiting around for the network’s decision on the future of Legends of Tomorrow, fans online are actively campaigning for the show’s season 8 renewal. In fact, since the season 7 finale aired last month, fans have been holding Twitter parties to spotlight their love for the series. And on Tuesday, the slew of tweets was so many that the hashtag #RenewLegendsOfTomorrow became one of the top trending topics on Twitter.

This achievement was celebrated by the official Legends of Tomorrow Writers Room Twitter account, telling fans that they are all “doing the Lord’s (Beebo, God of Memes) work.”

Y'all are doing the Lord's (Beebo, God of Memes) work#RenewLegendsOfTomorrow pic.twitter.com/rmYhbE35hR

Below are some of the tweets from fans, which detail their favorite things about Legends of Tomorrow and why The CW needs to renew the series for another season.

The @LoTWritersRoom and the entire cast and crew do their best to deliver us a great show every year.

One of the few comic book shows that’s humorous and good to watch for them feels. Not too corny and not too serious, fun watch!!

#RenewLegendsOfTomorrow if it doesn't happen, I will give up on the entire arrowverse

Is Legends of Tomorrow a silly dumb show? Yes! Does it deserve to be renewed? Also yes! #RenewLegendsOfTomorrow

"I have no master"

This fight scene in Shogun still remains one of my favorites even after all the years and craziness that this show has gifted us. @caitylotz is a real-life ninja. #RenewLegendsOfTomorrow pic.twitter.com/6bjOn3Lj9Y

One of my favourite scenes is definitely this, its funny and charming and I have to say all three really pull of the suits! @caitylotz #RenewLegendsOfTomorrow #RenewLegends pic.twitter.com/9PCYUGp7Cn

What will happen in season 8 of Legends of Tomorrow?

If Legends of Tomorrow gets a season 8, showrunner Phil Klemmer told TV Insider that fans are going to know more about Booster Gold (Donald Faison), who made his debut appearance in the season 7 finale.

“For sure. We’re not gonna let Booster get away,” Klemmer said when asked if the plan is to keep the new character on the board for a potential season 8. “I’m really excited to write him — he’s the kind of character you wish you could be. You could get away with murder and be so charming that you never really have to suffer the consequences. He’s the antithesis of a writer. Writers are deeply neurotic and self-loathing self-doubting, etcetera. I think that’s why we writers are drawn to those characters—because those are our secret alter egos.”

And with the Legends being arrested by a group of time cops at the end of the season 7 finale, Klemmer teased that a potential season 8 will deal with “a real imprisonment out of space and time,” noting that the Waverider crew “have fudged up in such a way that they’re not going to be allowed to exist within the timeline.”

The potential season 8, however, won’t just be about incarceration. “I think there might be some playful reeducation, which we all know they don’t think they need,” Klemmer commented. “I don’t think it’s gonna be Ivy League quads and stuff like that. It’ll be a little prison, a little reeducation. And then there’ll be a new mythology and a new big bad behind it.”

When asked if the new big bad would be in the form of a major corporation or government, Klemmer answered, “Capitalism is in our sights. We’re going to look at the corrosive effects of capitalism and industry run amok.”

Furthermore, in a separate interview with Entertainment Weekly, Klemmer said that fans can also look forward to seeing more about Sara Lance’s (Caity Lotz) pregnancy in the potential season 8. “There’s comedy to it, but there’s realness to it. It makes me very excited for next season,” said Klemmer.