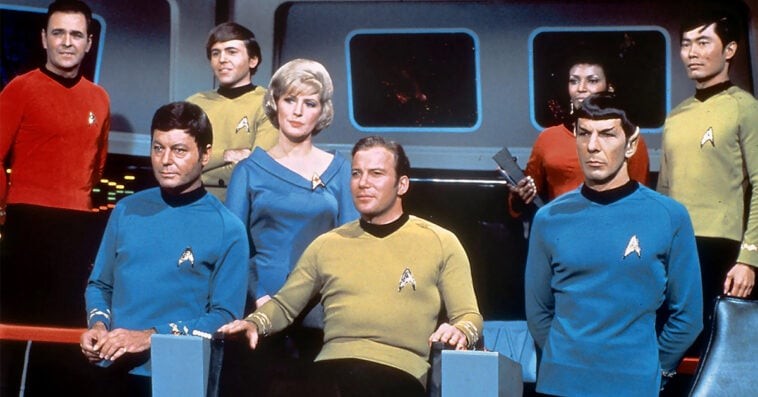 The season of gift-giving is upon us, and if you’re looking for the perfect presents for your Star Trek–loving friends and family members, then you’ve come to the right place. Star Trek is one of the biggest sci-fi franchises ever, so it’s no surprise that there are lots of merchandise items based on its beloved characters, TV series, and films. A quick Internet search will reveal that some of the most common Star Trek gifts include Star Trek costumes, Star Trek stickers, action figures, mugs. posters, and books. But if you want to leave a lasting impression on your loved ones, below are the great Star Trek gifts you may want to purchase for them this holiday season or whatever the special occasion is.

What are the best gifts for Star Trek fans? 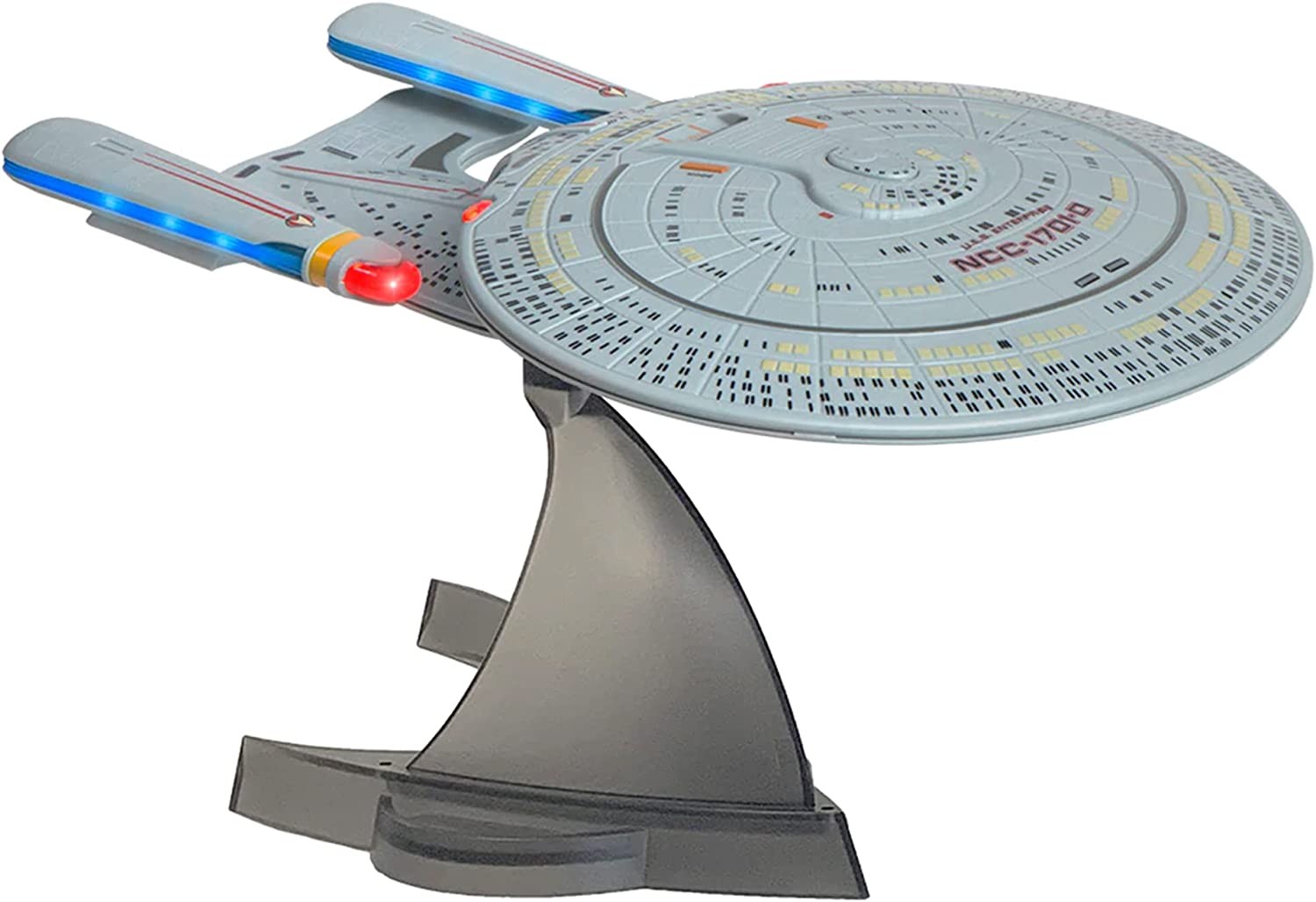 The speaker also functions as a LED night light that turns on and off while you listen to music or fall asleep. The LEDs illuminate the ship’s Bussard collectors, warp engines, saucer engines, main impulse engines, and deflector dish. These LEDs power on and off with the press of a button, allowing you to listen to music or white noise with or without lights.

It comes with a USB rechargeable lithium-ion battery, a 31.5-inch micro-USB charging cable, and a stand shaped like the Starfleet insignia. 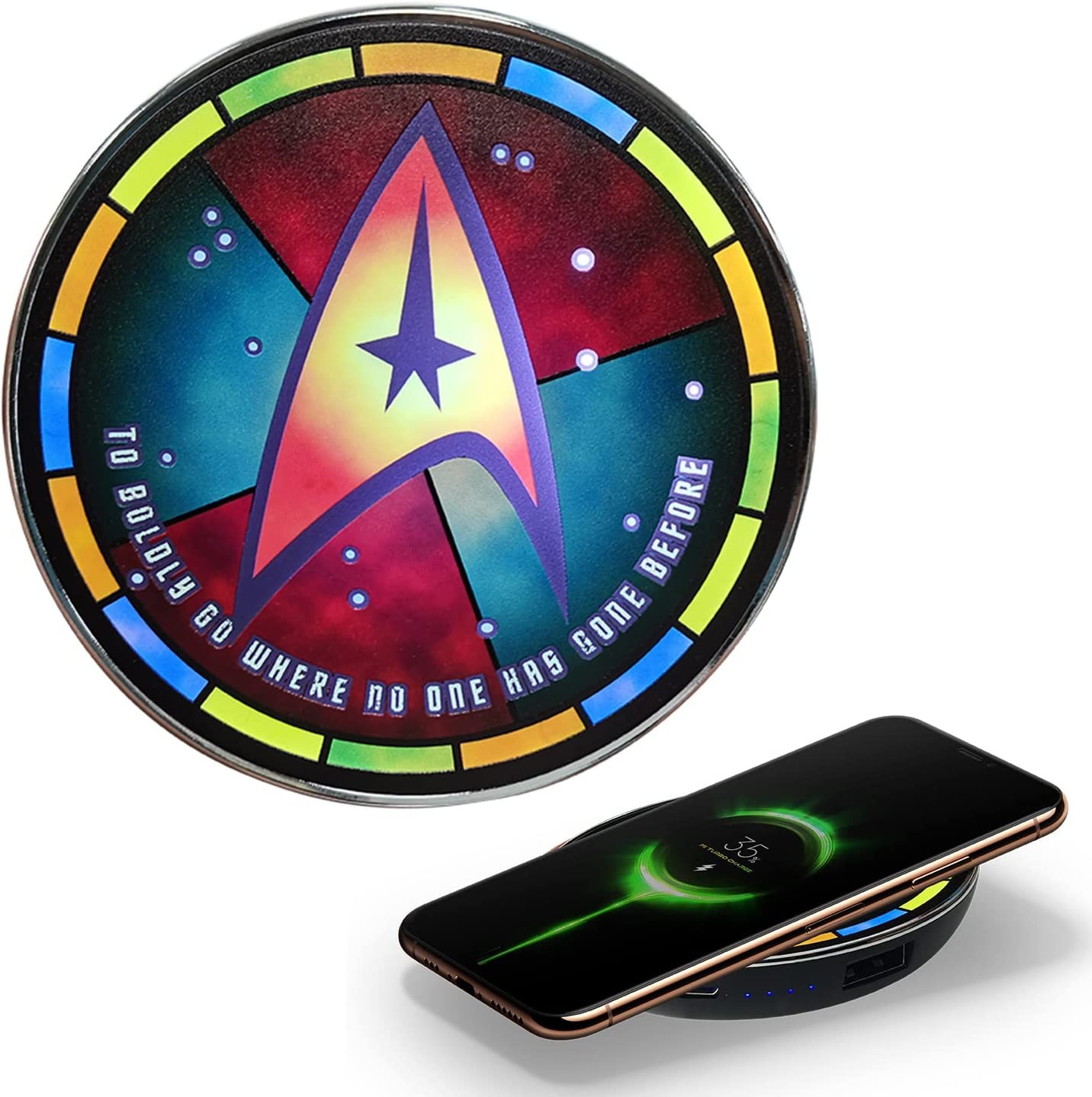 Any Star Trek fan will love this wireless charger featuring the Starfleet insignia that illuminates when in use and the franchise’s famous phrase “To boldly go where no one has gone before.” Compatible with Apple and Android devices, the Star Trek Qi wireless charger comes with a backup battery pack, allowing you to charge two devices at the same time. You can charge a device wirelessly at 5W 1/A while powering up the backup Lithium-ion battery via the supplied micro-USB.

The charger’s Starfleet logo lights up with a backlit LED when charging or when you press the check battery button to find out the battery level of your device. You can also turn off the LED while charging by simply holding down the side button until the LED is off. 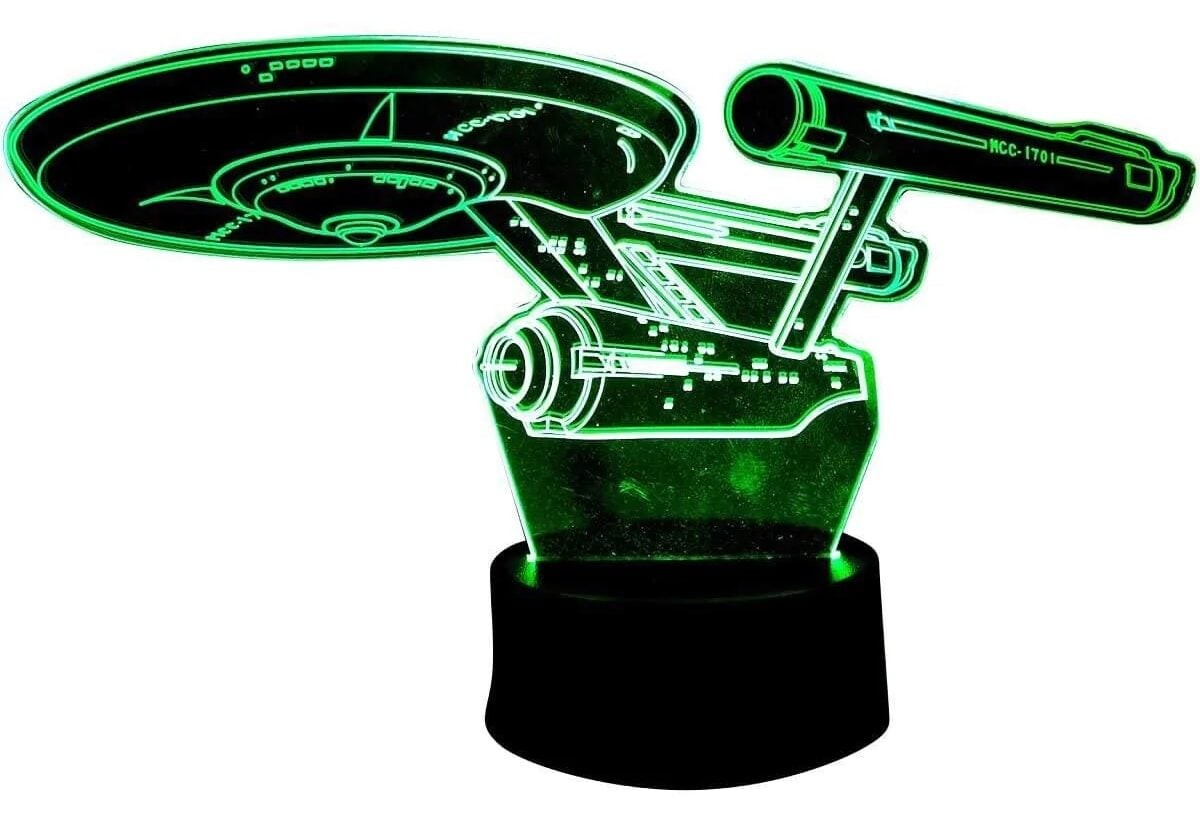 Another illuminated Star Trek gift that Trekkies will love is this 3D acrylic LED lamp that features the iconic silhouette of the USS Enterprise from Star Trek: The Original Series. A great display for any Star Trek fan’s bedroom or office, this officially licensed Star Trek collectible features a colorful light show that is sure to mesmerize Star Trek lovers as they watch the starship fades from white, yellow, green, light blue, blue, purple, and red. Measuring about 7 3/4 inches long by 5 3/4 inches tall, the lamp can be powered by a computer, tablet, phone, or any device with a USB port. 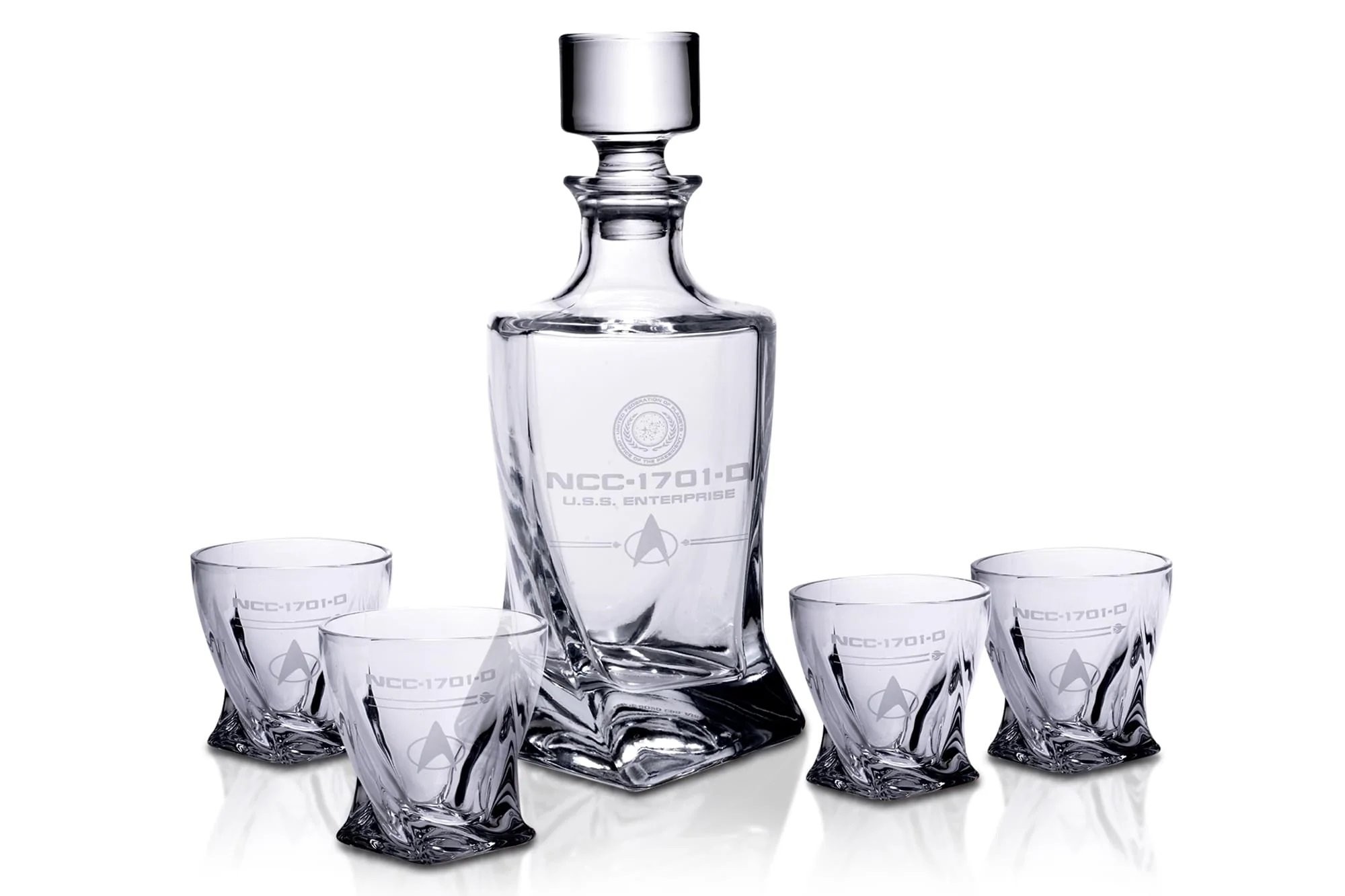 If your Star Trek-loving friends and family loves social drinking then this whiskey decanter set is one of the best Star Trek gifts you can give them. Featuring a stylish, futuristic design, this barware gift set comes complete with one 26-ounce liquor decanter, one stopper, and four 10-ounce whiskey tumbler glasses. The tumbler glasses are elegantly inscribed with NCC-1701-D and the delta shield, while the liquor decanter features the United Federation of Planets logo and the words USS Enterprise. 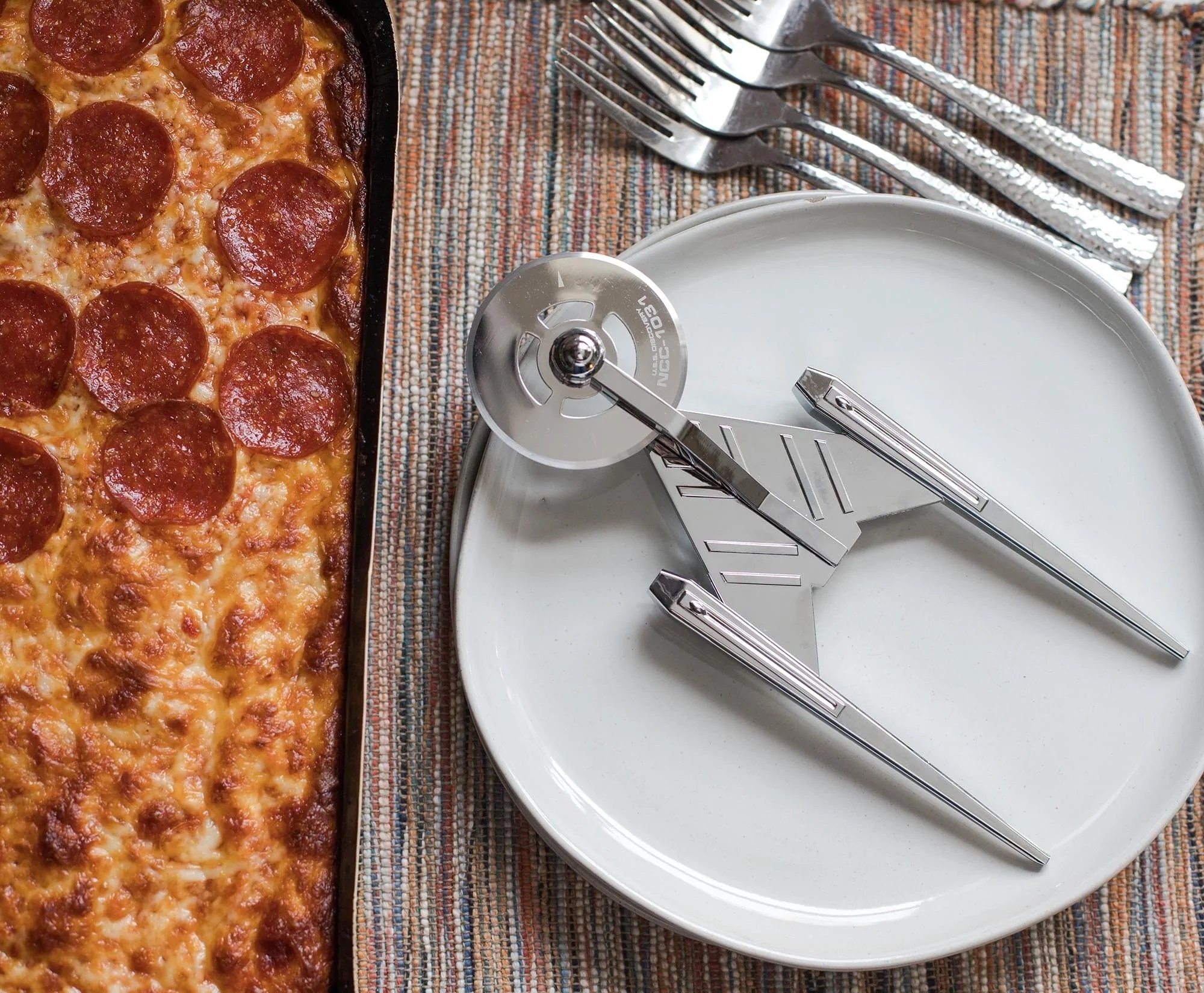 A must-have addition to any Star Trek fan’s kitchen, this pizza cutter is modeled after the Crossfield-class starship from Star Trek: Discovery. Featuring a sleek finish with a futuristic look, this kitchen essential features a solid metal construction and stainless-steel blade. The saucer section of the starship functions as the blade while the base of the space vessel serves as the handle. For an added Star Trek detail, the ship designation is laser-etched on the wheel of the stainless-steel blade.

Feeling more generous? You can gift this pizza cutter along with this officially licensed silver metal bottle opener that comes in the shape of the NCC-1701 ship from Star Trek: The Original Series. 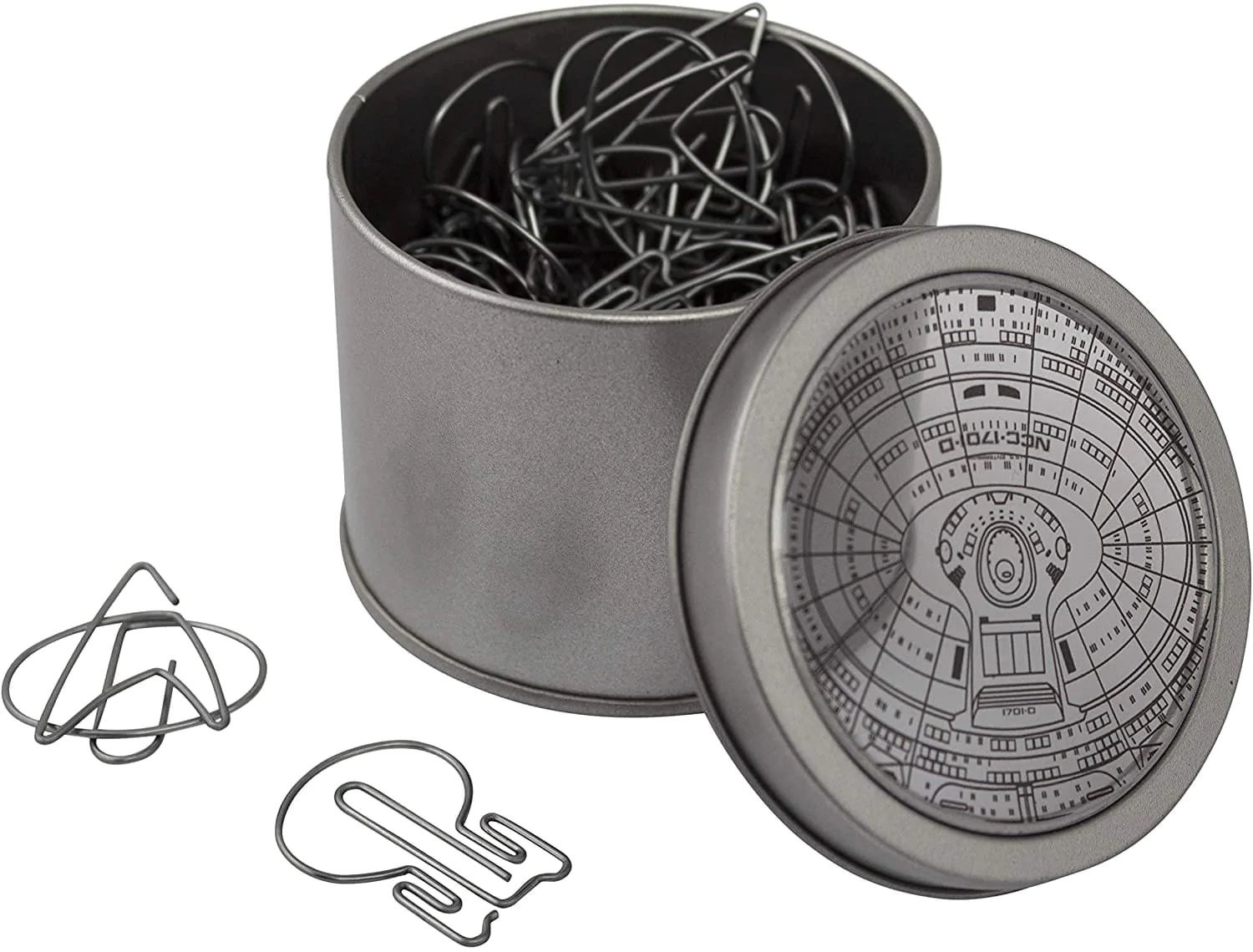 The best Star Trek gifts aren’t always expensive. For instance, these Star Trek: The Next Generation paper clips make a great gift at an affordable price. Packed in a stylish tin can with a lid replicating the saucer of the NCC-1701-D, these paper clips come in two designs: the USS Enterprise NCC-1701-D and the Starfleet insignia. Each can contains 40 clips, 20 of each design.

Planning to gift these paper clips with other Star Trek-themed stationery items? You can bundle them up with the Star Trek: The Original Series sticky notes booklet and the Star Trek Captain’s Log large notebook, where Star Trek fans can keep their own captain’s log just like Captain Kirk and Captain Picard. 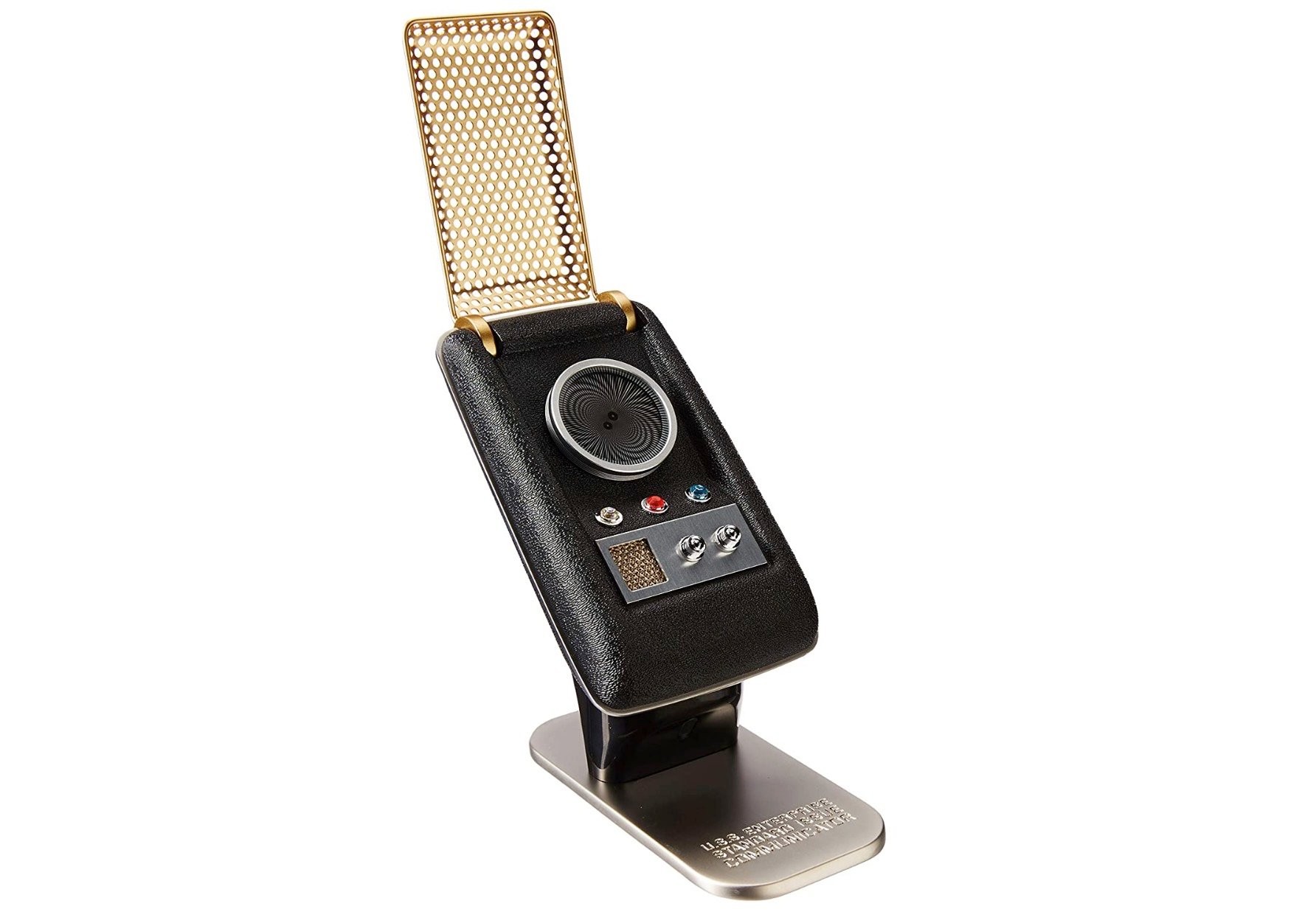 Complete any Star Trek costume with this communicator replica. Designed using extremely accurate 3D scans of one of the last remaining communicator hero props from Star Trek: The Original Series, this fully functioning, display-grade product is highly faithful to the original prop.

Durable enough to be used in play and cosplay, this prop replica features authentic sound effects and original voice clips from the Star Trek universe, providing plenty of opportunity for in-universe interaction and fun. Aside from being a prop and costume accessory, this Star Trek collectible can actually be used as a person-to-person communications device, thanks to its Bluetooth functionality. 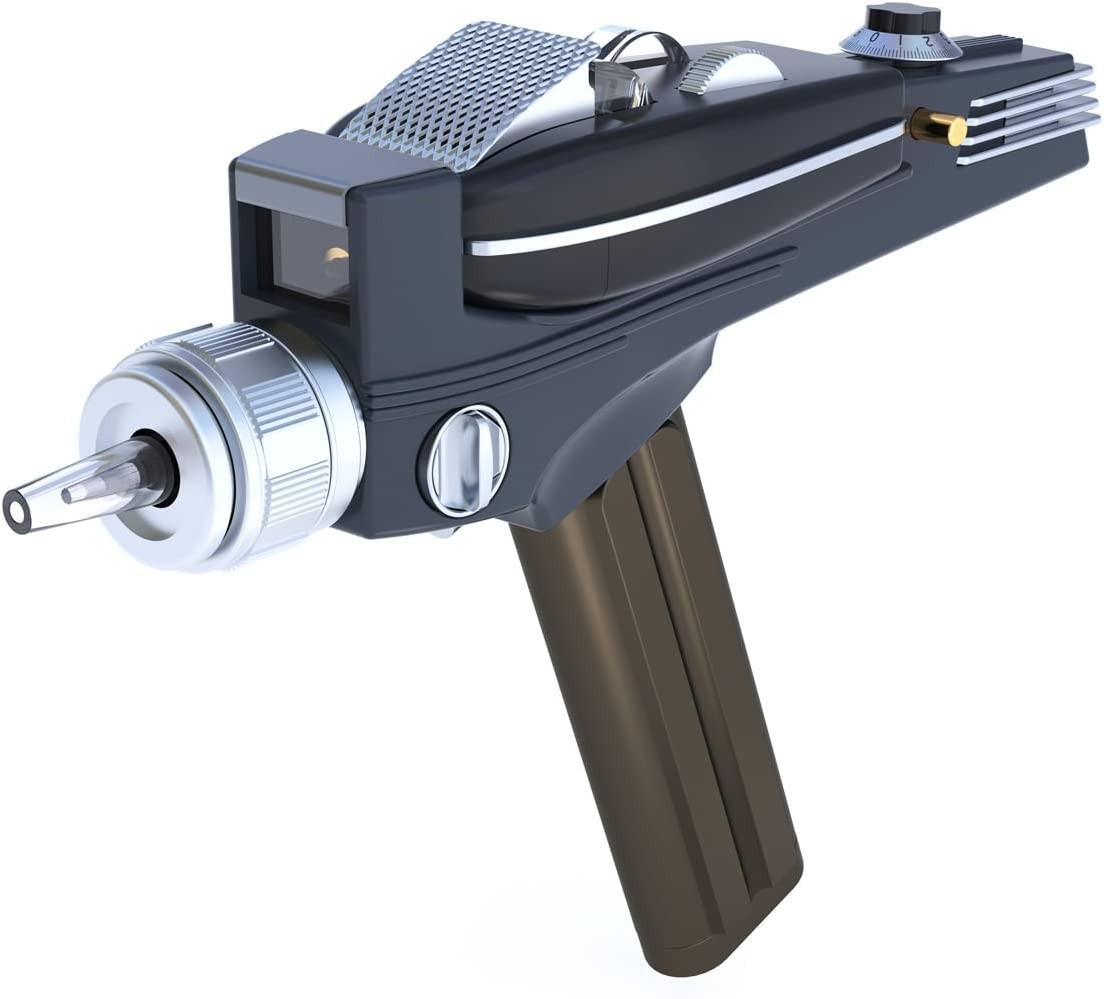 If your friends or family member love watching Star Trek TV series and movies, then this universal TV remote control in the shape of a Star Trek phaser is the perfect gift for them. This highly authentic screen-accurate hero prop replica looks and feels like the real thing. It features a multi-color illuminated beam emitter, authentic phaser and Enterprise sounds, as well as spoken prompts from the Star Trek universe.

A fully functioning gesture-based universal remote control, this phaser replica is suitable for controlling almost all home entertainment systems and other infrared remote-controlled devices. Created from 3D laser scans of the last known hero prop, this Star Trek collectible has advanced gesture recognition that can store up to 36 different remote control codes. 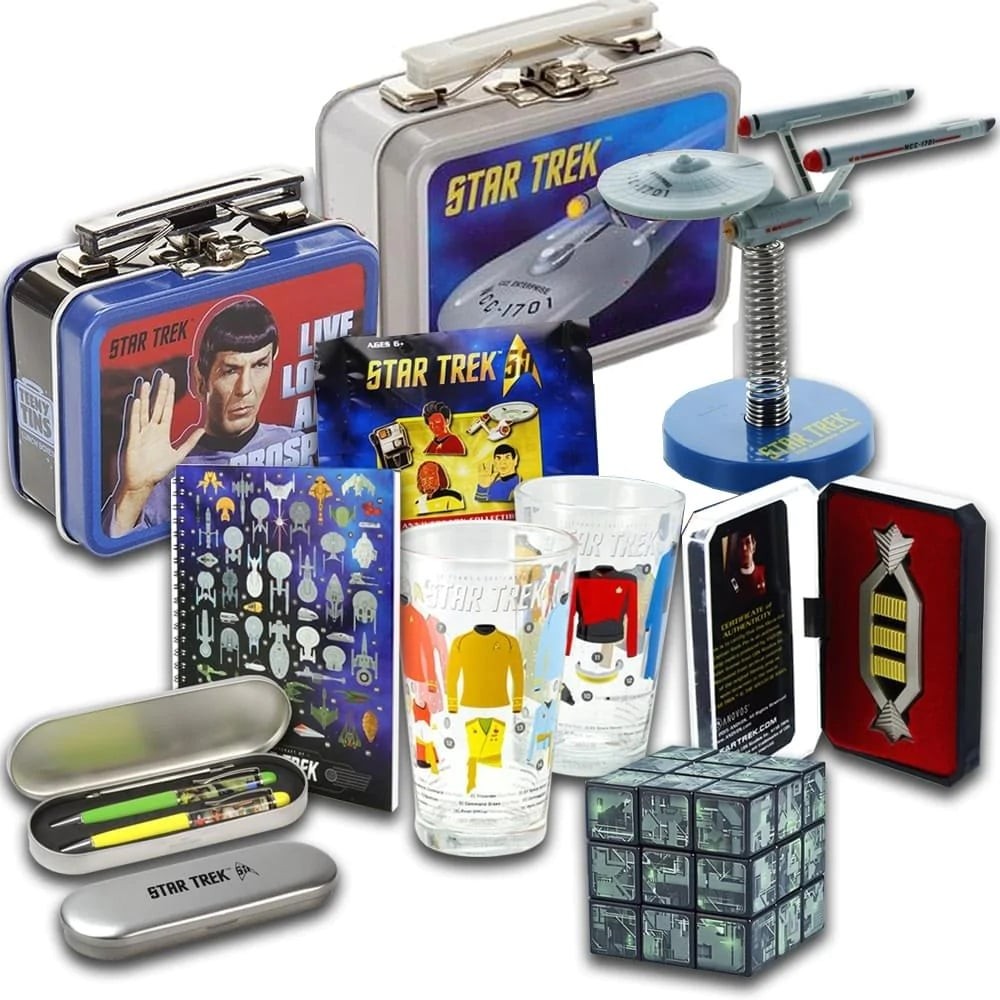 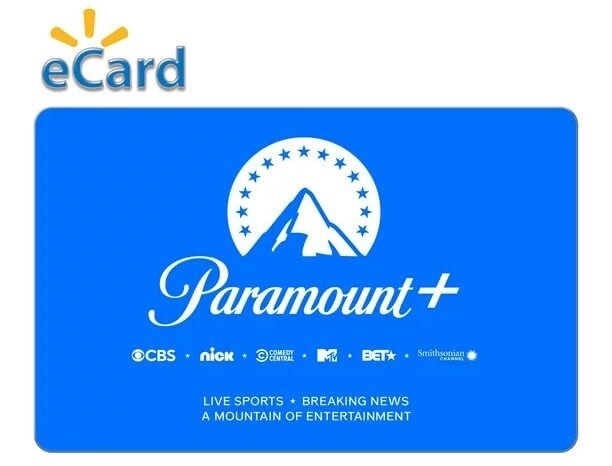 Paramount+ is the streaming home of many Star Trek TV series and films, so a Paramount+ gift card is one of the best Star Trek gifts a Trekkie can receive any time of the year.

Aside Paramount+ originals like Star Trek: Discovery, Star Trek: Picard, and Star Trek: Lower Decks, fans can watch other hit shows such as Survivor, NCIS, and S.W.A.T., on the streaming service, as well as tens of thousands of episodes on demand from BET, CBS, Comedy Central, MTV, Nickelodeon, Nick Jr., and Smithsonian Channel. 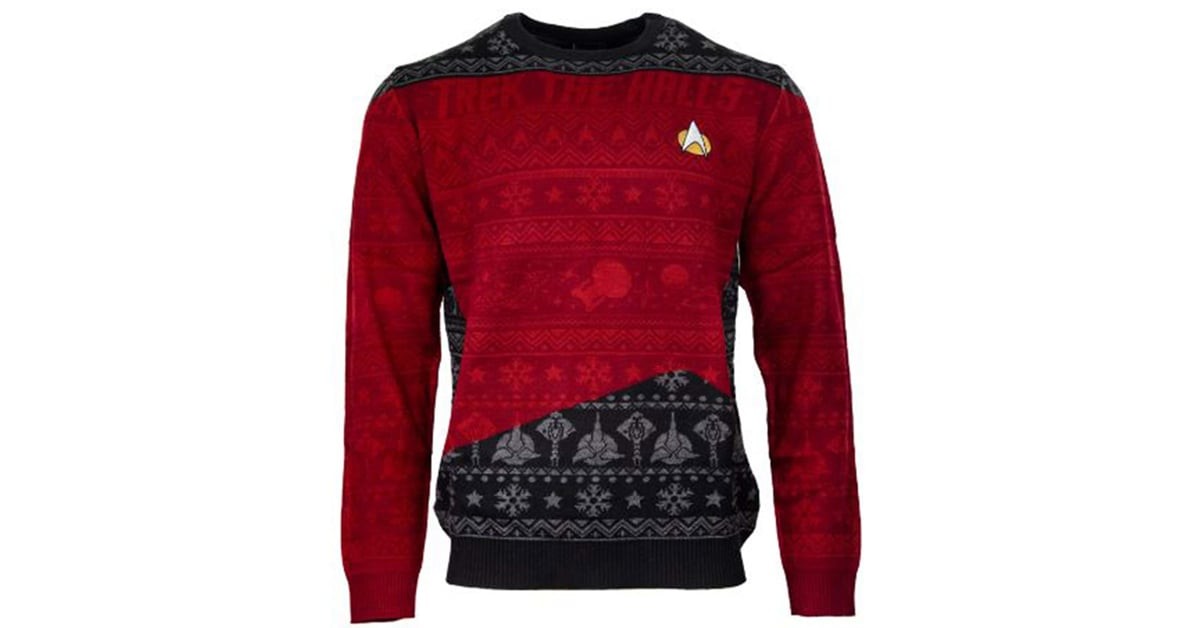 Live long and prosper! This Star Trek-themed Christmas sweater is the perfect get-together outfit for any adult Trekkies this holiday season. Reminiscent of the uniforms worn by the USS Enterprise crew in Star Trek: The Next Generation, this sweater has red and black base colors and features graphic patterns of snowflakes, stars, and starships. There’s also a Starfleet insignia embroidered on the front of the sweater. Priced at $49.99, the sweater is available in X-Small, Medium, Large, X-Large, 2X, and 3X sizes. Let your friends and family see the Star Trek universe from the perspective of a man on a five-year mission at the Star Trek: The Original Series Museum Tour. The museum tour features a meticulously recreated bridge of the USS Enterprise, so guests can take photos of themselves where Captain Kirk and his crew members sat, and make memories that will last a lifetime.

Each ticket cost $23-$50, with the latter ticket option being called Special Photo Tour. In the said tour, a photographer will take pictures of you in each room, and you will receive your photos by digital download to enjoy. 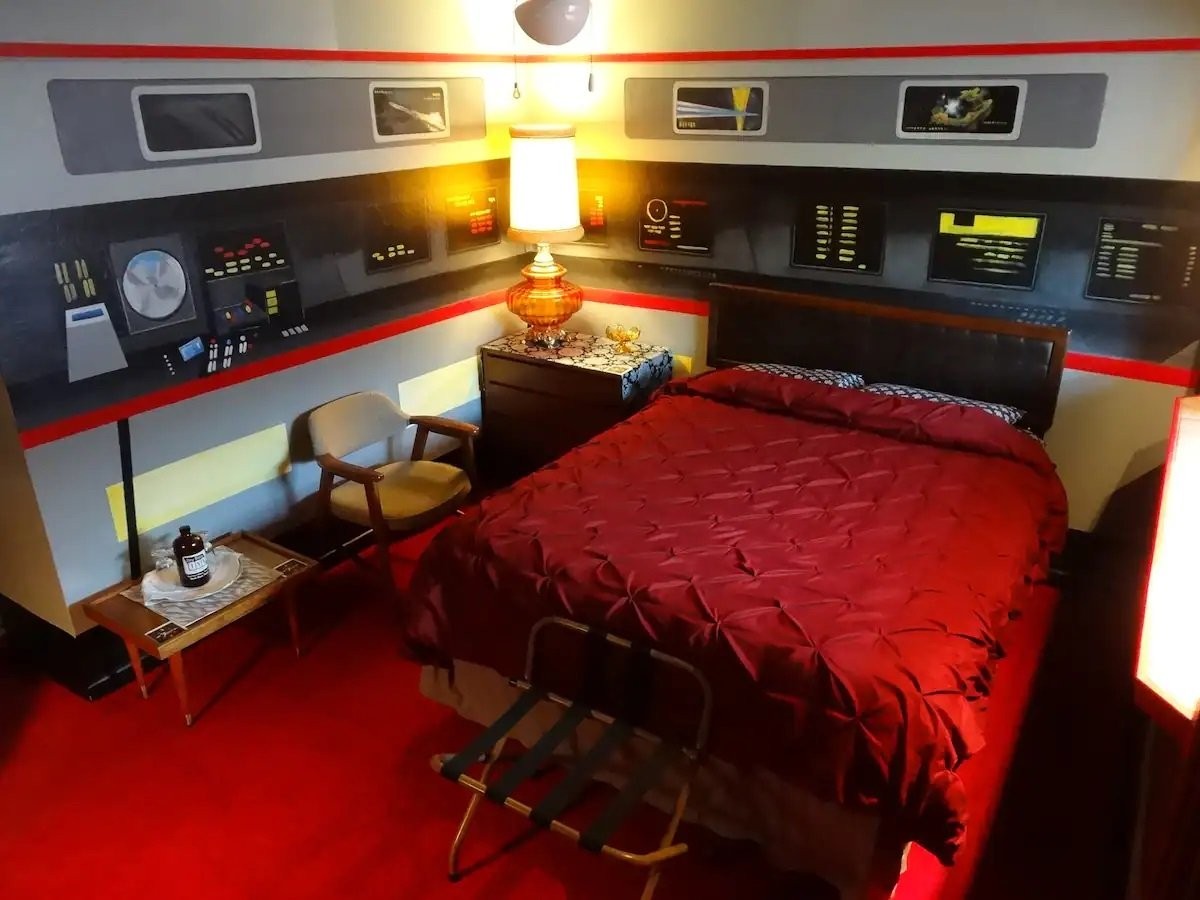 Star Trek fans will love to stay in a Star Trek-themed room, so booking this room on Airbnb as a present for any Star Trek in your life can never go wrong. The design of the room is inspired by the bridge of the USS Enterprise from Star Trek: The Original Series. Featuring screen-accurate stage props, the room is part of a mid-century roadside motor inn located on Highway 101 in North Bend, Oregon.