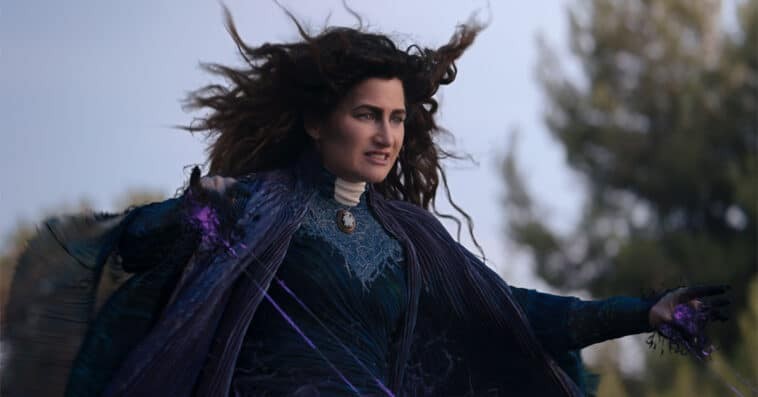 A WandaVision spinoff is in development at Disney Plus.

Sources told Variety that the spinoff from Marvel Studios will center on Agatha Harkness, the character played by Kathryn Hann in WandaVision. Though plot details on the potential series are still being kept under wraps, sources have described it as a black comedy.

The spinoff will be written and exec produce by WandaVision head writer Jac Schaeffer. Should Disney Plus pick up the project to series, it would be the first project Schaeffer has set up with Marvel since she signed an overall deal with them and 20th Television last May.

Hahn made her debut MCU appearance in episode 2 of WandaVision as Agnes, Wanda (Elizabeth Olsen) and Vision’s (Paul Bettany) nosy neighbor. But in episode 7, Agnes was revealed to be Agatha Harkness, a powerful witch that has survived the Salem Witch Trials with the end goal of harnessing all of Wanda’s magic. After getting defeated by Wanda in a face-off, Agatha was last seen trapped in Westview and reverted back to her Agnes persona in the series finale.

WandaVision, the first live-action Marvel series to debut on Disney Plus, received widespread acclaim during its run from January to March earlier this year. The show scored a total of 23 nominations at the 73rd Primetime Emmy Awards, including one for Hahn for best supporting actress in a limited series. Hahn previously earned an Emmy nod for her performance as Raquel Fein on Amazon’s comedy-drama Transparent.

In addition to the WandaVision spinoff, Hahn is also set to star in a limited series centered on the late comedian Joan Rivers, which is currently in development at Showtime. She’s also part of the cast of the Apple series The Shrink Door and the Rian Johnson movie Knives Out 2.

Schaeffer, meanwhile, is known for writing, directing, and producing the 2009 romantic dramedy film TiMER. She also penned the screenplay for the 2017 animated short Olaf’s Frozen Adventure and for the 2019 crime comedy flick The Hustle, starring Anne Hathaway and Rebel Wilson. Schaeffer, along with Ned Benson, also worked on the story for the MCU movie Black Widow, which was released earlier this year.