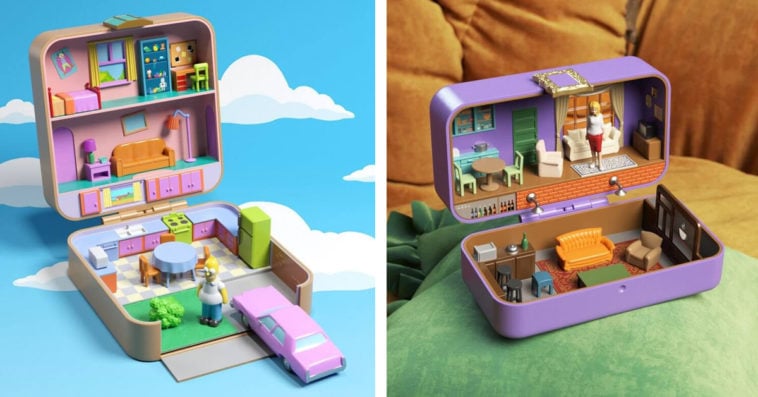 If you’re a ‘90s kid, then you’re probably familiar with mini compact dollhouses called Polly Pockets. First created by Chris Wiggs in 1983 for his daughter Kate using a makeup powder compact, Polly Pocket has been relaunched and redesigned several times under its current owner Mattel, but the sets made by its original manufacturer, Bluebird Toys, remain iconic and popular among fans.

Given Polly Pocket’s lasting popularity, folks at TheToyZone think that Mattel has the potential to recreate the commercial success of the LEGO movie franchise by giving fan-favorite films and TV series the Polly Pocket treatment. To prove that their idea is achievable, TheToyZone team, in partnership with CGI artist Jan Koudela, created 3D models of Polly Pockets based on The Simpsons, Friends, Stranger Things, The Lord of the Rings, The Shining, and The Royal Tenenbaums. Take a look at each one of them in the list below. 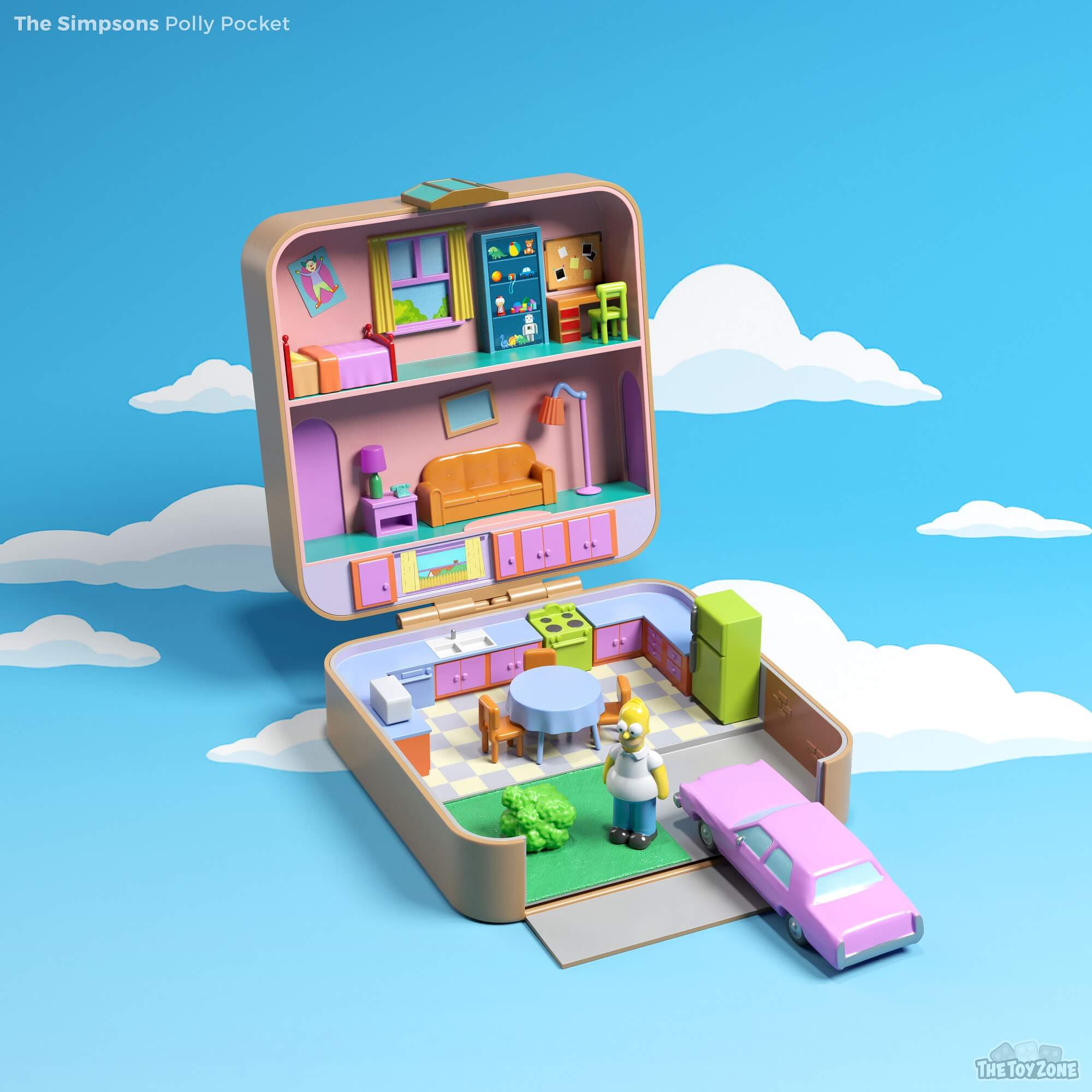 This Polly Pocket features the iconic living room, kitchen, and garage of The Simpsons’ residence. The fictional home has a total of four bedrooms, but given the limited space of Polly Pockets, only Bart Simpsons’ bedroom is included in the design. With a figure of Homer Simpsons and a mini replica of the family’s pink sedan, this 3D model will probably make some fans crave for a “Polly Pocket-ified” episode of the long-running Fox sitcom. 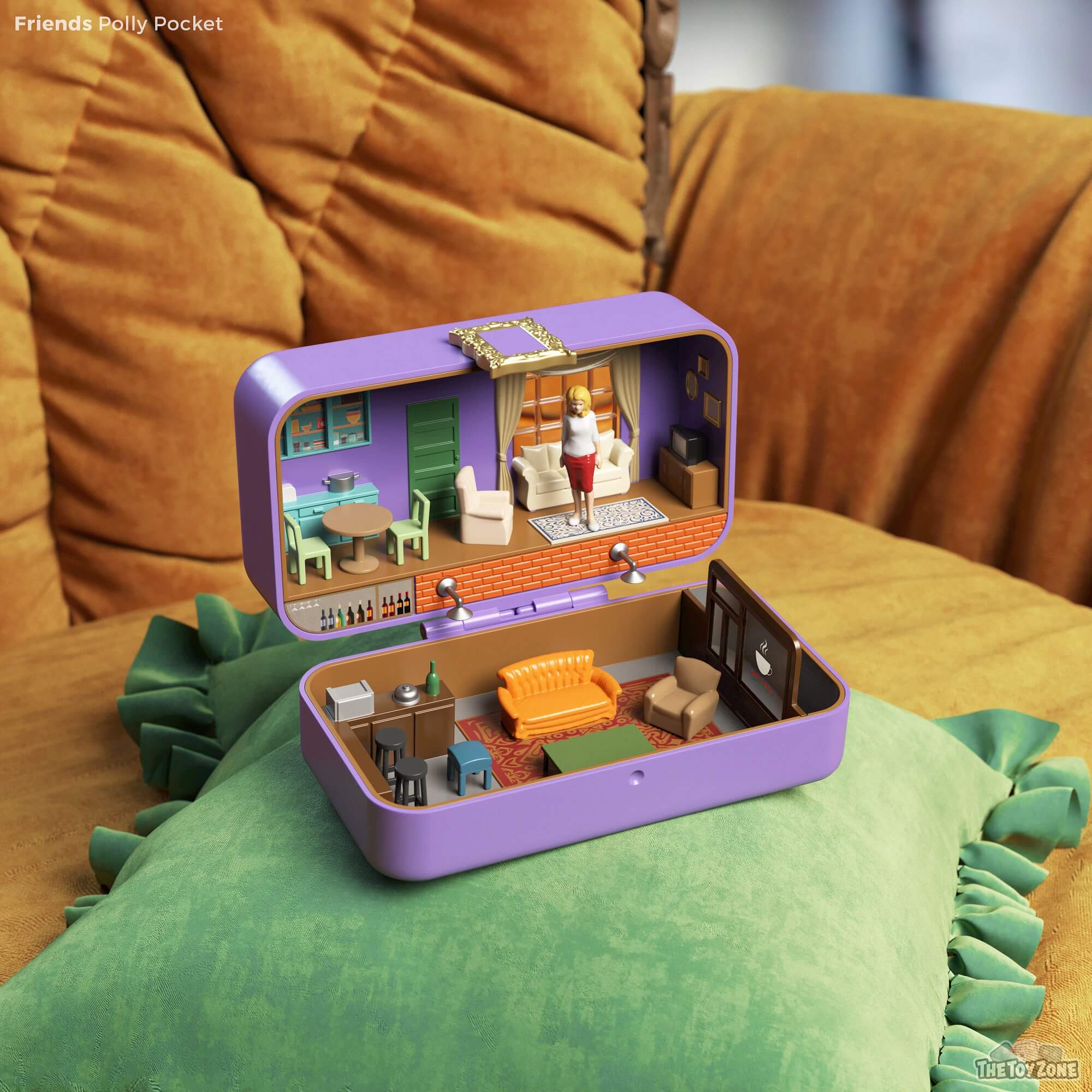 This Friends-inspired Polly Pocket is divided into two parts: Monica Geller’s (Courteney Cox) apartment and Central Perk. The top part of the compact dollhouse is a recreation of the kitchen and the living room of Monica’s apartment, while the bottom portion features the titular group of friends’ favorite hangout spot at Central Perk, which includes the infamous orange couch that is seemingly reserved for them. 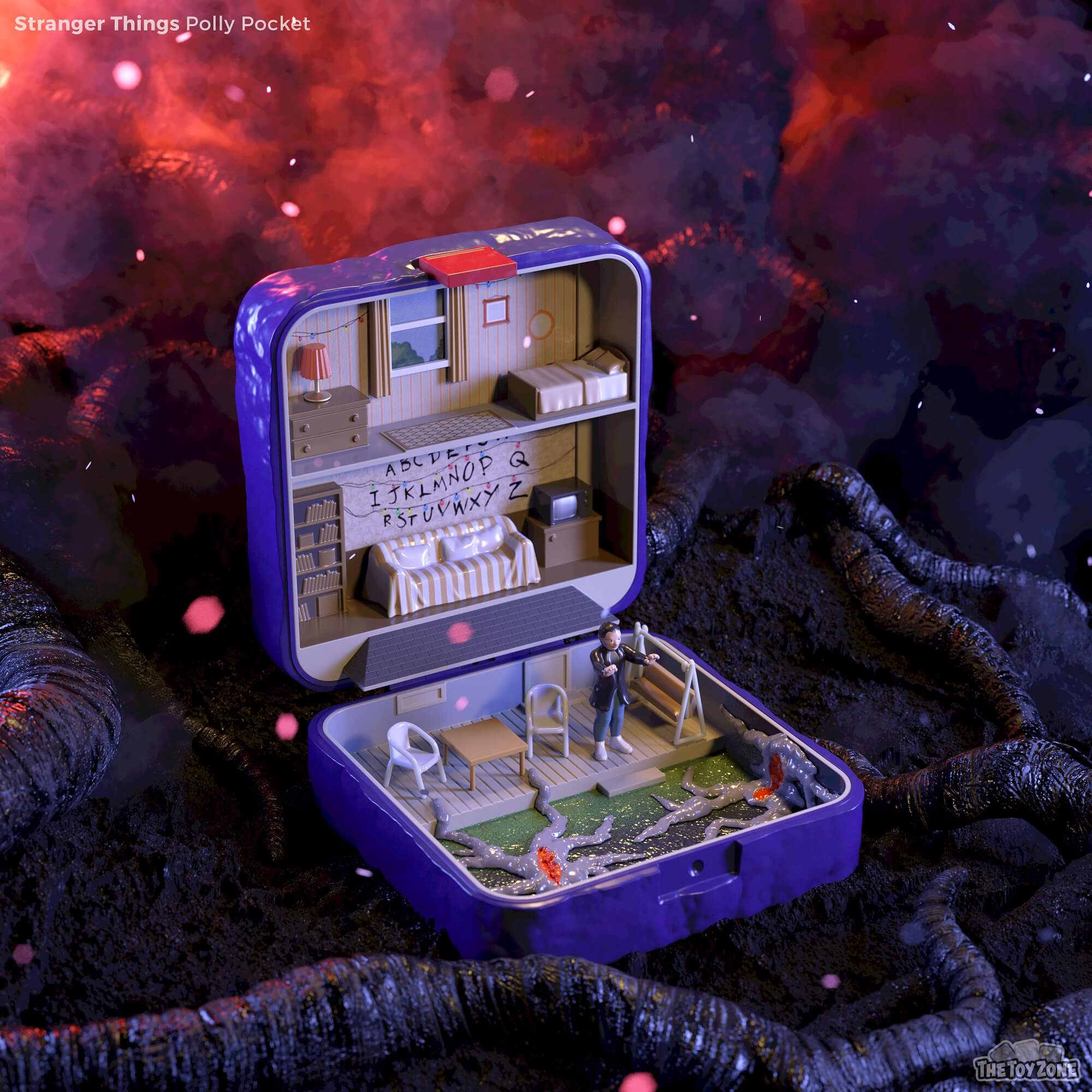 Three-fourths of this Polly Pocket features the porch, living room, and one of the three bedrooms of the Byers’ house, while the remaining one-fourth of the dollhouse shows a glimpse into the creepy alternate dimension called the Upside Down. This somber-looking 3D model includes a figure of Eleven (Millie Bobby Brown) who appears to be closing a portal that connects the real world and the Upside Down.

#4 Hobbit House (The Lord of the Rings) 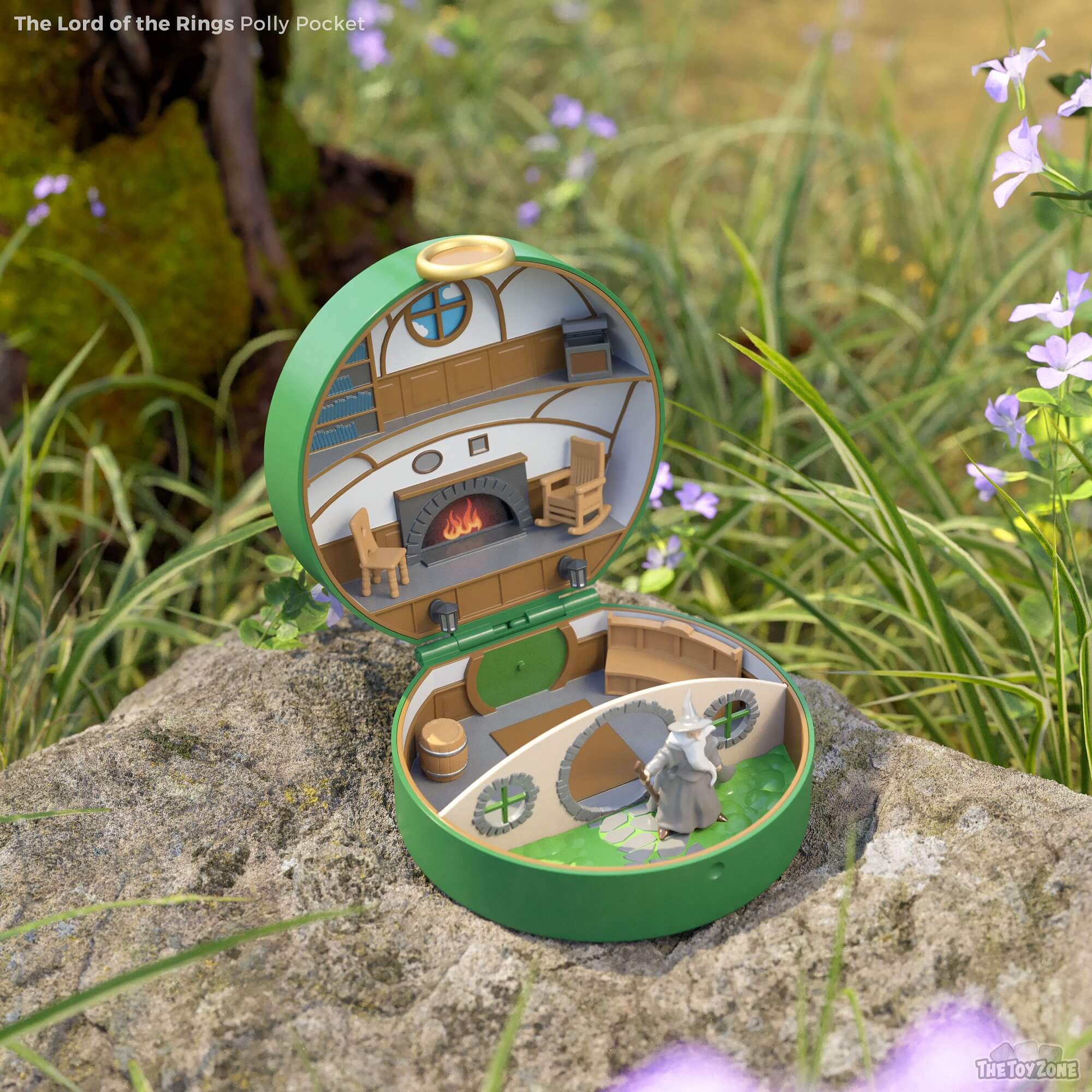 This Polly Pocket is inspired by the many Hobbit-holes, aka Smials, featured in The Lord of the Rings movie franchise. Like those found in the Shire, this Hobbit House has round doors and windows as well as a fireplace to keep its residents warm. A figure of Gandalf the Grey (Ian McKellen) is seen standing outside, probably waiting for Bilbo Baggins (Martin Freeman) and the rest of his Hobbit pals to arrive.

#5 The Overlook Hotel (The Shining)

Shaped like a three-tier cake, this Polly Pocket has captured the creepy vibe of the main setting of the 1980 film The Shining based on Stephen King’s 1977 novel of the same name. It features an empty hotel room, a chilling hallway, and a spacious restroom with tiles as red as blood. The bottom part of the compact dollhouse is divided into two: the hotel’s lobby where a figure of Jack Torrance (Jack Nicholson) is seen standing with an axe, and a portion of a hedge maze where guests can get lost forever.

#6 The Tenenbaums’ residence (The Royal Tenenbaums) 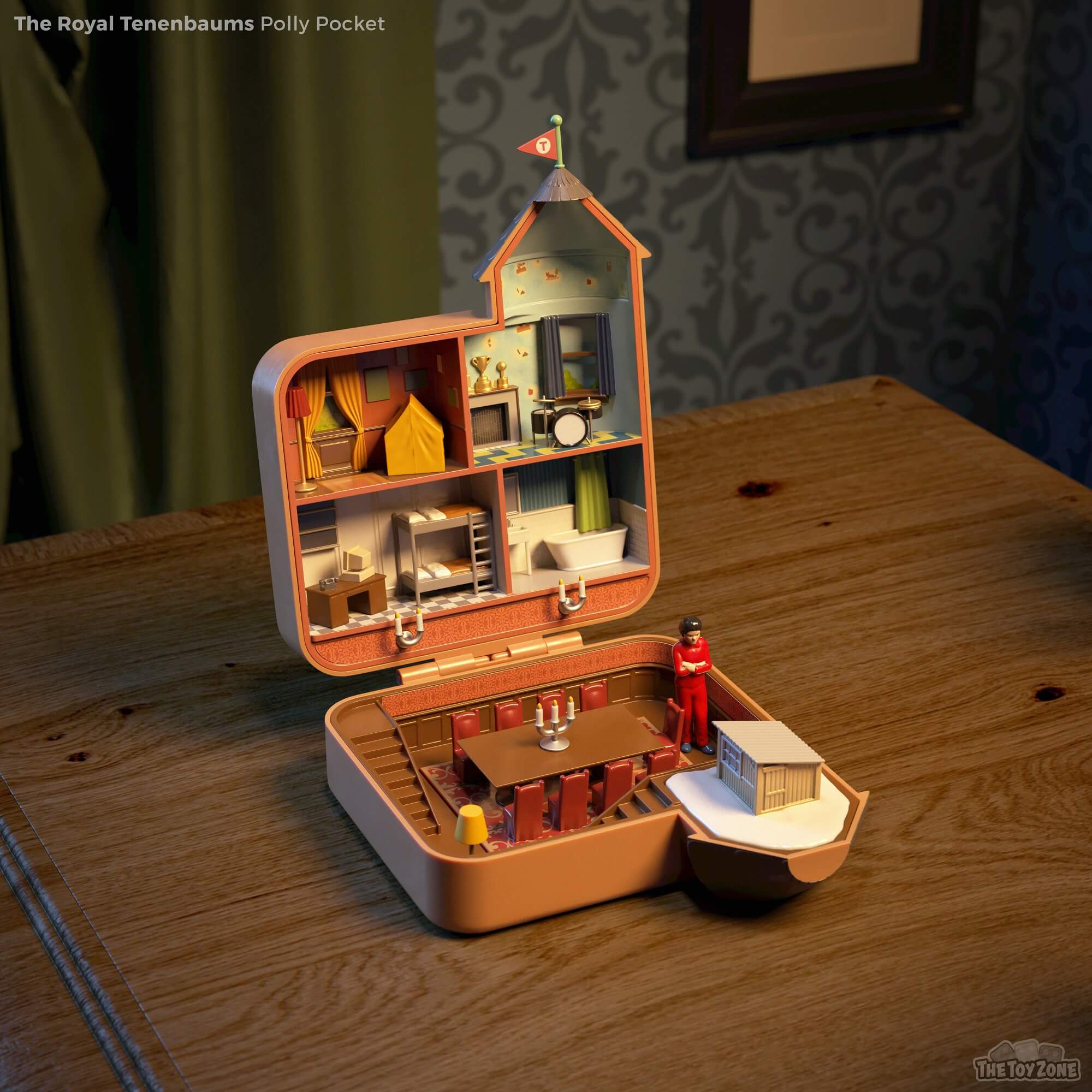 Based on a real house at 144th Street and Covenant Avenue in Harlem, New York where portions of the 2001 Wes Anderson comedy-drama were filmed, this Polly Pocket recreates five different rooms featured in the Oscar-nominated film. It also includes a figure of Chas Tenenbaum (Ben Stiller) in his signature crossed-arms pose.