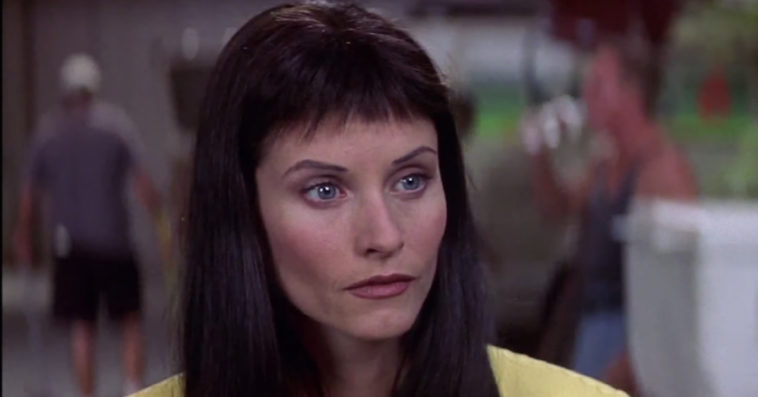 The Friends alum announced her return to the meta horror franchise on Instagram with a teaser that shows the iconic Ghostface mask, along with the line “I can’t wait to see this face again.”

Cox appeared in the first four Scream movies alongside David Arquette and Neve Campbell. While Arquette has already been confirmed to reprise his role as Dewey Riley in Scream 5, there’s no official word yet on whether or not Campbell will also come back as Sidney Prescott.

Though Cox’s Gale played a huge part in stopping the original four Ghostface killing sprees, several Scream fans are more excited to see what her hair is going to be in the next Scream movie.

I am, of course, over the moon that Courteney Cox will be back as Gale Weathers in a new #Scream. But, what I really need to know now is what hair are we getting next? #Scream5 #horror #movies #thosebangs pic.twitter.com/aZkTQDCZS1

genuinely cannot wait to see what truly wild hair choice they give courtney cox in the next Scream movie pic.twitter.com/JbAxNHCulf

Say what you will about SCREAM 5, but you know we’re all going to watch it to see what Gale Weather’s hair is going to be

As Scream diehards know, Gale has had quite a hair journey throughout the four Scream films, with her funny hairdo in Season 3 being the most memorable.

nothing but respect for the OG queen of quarantine hair, Courteney Cox in Scream 3 pic.twitter.com/mh67pj1rYp

Sometimes when I’m feeling like shit, I just remember Courteney Cox’s hair in Scream 3 to cheer me up pic.twitter.com/2fypNN7ku7

While plot details about Scream 5 are being kept under wraps, the movie is currently being described as a relaunch of the franchise.

Matthew Bettinelli-Olpin and Tyler Gillett, the filmmakers behind 2019’s comedy horror hit Ready or Not, will direct Scream 5 from a screenplay penned by James Vanderbilt and Guy Busick. Franchise creator Kevin Williamson and Chad Villela are executive producing the movie with Project X Entertainment’s Vanderbilt, Paul Neinstein, and William Sherak serving as producers.

In a statement, Bettinelli-Olpin, Gillett, and Villela ― who are collectively known as the horror filmmaking group Radio Silence ― expressed their excitement about working with Cox. “We can’t imagine Scream without the iconic Gale Weathers and are so incredibly thrilled and humbled to have the opportunity to work with Courteney,” Radio Silence said. “We’re absolute mega fans of her work and we’re so excited to join her in the next chapter of the Scream saga!”

Scream 5 doesn’t have a release date yet, but production on the project will shoot in Wilmington, North Carolina, with additional casting underway.