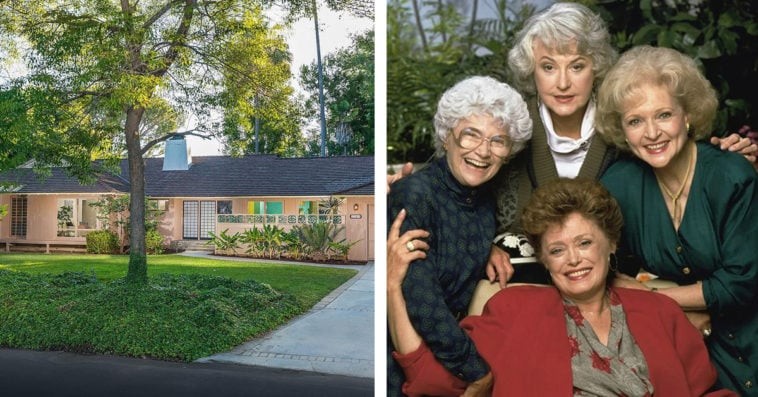 The home from the classic NBC sitcom The Golden Girls has hit the market for the first time in 65 years.

Listed for $2.999 million by real estate firm Douglas Elliman, the roughly 3000-square-foot property was featured in the show’s first season as the exterior for Blanche Devereaux’s (Rue McClanahan) house, which she shared with her friends Rose Nylund (Betty White) and Dorothy Zbornak (Bea Arthur), following the death of her husband. Dorothy’s 80-year-old mother, Sophia Petrillo (Estelle Getty) also moved into the house after her nursing home burned down.

For the subsequent six seasons of the series, however, the show built an exact replica of the house at Disney’s Hollywood Studios in Orlando, Florida, which remained there until it was demolished for space in 2003.

Though The Golden Girls is set in Miami, the house is actually located in the affluent Los Angeles neighborhood of Brentwood at 245 N. Saltair Avenue. SoCal Edison attorney David Noble Barry III and his wife Margaret Carr Barry had the house built in 1955 and lived there for the remainder of their lives. David died in 2017, while Margaret passed away in 2019. The property is now being sold through a trust.

The couple’s 65-year-old son James told the Wall Street Journal ― which first reported the sale of the property ― that the show’s location scouts chose the house because of its outdoor plantings that gave the home a Miami look. David and Margaret received a small fee to have the exterior of the house appear on camera. They also lent the property’s original blueprints to the show’s producers for the construction of the home’s replica.

Thank You for Being a Friend ✨???One of the most famous homes in Hollywood history, an impeccably maintained…

Designed by award-winning Hawaiian architects Allen Johnson and Thomas Perkins, the Midcentury Modern-style home boasts four bedrooms, three baths, and one half bath. The interiors of the house never appeared on the series, but based on the photos shown above, it looks like its kitchen is a stand-out. With cabinets painted in shades of avocado green, robin’s egg blue, and buttercup yellow, the room is arguably the home’s most unique area.

The property also features a rear living room with a beamed ceiling and a fireplace, Japanese-style screen doors that separate areas of the home, and a Japanese engawa (wraparound porch) that surrounds the perimeter of the house.

The pricey price tag of the property should not come as a surprise as homes featured in popular shows and movies often sell with a premium. For instance, back in 2018, HGTV paid twice the asking price for a Studio City midcentury home that appeared as the exterior of the Brady household on the ABC sitcom The Brady Bunch.