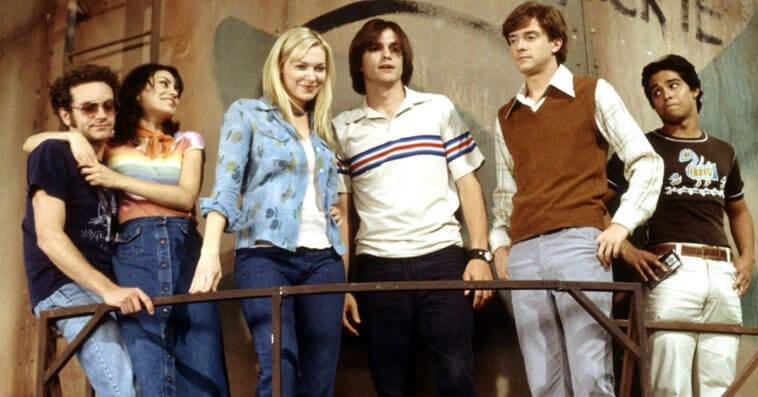 All of the original young cast members of That ‘70s Show except one are returning for the upcoming Netflix spinoff series That ‘90s Show.

After prolonged negotiations, five of the six original young stars of That ‘70s Show have closed deals to come back for the spinoff. According to Deadline, Topher Grace (Eric Forman), Mila Kunis (Jackie Burkhart), Ashton Kutcher (Michael Kelso), Laura Prepon (Donna Pinciotti) and Wilmer Valderrama (Fez) will all reprise their roles in the spinoff in what is described as “legacy cast making special guest appearances.”

Danny Masterson, who played Hyde in the original series, is the only original young cast member not returning for the spinoff. Masterson is preparing to stand trial on multiple sexual assault allegations, which he has denied.

Grace, Kunis, Kutcher, Prepon, and Valderrama join their fellow ‘That ’70s Show alums Kurtwood Smith and Debra Jo Rupp, who were both announced as series regulars on That ‘90s Show back in October 2021. Smith and Rupp will reprise their roles as husband-and-wife Red and Kitty Forman, while also serving as executive producers on the show.

Set in Wisconsin in 1995, the 10-episode first season of That ‘90s Show follows Leia Forman (Haverda) ― daughter of Eric (Grace) and Donna (Prepon) ― who is visiting her grandparents for the summer and bonds with a new generation of Point Place kids under the watchful eye of Kitty (Rupp) and the stern glare of Red (Smith). The spinoff is expected to touch on the topics of sex, drugs, and rock ‘n’ roll, as the synopsis for the new spinoff notes that these three never die, but simply “change clothes.”

That ‘90s Show doesn’t have a release date yet, but production on the show’s first season started in February.