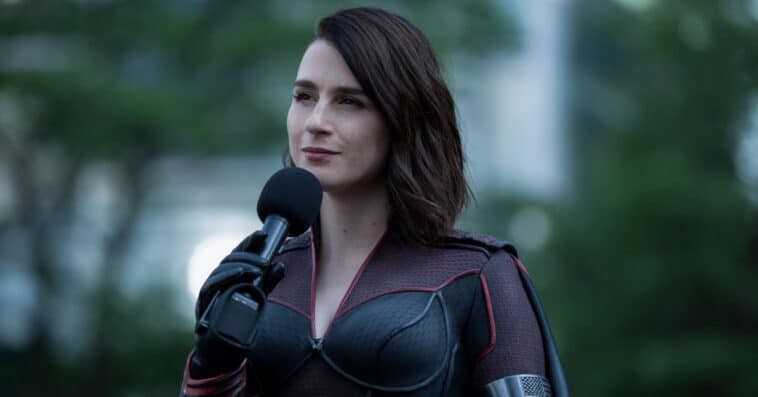 Though charred and crippled at the end of the season 2 finale of The Boys, Stormfront (Aya Cash) is far from dead. So will the Nazi superhero make a comeback for the upcoming season 3 of the Amazon series?

Cash revealed last October that her initial contract for The Boys was only for one season. And it appears that her contract had not been extended, as she didn’t fly back to Canada, where season 3 was filmed.

“I want to know if she’ll be back too. I’m not there (Canada) now,” the actress told Entertainment Weekly earlier this year when asked if Stormfront would return for season 3. “I’m on a new Fox show now called This Country. My contract for The Boys was only for a year so, who knows? Maybe they can CGI my face in.”

While it seems that Cash didn’t film any scenes for season 3 of The Boys, the latest installment of the show’s ongoing web series suggests that seeing Stormfront in one form or another next season remains a possibility.

The in-world newscast Seven on 7, which was produced by Vought News Network, confirmed on Thursday that Stormfront is still alive. News anchor Cameron Coleman (Matthew Edison) reported that the supe is “securely locked away” in an undisclosed location, adding that Stormfront’s loyal supporters ― aka the Storm Chasers ― have continued to advocate the supe’s vision of the future, despite the horrific charges that have been filed against her. Though the Storm Chasers have been consistently demanding that Stormfront’s whereabouts be made public, Vogue executives have remained mum on the matter.

“She’s not dead. She’s just a stump,” series creator Eric Kripke said of Stormfront in an interview with Entertainment Weekly last October. “Among the writers and talking with Aya, we’re like, ‘Well, what is going to happen to Stumpfront?’ So we’ll see.”

Though Stormfront’s season 3 return is not yet set in stone, a comeback for the character named Love Sausage has been confirmed since last October. Played by Andrew Jackson, Love Sausage first appeared in season 2, episode 6 as one of the escaped patients from the Sage Grove Center. He was a test subject in Vought’s attempt to stabilize the Compound V, which gave him the power to fully control his abnormally large penis as though it was a tentacle.

“He’s so absurd,” Kripke said of Love Sausage. “Without spoiling anything, someone just successfully pitched, not an extended return but a return of Love Sausage in season 3. So, there’s more Love Sausage on the horizon.”

The Boys season 3 doesn’t have a release date yet but the show’s first two seasons are currently streaming on Amazon Prime Video.