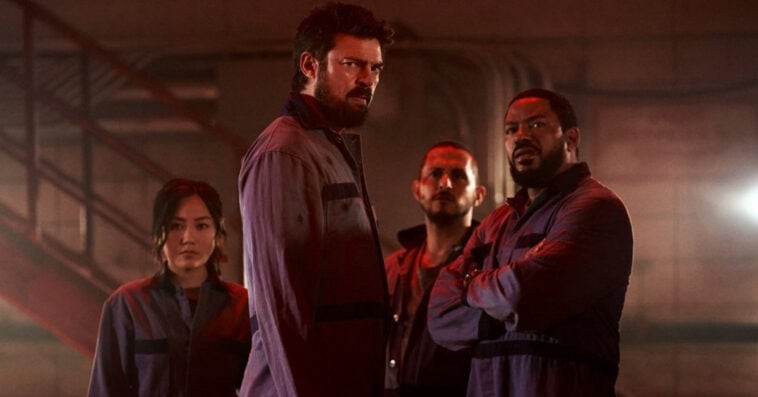 The Boys spinoff Varsity may feature familiar faces from the main series.

The Boys showrunner Eric Kripke, who also serves as an executive producer on Varsity, has confirmed that the two shows will cross over with one another, suggesting that some characters from the parent series may end up appearing in the upcoming spinoff.

“There’s definitely crossover,” Kripke said in a recent interview with Deadline. “And we’re doing our best to design a universe that sees some of the issues and storylines in [The Boys] season 3 hand off to the first season in Varsity. Like there’s a presidential campaign happening in the background of that season, and there’s certain things that are happening at that school that are both in reaction to season 3 of The Boys. There’s Soldier Boy (Jensen Ackles), etcetera, but also some new storylines that are happening in that season of the spinoff that we have to pick up and take into season 4 of the [main] show.”

What will Varsity be about?

Officially titled The Boys Present: Varsity, the spinoff is described as “part college show, part Hunger Games — with all the heart, satire, and raunch” of the parent series. The spinoff is “an irreverent, R-rated series that explores the lives of hormonal, competitive supes as they put their physical, sexual, and moral boundaries to the test, competing for the best contracts in the best cities.”

First announced in October 2020, Varsity takes place at the Vought-run Godolkin University School of Crimefighting, the only college in America attended exclusively by superheroes. Godolkin University is named after John Godolkin, a character introduced in The Boys comics series as the leader of the G-Men, a twist on both the X-Men and Professor X from Marvel Comics. Kripke confirmed in the same month that the spinoff would focus on the G-Men, who was mentioned in season 1 of the parent series.

“Much like Mork & Mindy spun-off from Happy Days — which is an insane and true fact — our spinoff will exist in the Vought Cinematic Universe, yet have a tone and style all its own. It’s our take on a college show, with an ensemble of fascinating, complicated, and sometimes deadly young supes,” said Kripke of Varsity in September 2021 in a statement announcing the series pickup of the spinoff, which is being helmed by Agent Carter showrunners Michele Fazekas and Tara Butters.

Amazon Prime Video has yet to release a trailer for the spinoff, but just last month, CBR shared three exclusive photos from the set of the series. The first pic shows a statue of Lamplighter covered in trash bags. As fans can remember, Lamplighter was played by Shawn Ashmore in season 2 of The Boys. The second picture shows a “statue” of Translucent, the invisible supe portrayed by Alex Hassell in season 1. The third and final photo depicts an on-campus poster of Schwarzenegger’s Golden Boy. You can see the pictures here.

The spinoff doesn’t have a release date yet. But filming for the series started at the University of Toronto in May 2022 and in Claireville Conservation Area, Brampton in July. Production on the first season of the show is expected to wrap in October.

Varsity is The Boys’ second spinoff. The show’s first spinoff is The Boys Presents: Diabolical. Premiered on Amazon Prime Video in March 2022, the anthology series tell side stories in the universe of The Boys using various animation styles. You can watch the trailer for the spinoff below: