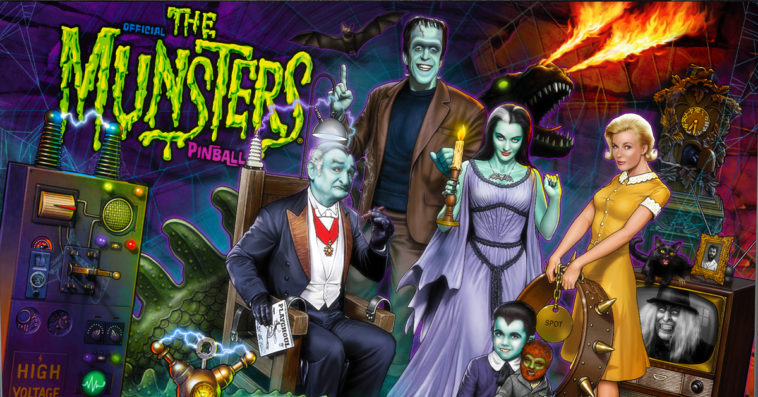 Are you a huge fan of the CBS sitcom The Munsters? If you are, then this new line of pinball machines is especially made for you!

In celebration of the 55th anniversary of The Munsters this year, Stern Pinball has announced the availability of its latest pinball machines inspired by the supernatural comedy TV show. Featuring the whole Munsters family — Herman, Raven, Lily, Spot, and Grandpa — these frightfully funny and action-packed pinball machines will transport players to 1313 Mockingbird Lane, allowing them to recall some of their favorite moments from the series.

For those who aren’t familiar with The Munsters, the show follows the home life of a family of benign monsters composed of Frankenstein-type head-of-the-household Herman, his vampire wife Lily, their half-vampire, half-werewolf son Eddie, their “normal” teenage niece Marilyn, as well as the sentimental over-the-hill vampire Grandpa.

“The Munsters are iconic and timeless, and it was time to create a pinball experience around this freaky-fun family.  With beautiful artwork inspired by the supernatural family, this theme is perfect for a pinball machine,” said Gary Stern, Chairman and CEO of Stern Pinball, Inc.

All models have a custom sculpted Herman bash toy with a magnetized ball catch. Also included in each of the three models are a pop-up Spot bash toy hidden under the left ramp, a custom sculpted Drag-U-La toy car parked near a left shooter lane kicker, and a metal turn-around, flip-up ramp.

The Premium and Limited Edition models both feature Grandpa’s laboratory, a lower playfield that has 2 mini flippers, 2 ramps, a Grandpa bash target, a digital number display, and a multiball feature.

Available through authorized Stern Pinball distributors and dealers around the world, the Pro model retails for $ 5999, the Premium model for $7599, and the Limited Edition for $8999.