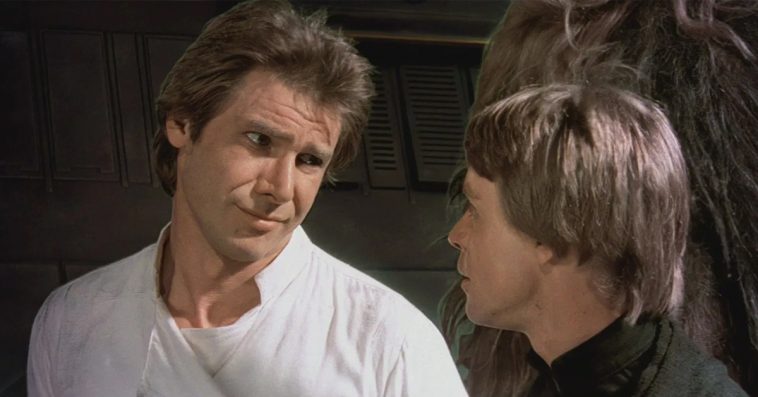 Did Mark Hamill really get a kiss from Harrison Ford while filming a scene for Star Wars: The Empire Strikes Back?

Last week, Twitter user @lukeskysolo wrote on the microblogging site that Ford kissed Hamill in a deleted scene from the movie. Supporting her claim is a screenshot of a supposed quote from Hamill, which reads, “It’s like the scene where I’ve been hurt and Harrison comes in and says, ‘Hey, you don’t look so bad to me. In fact, you look strong enough to pull the ears off a gundark.’ I reply, ‘Thanks to you,’ and his line was supposed to be, ‘That’s two you own me, junior.’ But he didn’t say it… he gave me a little kiss.”

Based on the image that comes with the alleged quote from Hamill, the deleted scene happened moments after Han (Ford) saved Luke (Hamill) from dying after getting caught out in the freezing Hoth winter.

Just found out Harrison ford kissed mark hamill in one of the deleted scenes they really screamed skysolo rights! pic.twitter.com/ijTZbOh8b1

Hamill liked the tweet, and though he neither confirmed nor deny the claim, he did leave a cheeky comment that led Luke and Han shippers, aka Skylo fans, go wild.

Hamill’s “I never kiss & tell” comment has received several reactions from fans, with most of them expressing their desire to see the supposed deleted scene.

I need this to be leaked, Mark.
Like I need air in my lungs, damn you. pic.twitter.com/f1yCpiA0EA

SOMEONE LEAK IT PLEASE

Unbeknown to some fans, this isn’t the first time Hamill has addressed the rumor. In an interview with journalist Jonathan Capehart on the Washington Post’s podcast, Cape Up, last May, the actor said that he didn’t remember sharing a kiss with Ford. “Honestly, I’d love to tell you the story and you’d think I’d remember,” said the actor, “but I honestly don’t remember kissing [Harrison Ford]. On the mouth or on the cheek?”